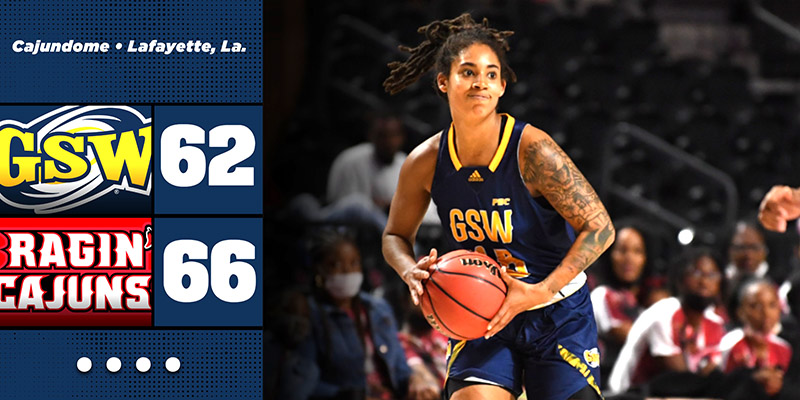 LAFAYETTE, LA – The Georgia Southwestern State University women’s basketball team went on the road to Lafayette, Louisiana to take on the reigning NCAA Division-1 Sun Belt Conference champions: the Louisiana-Lafayette Ragin Cajuns, on Sunday night, October 31. The game was close throughout and filled with runs by both teams, but the Lady Hurricanes fell to ULL 66-62.

At the half, GSW and ULL were tied at 29-29, with the Lady Hurricanes being white-hot from the three-point line in the first two quarters. They continued to shoot the ball well in the third quarter and made a run that would give them an eight-point lead.

The Ragin Cajuns responded with a run of their own to end the third quarter with a three-point lead, but GSW battled during the remainder of the fourth quarter and had the lead with 16 seconds left, eyeing an upset over a Division 1 school.

However, ULL made two free throws with 15 seconds left to take the lead and would hold onto to end the Lady Hurricanes’ upset bid.

GSW will begin its regular season on Friday, Nov. 12, at 3 P.M. against Mars Hill University in the SAC/PBC Challenge at Newberry College in Newberry, SC. They will then play Newberry on Saturday, November 13 at 2 p.m. The Lady Hurricanes’ first home game at the Storm Dome will be on Monday, November 15, against Middle Georgia State. Tip-off is scheduled for 7 p.m.