GSW Men’s Basketball faces off against Clemson in exhibition 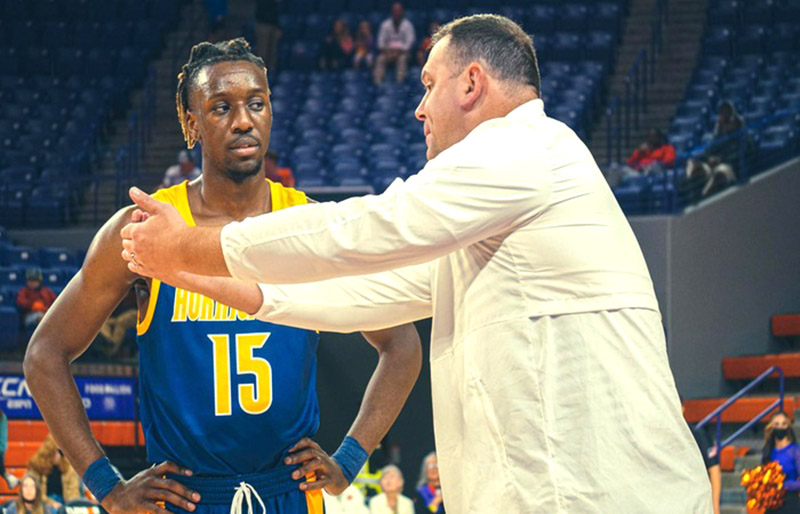 CLEMSON, SC – The Georgia Southwestern Men’s Basketball Team (GSW) played its first exhibition game of the season on Monday night, November 1, against the Clemson University Tigers. The Hurricanes started out well, keeping the game tied halfway through the first half, but the Tigers went on a run late in the second half to take a 36-25 lead at the break.  CU then pulled away in the second half, with the Hurricanes struggling to keep the Tigers out of the paint. As a result, CU went on to beat the Hurricanes 77-51 at Littlejohn Coliseum.

The bright spot for the Hurricanes was senior forward Kevin Kone, who led GSW in scoring with 10 points. In addition to his scoring, Kone added five rebounds and three steals in the contest.

PJ Hall led the Tigers in scoring with 23 points on 11 of 14 shooting.

Up next for the Hurricanes is a road trip to Jacksonville, Alabama to take on another NCAA Division-I school, Jacksonville State, on Wednesday. November 3 in an exhibition game. JSU returns a double-digit number of players from the squad that finished 18-9 a year ago and advanced to the semifinals of the 2021 Ohio Valley Conference Tournament. Tip-off is scheduled for 7:30 p.m. EST.

The Hurricanes will play one more pre-season exhibition game at home in the Storm Dome against Emory University on Saturday, November 6, at 3:30 p.m. before beginning the 2021-22 season for real with a home game against Albany State on Wednesday, November 17. Tip-off for that game is scheduled for 7:30 p.m.