The Artist and the Doughboy 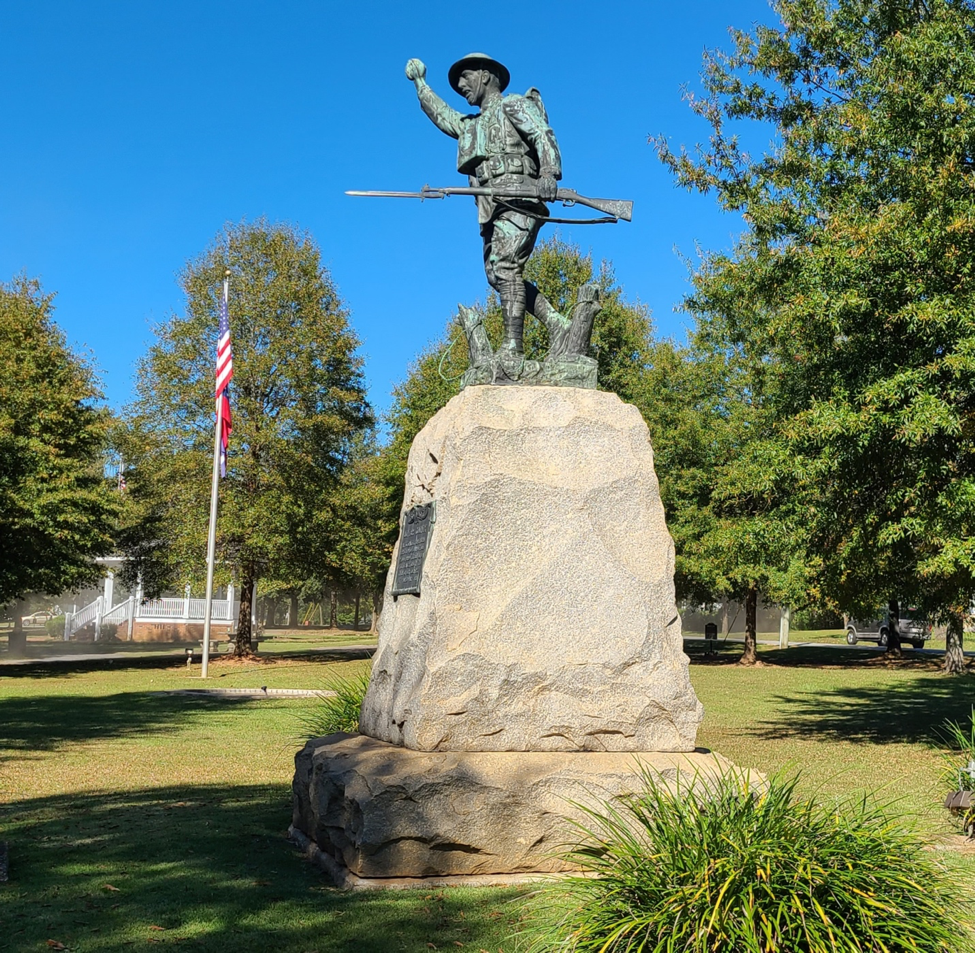 A century ago, on November 11, 1921, President Warren G. Harding dedicated the Tomb of the Unknown Soldier at Arlington National Cemetery. Americus residents gathered that same day to commemorate the Great War (1914-1918) in their own way. The 7-ft tall, 200-lb bronze doughboy—a popular nickname for U.S. soldiers—was the second statue frozen in a charging stance through downtown Americus. In 1900, the United Daughters of the Confederacy erected a 1,700-lb marble Confederate soldier in front of the county courthouse. Event planners in 1921 linked generations by placing Confederate veterans and their sons alongside seven Gold Star mothers of soldiers from the recent world war. In an era of rigid racial segregation, local children stood on opposite sides of the intersection and sang “The Star-Spangled Banner” and “In Flanders Field” as part of the ceremony. 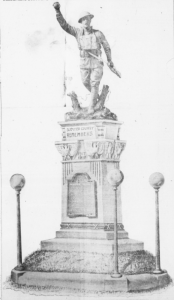 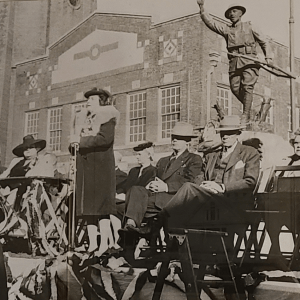 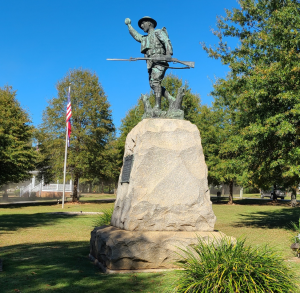 Similar dedications took place across the United States, but this statue had unique significance to Americus. Designed by Ernest Moore Viquesney (pronounced Vick-cane-ey) and sold from Walter Rylander’s car dealership (now Habitat for Humanity International headquarters), the Spirit of the American Doughboy statues were a lucrative business. About 140 communities across the country paid roughly $2,000 each for this specific design. Individual consumers bought more than 25,000 doughboy statuettes and lamps for as little as $5 each. The metal doughboy linked an Americus artist and two local businessmen to commemorative efforts around the country.

It was no coincidence the doughboy statue lightly resembles Civil War monuments. The high-water mark for commemoration at Andersonville National Cemetery brought the Indiana-born Viquesney to Clark’s Monumental Works on Jackson Street. The company worked on memorials to Pennsylvania, Minnesota, Connecticut, Wisconsin, and Illinois soldiers at Andersonville during the years Viquesney lived in Americus. The artist gained wider attention when he proposed a 110-ft tall “Peace Memorial” for Fitzgerald, Georgia, in 1913. The city never built the monument, but it signaled Viquesney’s growing reputation as a Civil War commemorative artist.

Despite his sculpting expertise, it was electric window displays—as well as an active social calendar from weddings to Halloween parties—that first gave Viquesney a local name. In 1907, the Americus Times-Recorder reported that Viquesney had finished a display at the Pinkson Company building on Jackson Street. “It will pay to walk around past this big store this evening,” the paper predicted, “if only to see these window displays.” While living at 154 Taylor Street, E. M. and Cora Viquesney often appeared in the newspaper’s society columns. Yet the couple never stayed in one place for long. During their Georgia years, the Viquesneys also lived in Atlanta, Canton, and Marietta.

The artist’s entrepreneurial spirit, combined with his itinerant occupation, makes it difficult to separate truth from fiction in his autobiographical and promotional writings. English professor Steven Trout describes Viquesney as “a fascinating individual” who appears today more like “P.T. Barnum than Michelangelo.” His advertisements proclaimed accolades and accomplishments that were, at best, embellishments and, at worst, fraudulent. It was all part of his performative element—the Barnum-esque showmanship—of Viquesney’s career.

The artist profited from a rising tide of both consumerism and white supremacism in the early twentieth century. In 1908, Viquesney opened the “Majestic,” a theatre on Lamar Street. Unlike theatres that segregated patrons by floor or partition, Viquesney’s Majestic segregated by complete exclusion. “The new theatre is exclusively for white patrons, another decided novelty in Americus,” the Times-Recorder applauded, “and one to be appreciated by patrons so often outraged by the boisterous guffaws of the black gallery.” In 1923, while recovering from a downturn in his doughboy fortunes, Viquesney created a Ku Klux Klan figurine lamp. “If you love America—burn a Klan-Lite in your home,” his advertisement read, “whether you are a member of the organization or not.” He was rumored to have consulted for the design of Stone Mountain.

The Rise of the Doughboy Monument

Although the United States did not complete a National World War I Memorial until 2021, the Great War produced an outpouring of public remembrance—especially at the local level. The Americus and Sumter County Garden Clubs designed “Memorial Mile,” an arrangement of Magnolia trees and granite monuments, on Highway 19. The “John D. Mathis” American Legion Post in Americus takes its name from a local officer killed at the battle of Chateau-Thierry. Patrons of the James Earl Carter Sr. Library (still named for a man who enlisted during World War I) will find that older books contain an inscription for the “Wade Lott Memorial Library.” Lott, an alumnus of the Agricultural & Mechanical school that became Georgia Southwestern State University, died from influenza at Parris Island in 1918. Erecting a doughboy monument was one of many ways to commemorate the Great War.

Viquesney began specializing in Great War monuments almost as soon as that conflict ended. In October 1919, Times-Recorder first reported that Viquesney had completed designs for a monument with a stone base and an “Over the Top” statue. He patented the Spirit of the American Doughboy in 1920 and began advertising the statues in 1921. According to some sources, the American Legion selected Viquesney’s design to memorialize its fallen in a violent clash between Legionnaires and the International Workers of the World at Centralia, Washington, on Armistice Day in 1919. The legionnaires backed out—and chose another sculptor—when they discovered Viquesney’s monument was not cast bronze.

What may have disappointed the Legionnaires also helped sell scores of statues and thousands of statuettes. They were cheap. Rather than solid bronze or stone, Viquesney constructed the doughboy from sheets of metal welded around an internal frame. The first statue stood on display at the Windsor Hotel until it was shipped to Nashville, Georgia, in 1921. That same year, Viquesney and Rylander began producing statuette doughboys in the back of the latter’s car dealership. The Times-Recorder that the business partners had checks and money orders for 5,000 statuettes.”

Excitement over the doughboy led Sumter County to announce its own campaign to commission a statue in the summer of 1921. “The memorial is to be to every service man in Sumter County, white and black,” the newspaper promised, “and not confined to Americus.” While the final monument came out smaller than promised—the 7-ft doughboy did not stand atop a 10-ft pedestal—Americus unveiled its prized statue on the third anniversary of Armistice Day.

The Eclipse of the Artist

The doughboy’s popularity and financial success made it the target of a copyright lawsuit. The American Art Bronze Foundry sued Viquesney for stealing John Paulding’s copyrighted “Over the Top” design. According to Steven Trout, Viquesney either lost the suit or settled out of court. Either way, the Americus artist began selling off business interests in early 1922. Less than two months after dedicating the Americus doughboy, Walter Rylander came into full possession of the business.

The lawsuit did not represent the end of Viquesney’s long and tumultuous career. He moved back to Indiana and continued selling commemorative statues and statuettes for the rest of his life. By the end of the 1920s, Viquesney even gained back his doughboy business. Yet time took its toll. After the death of his second wife, Viquesney wrote his own obituary and ended his life by running his car inside a sealed garage. The popularity of the doughboy monument endured well beyond the artist. A group of devoted Viquesney enthusiasts, calling themselves the “Doughboy Searchers,” have scoured small towns to document Viquesney’s statues in minute detail. They are the unofficial keepers of the Spirit of the American Doughboy.

What accounts for the doughboy’s popularity then and now? Jennifer Wingate proposes that the doughboy served the “antiradical” ideology of the American Legion as a symbol of conservative, patriotic, and manly virulence amid a Red Scare and in the aftermath of the deadly 1918-20 influenza pandemic. In a similar way, Steven Trout argues the heroic doughboy charging through no-man’s land while awkwardly throwing a grenade did not reflect a disillusioned, “Lost Generation.” Neither did it represent the memory of the anti-war I.W.W. “Wobblies,” and it may not have appealed evenly across a racially divided America. After all, despite promises in the Times-Recorder of a monument to all soldiers, the only grief-stricken mothers of fallen soldiers on stage were white. The statue is historically significant not only because of its popularity but also because of its contradictions, the ambiguities of the artist’s life, and the uncertain meaning of his art to Americans in the 1920s.

The Spirit of the American Doughboy and the artist who popularized it remain an important layer of this city’s history. As an eccentric Civil War cemeterial artist who became famous for a World War I monument, Viquesney linked generations of commemoration. At the same time, the doughboy—moved to Rees Park along with the Confederate Statue in 1947—connected Americus to the most popular World War I statue ever produced.