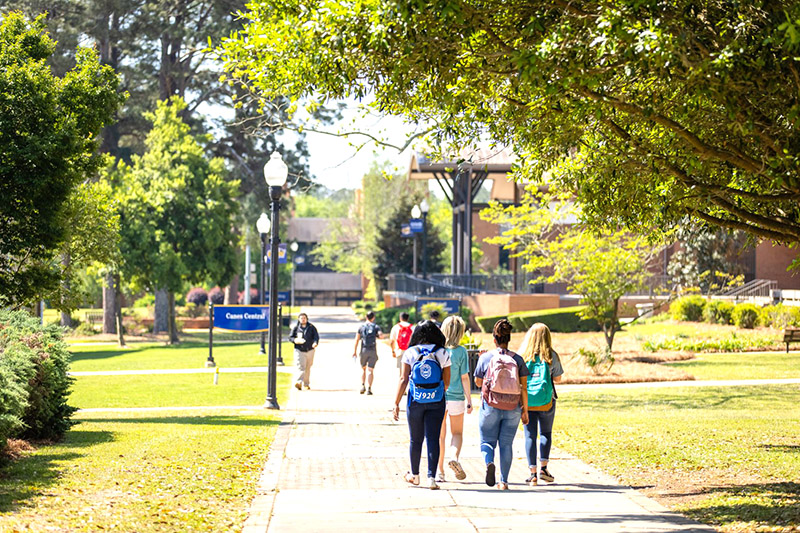 This is a picture of some GSW students waling on campus. In a report put out by the University System of Georgia (USG), GSW’s total Fall 2021 enrollment is at 3,158, which is just four students down from last year’s record-breaking year. Submitted Photo

Among the system’s 26 institutions, the USG annual report stated enrollment increased at five, decreased at 20, and “remained unchanged” at Georgia Southwestern. Overall, the USG saw a decrease of 851 students or 0.2% from Fall 2020 to Fall 2021, reaching a total of 340,638 students. This is the first statewide decrease in enrollment since 2013.

“While the enrollment trend across the state and the nation seems to be in decline, we are proud that GSW remained relatively the same,” said GSW President Neal Weaver, Ph.D. “It is a challenging time for higher education, but Georgia Southwestern has fared well. We remain focused on recruiting and retaining students by offering programs relevant to today’s economy, ensuring their success in these programs, and enhancing the overall campus experience.”

Among the nine state universities, Georgia Southwestern had the lowest decrease at 0.1%, calculating the four-student difference from Fall 2020 at 3,162. Overall, Georgia’s state universities saw a decrease in enrollment at an average of 3.7%.

GSW continues to see an increase in graduate students in the College of Business and Computing, College of Education, and College of Nursing and Health Sciences. This can be attributed to GSW’s quality, accredited programs that are both top-ranked regionally and nationally at an affordable cost, many of which are offered online.

These enrollment numbers were released in the USG’s “Fall 2021 Semester Enrollment Report,” which breaks down enrollment by institution, class, race and ethnicity, in-state, out-of-state and international students, as well as gender and age.

USG Acting Chancellor Teresa MacCartney said, “I appreciate all the challenges our students have overcome as they have persisted on their journey toward their degree from a USG institution. I applaud our presidents, faculty and staff for all they’ve done to make this fall successful.”

The USG’s full report can be found at this website: https://www.usg.edu/assets/usg/docs/news_files/Fall_2021_SER.pdf