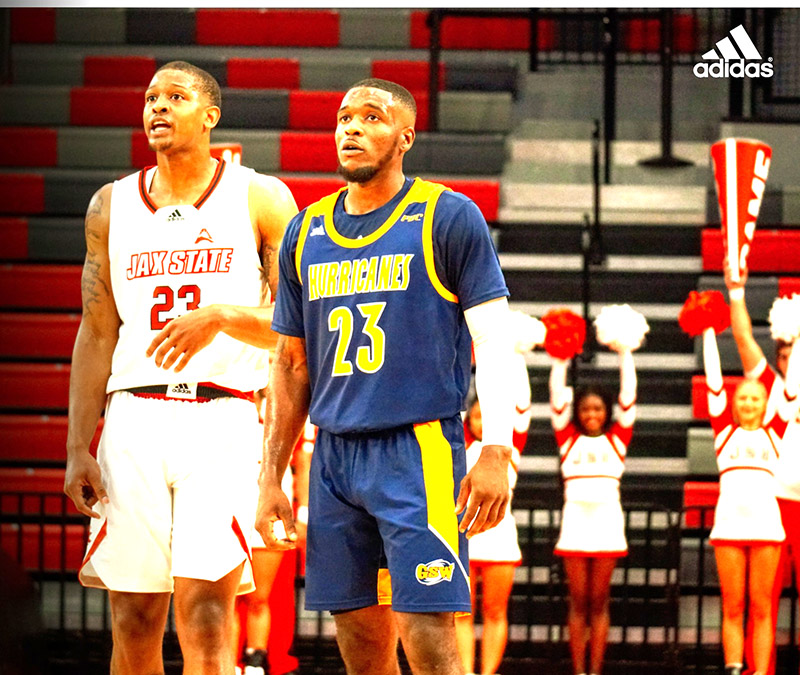 GSW senior guard Donte Tatum (23 in blue) scored 18 points and hauled down five rebounds in the Hurricanes’ 82-63 loss to Jacksonville State in GSW’s second exhibition game of the season. Photo by JSU Athletics

JACKSONVILLE, AL – The Georgia Southwestern State University men’s basketball team competed against NCAA Division 1 opponent Jacksonville State University on Wednesday, November 3, in its second exhibition of the year. The JSU Gamecocks are in their first year of the Atlantic Sun Conference and were previously a member of the Ohio Valley Conference up until this year. The Hurricanes showed improvement in their second exhibition, with JSU returning a veteran core from its 2020-21 team that went 18-9 and reached the conference tournament semifinals.  However, the Hurricanes were unable to slow down the Gamecocks’ offense and fell to JSU 82-63.

The Hurricanes were led by senior guard Donte Tatum, who had 18 points in the contest on 3 of 3 shooting from beyond the arc. The Gamecocks went on a key 10-0 run in the second half to all but end the Hurricanes’ chances on Wednesday night.

The Hurricanes will return to action for the first time this season in the Storm Dome when they host the Emory University Eagles in their final exhibition on Saturday, November 6, at 3:30 p.m.

Information in this article was obtained from both the GSW and JSU athletic websites: www.gswcanes.com and www.jsugamecocksports.com.