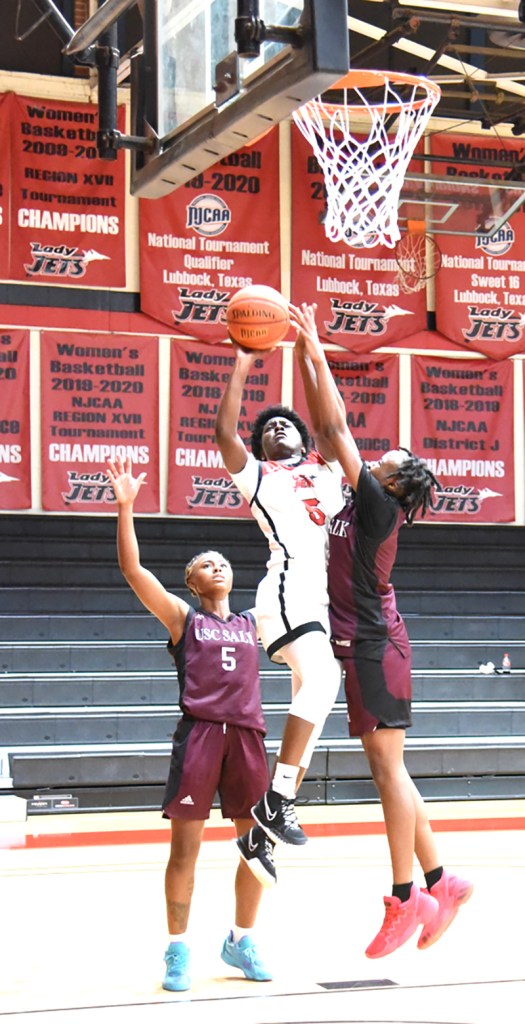 AMERICUS –  “It was not pretty, but it was a win and something to build on,” said South Georgia Tech Women’s Head Basketball Coach James Frey. This was Frey’s post-game comment after his team blew an early 24 – 5 lead but hung on to take an 81 – 76 victory over the University of South Carolina Salkehatchie (USCS) in the Lady Jets’ first game of the 2021 – 2022 season on Monday, November 1, at the Hangar.

The Lady Jets opened the season with #9 in the nation in the NJCAA pre-season women’s basketball standings. This is despite the fact that only three players are returning from the successful 2020 – 2021 season that saw the Lady Jets advance to their fifth consecutive NJCAA national tournament and finish the COVID pandemic year with a sweet sixteen finish.

“The preseason ranking is great, but now we have to maintain or earn that ranking,” said Frey.  “USC Salkehatchie is a good team and very well coached.  They finished in the Elite Eight in Division II last year.  We knew they were going to be tough, but we just made way too many mistakes.”

The two teams both scored 19 points in the third quarter and USCS outscored the Lady Jets 23 – 21 in the fourth but the large first quarter lead allowed South Georgia Tech to hang on to the 81 – 76 first regular season victory.

Freshman shooting forward Alexia Dizeko from Sion, Switzerland, led the Lady Jets in scoring with a total of 25 points.  Maikya Simmons, one of SGTC’s three returners, was the next leading scorer with 13 points.  The sophomore point guard also had three rebounds and seven assists.  Three more freshmen, Mame Thiaw, a forward from Kaka, Senegal; Laurie Calixte, a freshman point guard from Quebec, Canada; and Fanta Gasama, a center from Mataro, Spain; closed out the double digit scoring with 10 points each.

Freshman forward Camryn James from Macon, Georgia had nine points.  Sophomore Kamiya Hollingshed, a returning guard, accounted for three points, and then Susan Yepes, from Medellin, Columbia; closed out the scoring with one point.  The third returner, Tena Ikida, a sophomore center, was out with an injury.

The two leading scorers for USCS, Amari Hunter and Jasmine Norman, had 26 and 25 points respectively for the Lady Indians.  Antwanique Wally came off the bench with Norman and came away with 15 points.

“Our defense has got to improve,” said Frey.  “We have 10 freshmen and we are still learning how to play together.  We know we have our work cut out for us, but it was good to get that first win.” 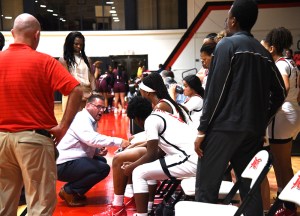 SGTC head coach James Frey is shown above talking with the Lady Jets during a time out.
Photo by Su Ann Bird

The SGTC Lady Jets will be back in action on Friday, November 5, when they host Denmark Technical College at 6 p.m.  The Jets will play Frankly Prep Academy at 4 p.m. at part of that double-header.  Both teams will be back in action on Saturday, November 6th when the Jets host New Rock Prep Academy at 12 p.m. followed by the Lady Jets matching up against Southern Union State Community College at 2 p.m. in the Hangar on the Americus campus.

The Lady Jets will host their first Georgia Collegiate Athletic Association (GCAA) game on Saturday, November 13 at 1 p.m. against Andrew College and then will face Georgia Highlands in Americus on Tuesday, November 16 at 5:30 p.m.   The Jets will not play at home again until Tuesday, November 20, when they host Action Sport Academy at 2 p.m.