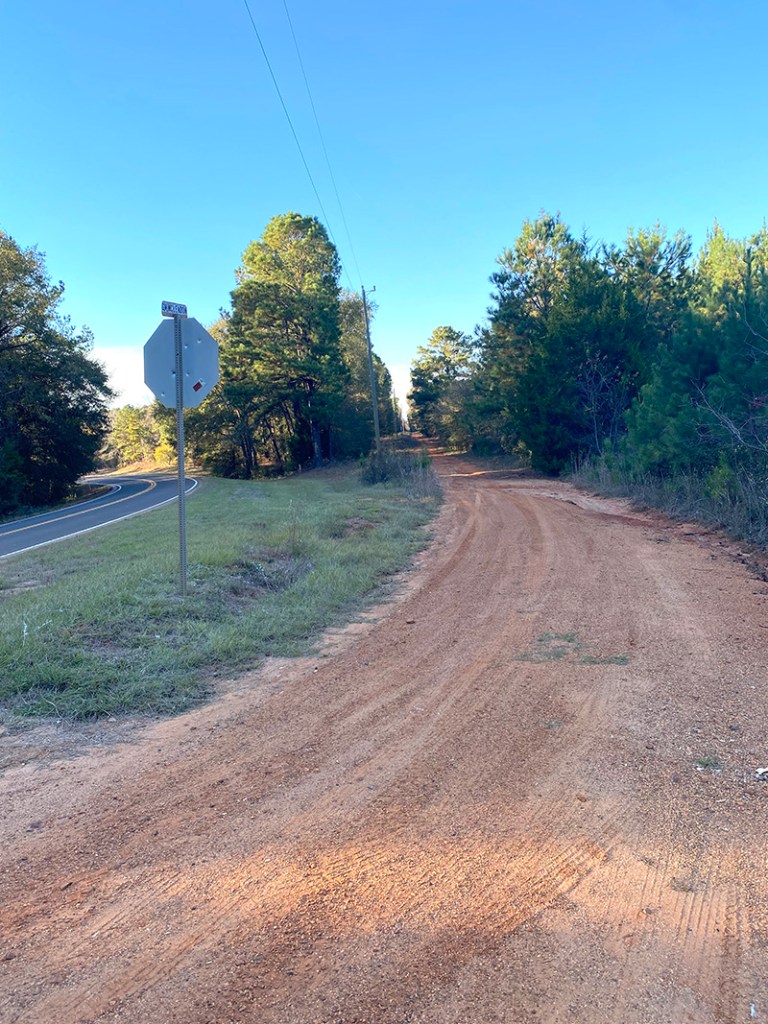 This is G.W. McLendon Road. It begins at State Route 228 and goes for a little less than a mile to the Macon County Line. People who own property in this area, along with Nigel Poole, McLendon’s great grandson, are asking the county to have this portion of the road permanently closed and abandoned. Photo by Ken Gustafson

AMERICUS – The Sumter County Board of Commissioners (BOC) held its monthly work session on Tuesday, November 9, at the Sumter County Courthouse. The BOC dealt with several ongoing issues throughout the county, with one of them being whether or not to approve the abandoning process for G.W. McLendon Road.

All of the commissioners, with the exception of Clay Jones, were at the meeting.

The work session was still not open to the public due to concerns regarding COVID-19, but was streamed live via Zoom.

According to Sumter County Department of Public Works Director Jim Littlefield, this road runs from State Route 228 just north of Andersonville to the Macon County Line and that portion of the road is dirt. Littlefield also stated that many yeas ago, the road was part of State Route 195, but that part of the road was decommissioned by the state in the early 80s and deeded back to the county. Littlefield also stated that the portion of the road from State Route 228 to the Macon County Line, which is a little less than a mile, has been closed since October of 2019 because of the massive amount of rain that has come through that area. The late G.W. McLendon, whom the road is named after, is the great grandfather of Nigel Poole, who serves as Sumter County’s Emergency Management Director. Littlefield mentioned that Poole, who is the Administrator of McLendon’s estate, has asked that the portion of the road from State Route 228 in Sumter County to the Macon County Line be permanently closed and abandoned. He also stated that all of the landowners who own property in the area are in favor of having this portion of the road permanently closed and abandoned and are bringing this request to the BOC.

In a separate interview with the Americus Times-Recorder, Poole stated that a bridge along the road was washed out about five years ago and that the people who own property in that area would like to see this portion of the road declared permanently closed and abandoned so that no one drives on it and ends up getting his or her vehicle stuck.

In other news from the BOC Work Session, the BOC also unanimously approved the Spy Glass Snapshot Auto Agreement. According to the website www.thesiliconreview.com, the Spy Glass Group is the largest independent telecom audit firm in the country and it assists other companies, along with local governments, in helping them save money on their telecommunication bills.

Waddell stated that this agreement would assist the county in paying its Verizon and AT&T bills and that the county would receive 50 percent of the money back and the people who are trying to save the county money would also receive the other 50 percent and if they don’t save the county anything, there is no cost to the county. Waddell added that Interim County Operations Administrator Rayetta Volley had stated that this process was tried in Crisp County and as a result, the county got $15,000.00 back in both current and future savings. Volley affirmed what Waddell had said and brought in Matt Halata, a representative from Spy Glass who was on the line via zoom, to discuss the matter. Halata stated that Spy Glass has done a lot of work with Lee, Crisp, Oglethorpe, Colquitt and Dodge Counties in helping them save money on their telecommunication bills. Waddell asked Volley if she felt comfortable with implementing an agreement with Spy Glass without the help of an attorney and Volley replied, “yes”. Waddell then asked if anyone else had any questions about the agreement and no one did. Waddell then made a motion to approve the Spy Glass Snapshot Audit Agreement to specifically look at the county’s Verizon and AT&T bills. Commissioner Roberson made a motion for approval and Commissioner Smith seconded the motion. The BOC voted and the approval passed unanimously. 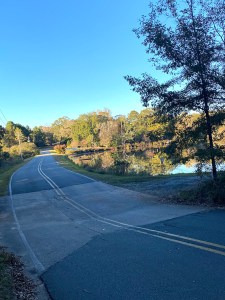 This is the private road that runs along the top of the dam on Hancock Lake. This private road can only access the Lake Hancock neighborhood, which is located on the far side of the lake, and the only way out of that neighborhood is by way of this private road. There is a drainage pipe underneath the dam that is damaged and needs to be replaced. A water main that provides water to the citizens living in that neighborhood also runs through the dam and is in danger of breaking should the defective pipe collapse.
Photo by Ken Gustafson

Waddell mentioned at the work session that the issue that the neighborhood along the lake is facing is that there is a pipe underneath the road that is collapsing. “Since it is a private road, we have no jurisdiction and can’t do anything with it,” Waddell said. Waddell also stated that the homeowners association that runs the neighborhood is aware of that fact, but is also aware that it could cost anywhere from $50,000.00 to $100,000.00 to get the pipe fixed or replaced. Waddell added that if that pipe were to collapse, the county does bare some responsibility to get the citizens of that neighborhood in and out. Being that there is only one way in and one way out, this is a serious issue in regards to ambulance and fire issues, as well as bussing kids to and from school and picking up trash.

In a separate interview with the Americus Times-Recorder, Brandon Parks, who is head of the homeowners association and has lived in the neighborhood since 2008, contacted Waddell and Americus City Councilman Daryl Dowdell about the issue.

“There are approximately 40 residences back here,” Parks said. “We’re n the city limits barely and there is a 60-foot section of pipe that runs underneath the dam. It drains the lake and goes through the dam and goes back into Town Creek and Town Creek continues to flow.” Parks reiterated the point that the road that goes over the dam is the only way in and the only way out of that neighborhood and that fire trucks, police vehicles, school busses and waste management vehicles can only get in and out that way. “The city’s water main runs through the dam back here to us because we’re on city water and there are five fire hydrants back here that are pressurized by the city water main,” Parks told the ATR. “This pipe is now 51 years old.”

Parks added that when he was talking to County Public Works Director Jim Littlefield about the situation, Littlefield told him that pipes never last that long and that the neighborhood has gotten its money out of it. Parks went on to explain that the section that runs from the drain box in the lake before it gets to the dam is compromised and that Littlefield pointed out to him that the pipe has a crack in it.

Parks added that he and the other homeowners in the neighborhood are exploring all of their options and that he has spoken to both Waddell and Dowdell about the matter. “We’re just trying to figure out what our options are here,” Parks told the ATR. “It’s not a cheap fix. Our homeowners association dues are just $50 a year and we don’t have nearly the amount of money to fix the dam, or to fix the drainage issue as what it would cost, with the cost of pipe right now and everything.”

At the BOC Work Session, Waddell stated that he plans to meet with the homeowners association of the Lake Hancock neighborhood to discuss an alternative backup plan if something were to happen because he doesn’t want the neighborhood to be at a point where they would have to react after something bad happens. “If a house catches on fire, somebody has to get back there to those people to stop it because anything can happen,” Waddell said. “One house catches on fire, you could have five houses catch on fire and then it just creates a nightmare back there. We’ve got other places in the county. I’m not trying to say that this one area is more important than anyone, but we could potentially have a bad problem. It goes back to the private road that separates. We have to go over this private road to offer the services that we do.” Waddell added that in the event that the dam breaks, along with the water main that runs through the dam, there would be no water to put out any fires that might take place in the neighborhood because the water is gone. “It’s a potential for a mess to happen, “ Waddell said. He reiterated that both the city and the county need to come up with a solution because the streets in the Lake Hancock neighborhood are currently county roads and the citizens who live in that neighborhood are owed assistance from the county. County Attorney Kimberly Reid suggested that the BOC discuss this in its Executive Session as it relates to other issues to be discussed during that time and Waddell agreed. According to Parks, he and the other members of the homeowners association are not sure where to go from here at this time. “We’ve had three different people come out and kind of give us their estimates of what can be done,” Parks told the ATR. “We’re just not really sure. We’re looking to see if there’s any public money available, especially with the CARES Act funding that just got passed and then the infrastructure bill, which I know is winding its way through D.C. But right now, we’re gathering information about how bad is it and what will it take to fix it.” No official approvals were made by the BOC regarding the Lake Hancock situation and the process is ongoing.

In other news from the work session, other approvals were unanimously voted on and passed. They are as follows: