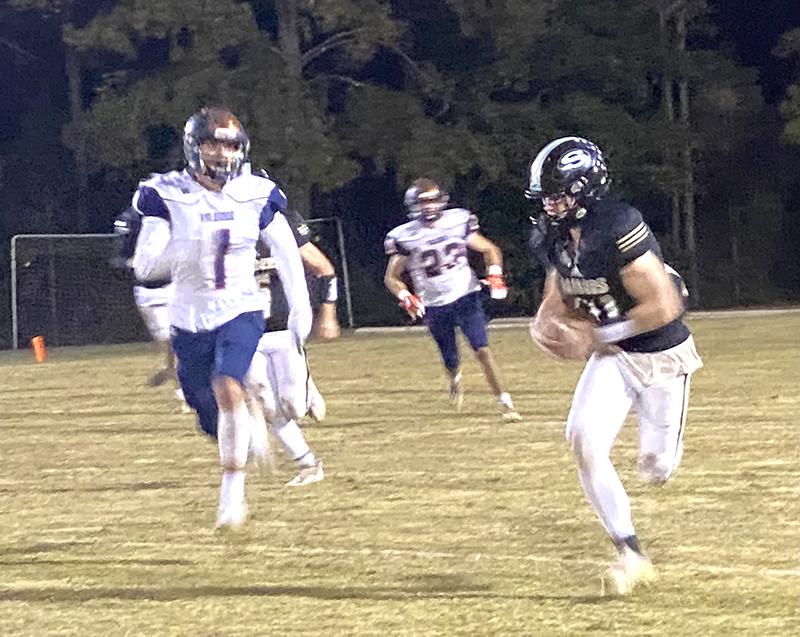 Southland Academy running back Hudson Collins caught a pass from quarterback Chase Ledger and ran the ball 48 yards down to the VWS 18-yard line in the closing seconds of the first half. Photo by Ken Gustafson

AMERICUS – The Southland Academy Raiders (SAR) came into their Georgia Independent School Association (GISA) Class AAA State Playoff first round game against their region opponents Valwood (VWS) with the hopes and expectations of taking care of business and moving on to the second round. Three weeks ago, the Raiders took down VWS 23-6 in Hahira. However, this time around, SAR was unable to stop VWS running back Noah Pettigrew. The Valiants’ senior bell cow running back scored four rushing touchdowns to lead VWS to a 35-21 victory over the Raiders on Friday, November 12, at Harvey Simpson Stadium.

With the loss, the Raiders’ season comes to and end and they finish the season with a record of 5-6.

“The seniors did a great job all season long of leading and we hate it for them,” SAR Head Coach Rod Murray said. “Our kids played hard all season long. There’s no question about that. The coaches had them ready to go. When you coach and play the game of football, you’re not going to win all the time, but we are proud of our effort and we’re proud to be here at Southland Academy. That’s for sure.”

The Raiders won the toss, but elected to defer until the second half.  For most of the first quarter, it was a scoreless stalemate between both teams, but in the closing minutes of the quarter, the Raiders came up with a big special teams play when Buddy Brady blocked the VWS punt and Will Godwin recovered the ball at the VWS 43-yard line.

“When I was lined up, there was no one in front of me, so I just ran for it and dove,” Brady said.

Thanks to a strong running game from SAR running backs Hudson Collins and David Dickens, the Raiders were able to move the ball down to the VWS 1-yard line. Then on second and goal from the 1, quarterback Chase Ledger scored on a quarterback sneak. The extra point by Henry Johnson was good and SAR had a 7-0 lead with 1:22 to go in the first quarter. 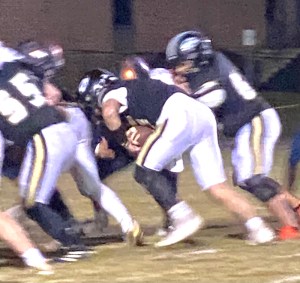 However, the Valiants would have a response. On second down and 11 from the SAR 45, quarterback Dru Womack completed a 45-yard touchdown pass to Tajh Sanders. The extra point by Ean Henry was good and the game was tied at 7-7 with 9:45 to go in the first half.

The Raiders were hoping to respond on their next possession, but on the ensuing kickoff, SAR fumbled the ball and it was recovered by the Valiants at the SAR 29-yard line. VWS took advantage of its good fortune and orchestrated a drive that resulted in an 11-yard rushing touchdown by Pettigrew. The extra point by Henry was good and the Valiants had a 14-7 lead with 6:54 to go before halftime. 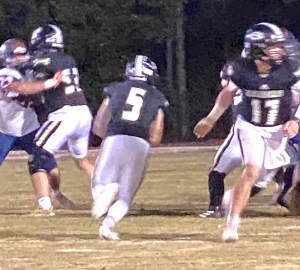 Southland Academy running back David Dickens (#5) runs the ball down towards the goal line. The Raiders would later score their first touchdown of the game when quarterback Chase Ledger scored on a quarterback sneak.
Photo by Ken Gustafson

The Raiders were able to respond on their next possession. They were able to move the ball down inside the VWS 20-yard line. Ledger would then find Buddy Brady on a pass play, moving the ball down to the Valiants’ 2-yard line. Then Ledger finished off the drive by running behind his offensive line and scoring his second touchdown of the night on a quarterback sneak. The extra point by Johnson was good and the game was tied at 14-14.

However, the Valiants fought back with another drive that resulted in Pettigrew’s second rushing touchdown of the night. The extra point by Henry was good and the Raiders found themselves trailing once again 21-14.

However, in the waning seconds of the first half, Ledger dumped a pass off to Collins, who scampered 48 yards down to the VWS 18-yard line. With one second left, Johnson had a chance to bring SAR to within four points, but his 39-yard field goal attempt sailed wide right and the Raiders would go into the locker room at halftime, trailing 21-14.

In the third quarter, the Raiders were able to move the ball all the way down inside the VWS 1-yard line.   However, SAR was forced into a fourth and goal situation and could not get the ball over the goal line. As a result, the ball was turned over on downs to the Valiants. Unfortunately for the Raiders, their inability to score at this juncture proved to be a critical factor in the outcome of the game.

Once VWS got the ball back on downs at their own one-yard line, they quickly took advantage by moving the football. Pettigrew made a run from scrimmage that went all the way down to the SAR 30-yard line. A few plays later, Pettigrew, who is going to North Carolina State on a wresting scholarship, finished off the drive with his third rushing touchdown of the night from one yard out. Ean Henry’s extra point was good and the Raiders found themselves in a hole, trailing 28-14 with a little less than 12 minutes left in the game.

Trailing by two scores, the Raiders needed a big play to get themselves back in the game and they got it on third and 13 when Ledger threw a short pass to Collins, who broke a tackle and scampered all the way down to the VWS 14-yard line. However, the Raiders were flagged with a delay of game penalty and Ledger was sacked for a loss on the following play. 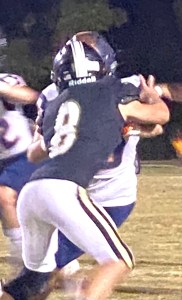 In spite of those setbacks, SAR would find a way to come through. On third and 25 from the VWS 27, Ledger found Cedric Smith over the middle for a 16-yard gain. Then on fourth and nine from the VWS 11, Ledger threw a fade to Buddy Brady in the end zone for an SAR touchdown. The extra point by Johnson was good and SAR was back in the game, trailing 28-21 with a little over eight minutes left.

With a seven-point lead, the Valiants were content to use their running attack that had worked for them all night. They used the running attack of Pettigrew to eat up as much clock as possible and were able to move the ball close to midfield.  However, on second down and six from the VWS 44, SAR senior linebacker Greer Hagerson was able to make a play for no gain, forcing a third and six situation for the Valiants. VWS was able to get first down yardage on the next play, but the Raider defense limited the Valiants on their next two plays, forcing a third and seven situation from the SAR 45. However, on third down and seven, Pettigrew ran the ball around the right side for a 15-yard gain and a first down. On the very next play, Pettigrew rushed for 25 yards down to the SAR 5-yard line and would eventually score his fourth touchdown of the night on second and goal from the 1-yard line. The extra point by Ean Henry was good and the Raiders were staring at 1:54 left in their season, as they trailed 35-21.

On their next possession, the Raiders tried to mount a quick scoring drive, but on fourth and 10 from the SAR 38, Ledger’s pass was complete to Cedric Smith, but Smith failed to gain the necessary yardage and the ball was turned over on downs to VWS. Womack simply took a couple of knees and the Raiders’ season came to an end with a 35-21 loss to the Valiants.

VWS (3-8) will move on to the second round of the GISA Class AAA State Playoffs and will face Pinewood Christian Academy in Bellville, GA on Friday, November 19.

Though the football season is over for the Raiders, many of these fine athletes will move on to represent Southland Academy for the remainder of the 2021-22 school year in other sports, such as basketball, wrestling, baseball and track.