SGTC Jets and Lady Jets both ranked nationally by NJCAA 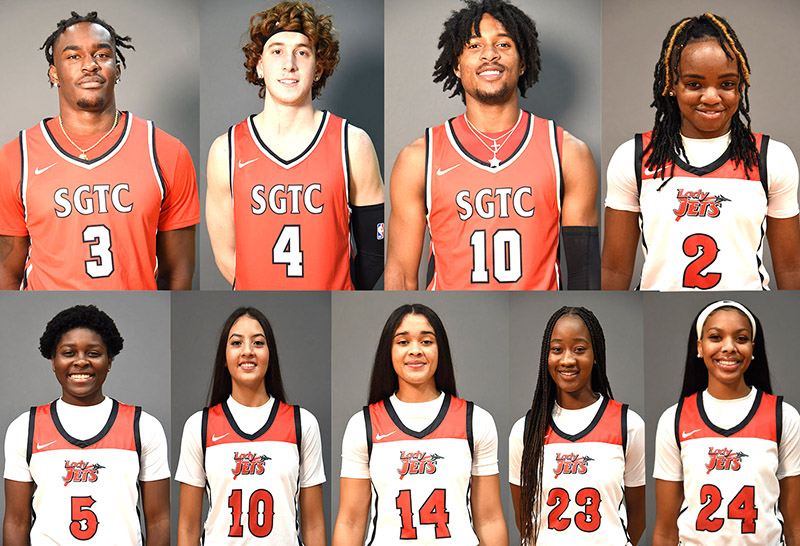 Shown above on the top row are the SGTC Jets and Lady Jets sophomores who earned individual recognition this week in the NJCAA rankings. Shown (l to r) are Jalen Reynolds (3), Will Johnston (4), Marvin McGhee, III, (10), and Maikya Simmons (2). On the bottom row are freshmen, Alexia Dizeko (5), Susan Posada Yepes (10), Laurie Calixte (14), Fanta Gassama (23), and Camryn James (24). Photo by SGTC

AMERICUS – The South Georgia Technical College Lady Jets moved up two spots into 5th place in the National Junior College Athletic Association (NJCAA) Division I women’s national basketball poll this week and the Jets earned their first national ranking in several years with a 21st place seed in the Division I men’s basketball poll.  Both teams are currently unbeaten in the 2021 – 2022 season.

“This is exciting news for both teams,” said SGTC Athletic Director and Lady Jets head coach James Frey.  “We are honored that we have been able to move up each week in the polls, but we have a real test on Tuesday when we host the now 14th ranked Georgia Highlands Lady Chargers in our gym at 5:30 p.m.  This will be a real battle and I have the upmost respect for SGTC former Lady Jets head coach Brandon Harrell and his Georgia Highlands team.  He has a lot of great talent and we are going to have to play hard to win.”

Coach Frey is also very excited for new Jets head coach Chris Ballauer and assistant coach Jaren Harris and the 2021 – 2022 Jets for their ability to move to 5 – 0 on the season and break into the NJCAA national rankings after only two weeks of play.  The Jets knocked off the seventh ranked Shelton State team earlier this week and took three consecutive wins on the road to earn their 21st spot.

In addition to the overall team rankings, several Jets and Lady Jets were also highlighted for their individual efforts.  Sophomores Jalen Reynolds, Will Johnston, and Marvin McGhee, III, were the three Jets spotlighted for their efforts on the court and then six Lady Jets earned individual recognition.  The Lady Jets singled out included:  sophomore Maikya Simmons, along with freshmen, Alexia Dizeko, Fanta Gassama, Camryn Jones, Susana Posada Yepes, and Laurie Calixte.

Susana Posada Yepes, a freshman forward from Columbia, was ranked 20th in three-point shooting hitting 55.6% and her teammate Laurie Calixte, a freshman from Canada was 31st in that category with a 50% success rate from the three point line.

Sophomores Will Johnston, a point guard from Australia, and Marvin McGhee, III, a guard from Atlanta, Georgia are both garnering attention on the court.  McGhee is currently 11th overall in total points with 120 and Johnston is listed at 29th with 105.  The two are also tied for 41st in steals per game with 2.8 each.  McGhee was recognized for averaging 24 points per game this season after five games which is 10th in the nation and Johnston is 29th with an average of 21 points per outing.  Johnston also earned a 17th national ranking in assists per game with an average of 6.2.

The Lady Jets are at home against the national ranked Georgia Highlands Chargers on Tuesday, November 16th at 5:30 p.m. and then the Jets play Action Sport Academy at 2 p.m. in Americus on Saturday, November 20th.