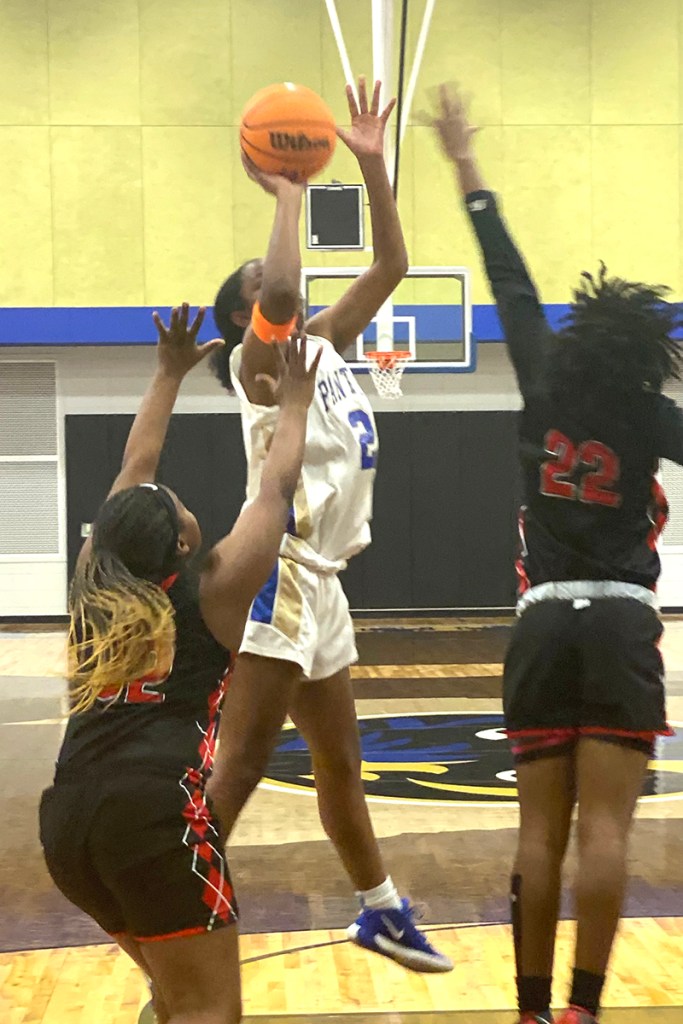 AMERICUS – On Friday evening, November 19; a new era began in Sumter County High School basketball.  Not only were the Panthers and Lady Panthers competing under a new school name for the first time since the early 2000s, they were also competing in a new “den”.  Unlike the old Panther Den on Harold Avenue, this new, spacious and beautiful gymnasium, known as the Pit, would play host to the season openers of both squads on this night.  The Lady Panthers, having enjoyed much success over the past few years, were hoping to get their season started off right in their new digs against Lee County (LCHS).  However, they struggled to score the basketball and committed several turnovers throughout the game.  As a result, the Lady Trojans were able to take advantage and defeated the Lady Panthers 54-41 in their season opener.
“We’ve just got to get better,” SCHS Head Coach Sherri Harris said.  “We’ve got juniors and seniors and they’re really going to have to make some plays in order for us to be competitive this year, but we’ll be ok. It’s only one game.  We played a pretty good team and a team we’re very familiar with. We play each other all summer and fall ball, you know, year round. We got the short end of the stick today. We’ll be back.”

SCHS senior forward Trinity Jackson led the Lady Panthers in scoring with 14 points and senior point guard Tiffani Goodman scored nine, with seven of those points coming from the foul line.  Freshman D’Eria Clark scored eight points and freshman Madison Shelton chipped in six for SCHS in the losing cause.

LCHS jumped out to a 9-2 lead to start the game, but the Lady Panthers responded with a 6-0 run that was capped off with a three-pointer by Clark. Clark was fouled on the three-point shot and made the free throw to bring SCHS to within one at 9-8. However, during the remaining minutes of the first quarter, both teams went cold from the field and LCHS would have a 12-10 lead by the quarter’s end. 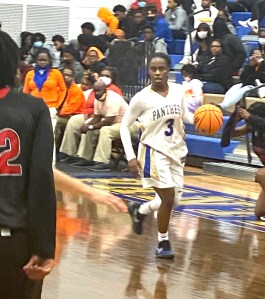 Over the first three minutes of the second quarter, both teams were still struggling offensively, but over the next few minutes, the Lady Trojans outscored SCHS 8-6 and took a 20-16 lead with a little less than three minutes left before halftime.

Jackson was able to score on a layup to get SCHS to within three.

However, the Lady Trojans responded with a three-pointer from Cayla Boyd with less than a minute before halftime and the Lady Panthers went into the locker room at the half trailing 27-21.

Over the first two minutes of the third quarter, things did not improve for SCHS. The Lady Trojans went on a 9-2 run to take a 36-23 lead by the five-minute mark.

Then with 3:57 to go in the third, Jamyria Maddox scored on a layup for LCHS, giving the Lady Trojans a 38-23 lead and prompting Harris to call a time out to try and jump-start her club.

With 2:43 to go, the Lady Panthers finally broke a lengthy scoring drought when Goodman made one of two foul shots. That was the beginning of an 11-0 run by SCHS and most of the scoring was done by Goodman’s 8-13 free throw shooting.

However, that would be as close as the Lady Panthers would get. For the remainder of the game, the Lady Trojans would outscore SCHS 16-7. While the Lady Panthers tried to make a comeback, they struggled to score and kept turning the ball over.

As a result, SCHS ended up losing its season opener to the Lady Trojans 54-41.

Maddox led LCHS in scoring with 15 points and Erica Irby scored 12 in the winning cause.