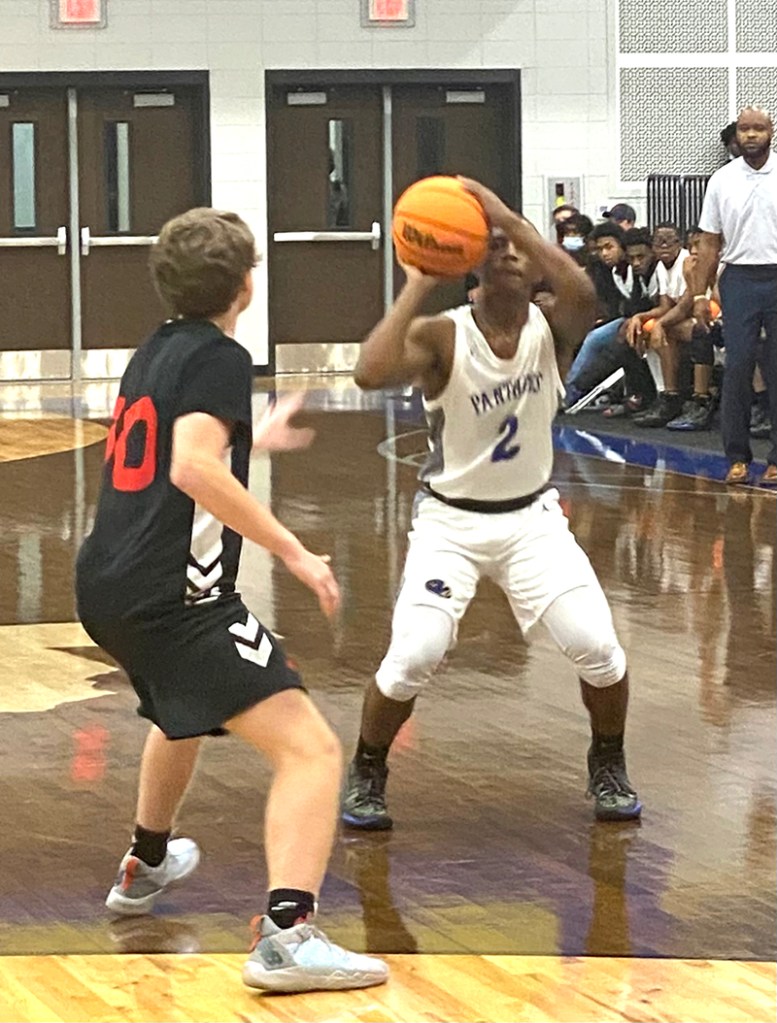 Sumter County junior guard D.J. Hurley is about to shoot and make one of his two three-pointers on the night. Hurley led the Panthers in scoring with 11 points in the win over Lee County. Photo by Ken Gustafson

AMERICUS – The Sumter County High School boys basketball team (SCHS) got the 2021-22 season off on a positive note with a 55-32 victory over Lee County in its season opener at the new SCHS gymnasium known as “The Pit.”

SCHS got off to a slow start in the first quarter, but the Panthers turned up their pressure defense, forced turnovers and jumped out to a 17-11 lead in the second quarter. From that point on, SCHS dominated the Trojans, as the Panthers were able to score by using dribble penetration and outside shooting.

“My guys came out in the first quarter kind of nervous. We weren’t playing as a team,” SCHS Head Coach Johnny Genwright said.  “So after the first quarter, I talked to them. We had a talk and I told them, ‘Everybody just move the basketball, penetrate and everybody will be able to score.’  They listened. They settled down. They started attacking the basket, playing defense, talking and we played as a team.  I told them that that is what it’s going to take for us to play as a team.”

Three Panthers scored in double figures in this game. D.J. Hurley led SCHS with 11 points and both Kyric Davis and Devon Dowdell each had 10.  Cameron Evans scored eight points and La’Travis Angry chipped in six points in the winning cause.

The Panthers got off to a slow start and trailed 11-7 in the first quarter. However, SCHS was able to use its pressure defense to create turnovers and scored points off those turnovers, which is a traditional trademark of recent Sumter County teams. Kyric Davis scored back-to-back transition baskets and keyed a 10-0 run to give SCHS a 17-11 lead. A couple of minutes later, the Panthers took a 25-15 lead on back-to-back three-pointers by D.J. Hurley and Anthony Tyson. The Trojans would score before the end of the first half, but the momentum had turned in favor of the Panthers, as they led at halftime 25-17.

Both teams were cold offensively during the first couple of minutes of the third quarter until Dowdell nailed a three-pointer to give SCHS a 30-17 lead. This sparked another run by the Panthers, as they outscored LCHS 8-5 over the next few minutes to take a 38-22 lead, prompting LCHS Head Coach Kirvin Davis to call a timeout. 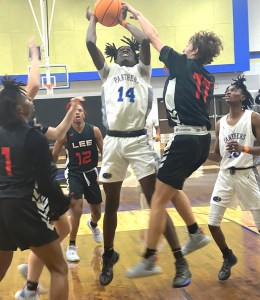 Sumter County’s La’Travis Angry grabs an offensive rebound and gets fouled on the play. Angry scored 10 points in the Panthers’ win over the Trojans.
Photo by Ken Gustafson

However, that timeout only paused the onslaught as the Panthers continued to limit the Trojans’ offense and continued to score via dribble penetration. By the 6:08 mark of the fourth quarter, SCHS had a 44-25 lead.

During the remainder of the fourth quarter, the Panthers continued to do what they had been doing in the second half: playing tenaciously on the defensive end, forcing turnovers and taking the ball to the basket. As a result, SCHS opened its season in the Pitt with a 55-32 victory. 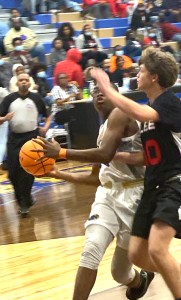 Braylon Chaney led the 0-3 Trojans with seven points and both Christian Brown and Christopher Robinson each chipped in six points in the losing cause.

The Panthers (1-0) will be off until they hit the hardwood on Wednesday, December 1, when they travel up to Macon to take on their first Region 2-AAA opponent: the Chargers of Central (Macon). Tip off is scheduled for 7:30 p.m.