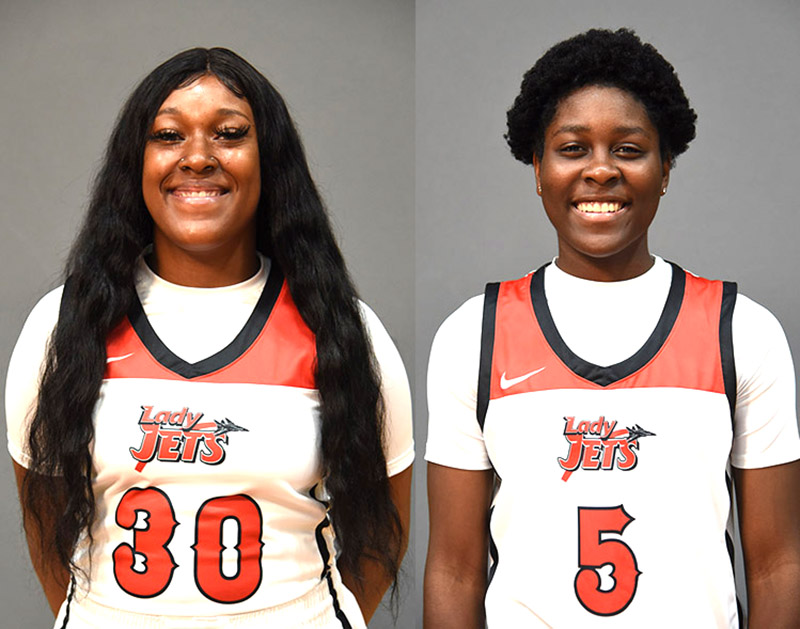 Kamya Hollingshed (30) and Alexia Dizeko (5) were the top scorers over the weekend for the Lady Jets. Photo by Su Ann Bird

TALLAHASSEE, FL – The South Georgia Technical College Lady Jets traveled to the Tallahassee Community College Classic over the weekend and ended up splitting decisions.  The Lady Jets came up with a 58-47 win over Monroe College from New York on Saturday, November 20, but 36 turnovers left them one point shy in a 60-59 loss to Tallahassee Community College on Sunday.  The Lady Jets dropped to 5-2 on the season.  Their first loss came earlier in the week to Georgia Highlands.

“We averaged 28 turnovers a game last week and went 1 – 2,” SGTC head coach James Frey said.   Frey’s team had climbed as high as #5 nationally in the National Junior College Athletic Association (NJCAA) polls.  “We are very lucky to have won the game we did against Monroe College. We have 36 turnovers on Sunday.  In 31 years of coaching, I’ve never coached a team that had 30 turnovers in a game. This is all about a lack of discipline and accountability.  We literally throw the ball to the other team.  Somehow on Sunday, we were still winning by one with 5.1 seconds left and allowed them to dribble the length of the court and lay the ball up and beat us.  We’re inventing ways to lose at this point and if we don’t change our mindset and toughness, we in for a long, long year,” Frey continued.

The Lady Jets went into the week undefeated with a 4 – 0 record and ranked fifth in the nation.  A poor performance against a very good 14th ranked Georgia Highlands team in a conference match-up Tuesday night handed the Lady Jets a 65 – 54 conference loss.  They bounced back on Saturday to pull a 58 – 47 win over Monroe College but fell 60 – 59 to Tallahassee Community College on Sunday.

The Lady Jets started out slow against Monroe and were down 12 – 11 at the end of the first half.  They came back in the second half and outscored Monroe 22 – 13 to go into the half up 33 – 25.  Both teams struggled in the third and fourth quarters, but despite 20 turnovers, and 30 personal fouls were able to capture the 58 – 47 win.

The Lady Jets only hit 35.7% from the field, 32.1% from the three-point line and 56.3% from the foul line against Monroe.  Sophomore Kamya Hollingshed was the bright spot in that game with 27 points.  She was eight of 16 from the three-point line and pulled down five rebounds, two assists and one steal.  The only other Lady Jet in double-figures was freshman Alexia Dizeko with 10 points, six rebounds, five assists and three steals.

Sophomore Maikya Simmons was the only other starter who scored.  She had two points, two rebounds, and four assists.   Laurie Calixte came off the bench to add five points and then Susana Posada Yepes and Loes Rozing both accounted for four points.  Majomary Ubi and Tena Ikidi closed out the scoring with two points and one point respectively.

On Sunday, the Lady Jets jumped out to an 18 – 9 lead at the end of the first half over Tallahassee.  They were still up 29 – 22 at the half.  Tallahassee Community College outscored the Lady Jets 19 – 14 in the third quarter and 19 – 16 in the fourth quarter to take the last second one-point victory.

Freshman shooting forward Alexia Dizeko from Switzerland led the Lady Jets in scoring with 24 points.  She was 10 of 13 from the field and four of four from the foul line.  She had seven rebounds, one assist, and two steals but had five turnovers and fouled out.  Kamya Hollingshed was the only other Lady Jet in double-figures.  She had 11 points but only hit two of 12 from the field, one of seven from the three-point line and was six of six from the foul line.  She had five rebounds, two assists and one steal but seven turnovers.

Freshman forward Fanta Gassama scored nine points for the Lady Jets and was the leading rebounder with 14.  Sophomore point guard Maikya Simmons tossed in five points, Camryn James had four, and Luana Leite and Susana Posada Yepes closed out the scoring with three points each.  The Lady Jets shot 39.6% from the floor, 20% from the three-point line and 62.5% from the free throw line.

“Leadership is something we’ve always had,” said Coach Frey.  “Players stepped up when things were going in the wrong direction and they helped us as coaches correct things.  We have absolutely no leadership at this point on this team and that’s disappointing.  We got two or three that absolutely should be leaders and aren’t and a few others that are capable.  We need to do some soul searching and decide what we want from this season starting today.  As a coach, I’ve done that the past 12 hours and we’re going to work as hard as we can to find seven or eight who will buy in and do things the right way and we will roll with those seven or eight.”

The Lady Jets are 5 – 2 overall and 1 – 1 in the Georgia Collegiate Athletic Association.  They will return to the court at home on Friday, November 26th and Saturday, Nov. 27th as the hosts of the Pete Arrington Thanksgiving Classic.

The tournament will kick off on Friday, November 26th at 4 p.m. with Albany Tech taking on Daytona State.  The Lady Jets will follow at 6 p.m. in a match-up against Motlow State coached by former SGTC Lady Jets assistant Coach Kezie Conyers.  On Saturday, November 27th the games will kick off at 12 noon with Albany Tech and Motlow State and then at 2 p.m., the Lady Jets will host Daytona State.

On Wednesday, December 1st, the Lady Jets travel to Albany for a conference game against Albany Tech at 5:30 p.m.  They will host Chattahoochee Valley Community College on Saturday, December 4th at 1 p.m.  The Jets are on the road that week.  They will play in the Chipola Classic in Marianna, FL on December 3rd and 4th.  They take on Gulf Coast at 3 p.m. CST December 3rd, and then 5th ranked Chipola College at 3 p.m. CST on December 4th.  They continue the Florida match-ups with a trip to Panama City, FL on December 9th and 10th to the Gulf Coast Classic.