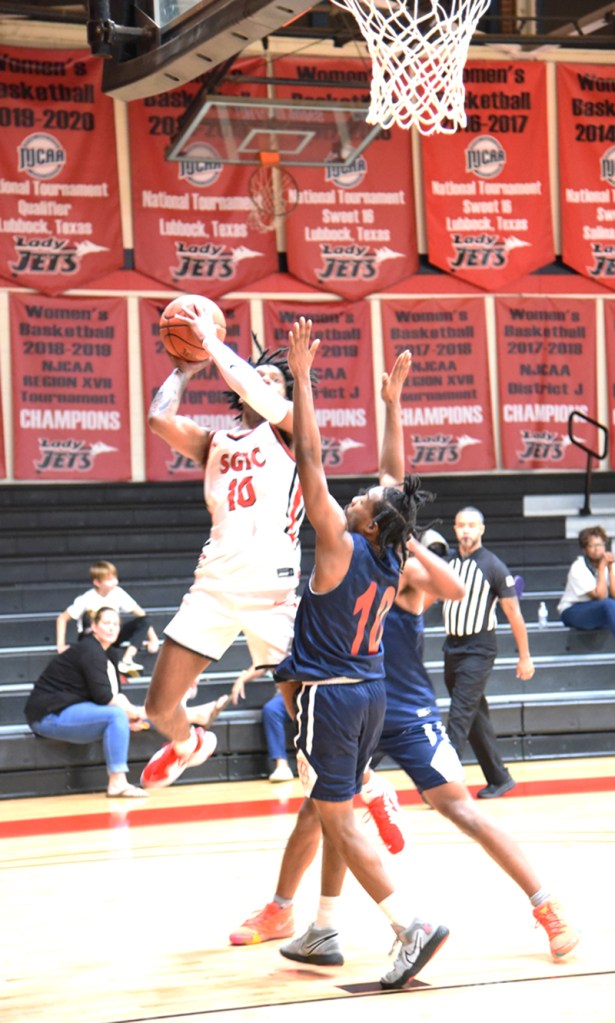 Marvin McGhee, III, (10) was the leading scorer for the Jets in the win over Action Sports Academy. Photo by Su Ann Bird

AMERICUS – The 21st nationally ranked South Georgia Technical College Jets coasted to a 123 – 41 win over Action Sports Academy in The Hangar Saturday to move to 6 – 0 on the season.  The Jets will now travel to Sarasota, FL for the State College of Florida Classic where they will face State College of Florida and nationally ranked Eastern Florida State and Indian River Community College on November 25th, 26th, and 27th.

Action Sports was not sure what hit them when the Jets took to the floor.  The Jets scored first and never looked back.  SGTC was up 74 – 15 at the end of the first half and three Jets were already in double-figures.

Sophomore guard Marvin McGhee III from Atlanta led the Jets on the night with 33 points, six rebounds, eight assists and four steals.  He had 28 points at the end of the first half.  He was five of six from the three-point line and 13 of 16 from the field.  Sophomore point guard Will Johnston from Sydney, Australia, had 24 points on the night, four rebounds, four assists and three steals.  He had 10 points in the first half.

Sophomore guard Justice Hayes scored 17 points and had four assists and a steal.  He was followed by sophomore forward Jalen Reynolds who had 15 points and 10 rebounds and a blocked shot.  They were joined freshman Bryce Turner who had 12 points and sophomore Matija Milivojevic who tossed in 11 points.  Nathan Wilson and Malik Battle closed out the scoring with 6 and 5 points respectively.