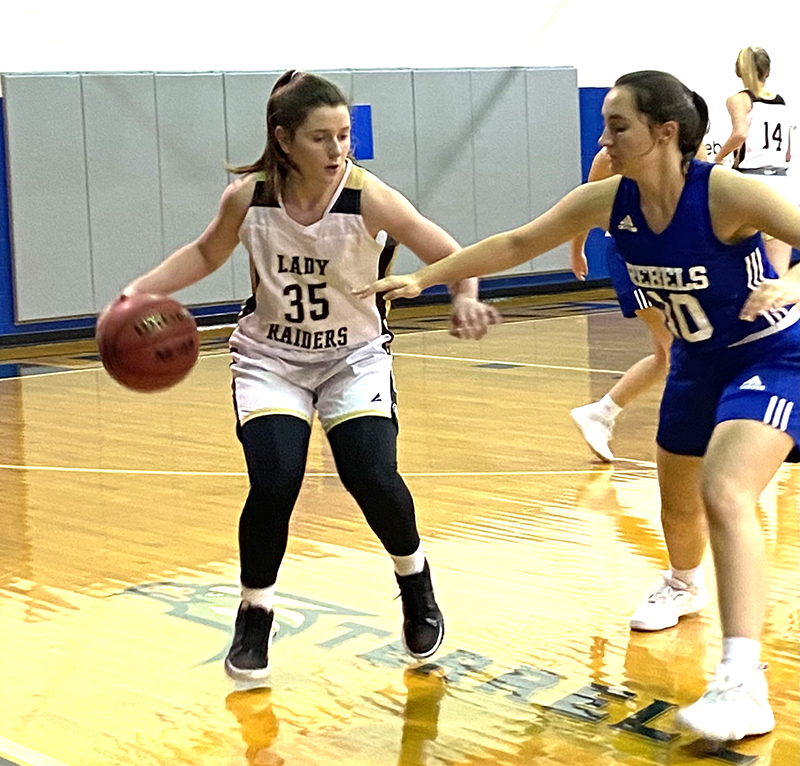 Southland Academy junior guard Riley Mitchell (#35) scored 30 points to lead the Lady Raiders to a 61-36 victory over Chambers Academy (AL) in their season opener at the Terrell Tip-Off Tournament at Terrell Academy on Monday, November 22. Photo by Ken Gustafson

DAWSON, GA – The defending GISA Class AAA state champion Southland Academy Lady Raider basketball team (SAR) got the 2021-22 season off to a great start when they traveled over to Dawson, GA and defeated the Lady Rebels of Chambers Academy (CA) by the score of 61-36 on Monday, November 22, in the first of their two games of the Terrell Tip-Off Tournament at Terrell Academy in SAR first-year head coach Eric Israel’s debut.

This was a game in which the Lady Raiders started off slow in the first quarter, but stepped up their defensive pressure and played solid, tenacious defense throughout the rest of the game. As a result, SAR forced the visitors from La Fayette, AL into committing numerous turnovers and scored off many of those turnovers. They also did a better job in the second half of blocking out, which resulted in numerous points in the paint for the Lady Raiders. 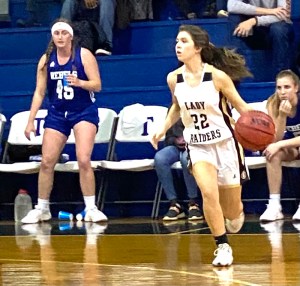 SAR junior guard Julia Caroline Bailey (#22) handles the ball for the Lady Raiders. Bailey knocked down a three-pointer in the Lady Raiders’ win over Chambers Academy.
Photo by Ken Gustafson

SAR junior guard Riley Mitchell put on a show in this game. She led all scorers with 30 points and knocked down eight of 12 foul shots. Junior guard Morgan Weaver scored 12 points and sophomore guard Mary Beth Easterlin chipped in eight in the winning cause.

For the remainder of the first half, both teams played a run and gun style of basketball and both teams used their defensive pressure to create scoring opportunities. However, with the score tied at 15-15, SAR went on a 5-0 run that was capped off with a three-pointer by Julia Caroline Bailey. CA responded with a 7-2 run of its own to tie the game at 22-22 and with 57.3 seconds left before halftime, McKenzie Gilliland gave the Lady Rebels a one-point lead when she made one of two foul shots. However, Riley Mitchell responded by knocking down two free throws with 11.2 seconds left to give the Lady Raiders a 24-23 halftime lead. 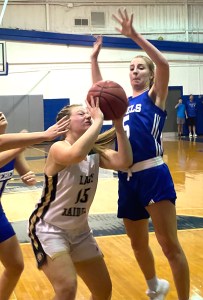 In the second half, the Lady Raiders did exactly what Israel and his coaching staff talked about at halftime. By stepping up their defense and blocking out, they outscored CA 9-3 over the first two minutes of the third quarter and capped off that run when Mitchell drove to the basket and scored. Mitchell would later score again on dribble penetration, get fouled and sink the foul shot for the three-point play to give SAR a 36-28 lead with under four minutes left in the third. That sequence of events proved to be a major turning point in the game.

Then with 2:25 to go in the third, Mitchell struck again by grabbing an offensive rebound, scoring on the inside and completing the three-point play by making the free throw after getting fouled.

From this point until the final horn, SAR took total control of the game. The Lady Raiders forced numerous turnovers and scored on several transition baskets. As a result, SAR would go on to salt away the 61-36 victory.

McKenzie Gilliland led the Lady Rebels in scoring with nine points and Claire Allen scored eight. Though the Lady Rebels tried to match the intensity of SAR, they struggled throughout the game to hit shots and were outrebounded by the Lady Raiders in the second half, which proved to be a factor in the outcome of the game.

The Lady Raiders (1-0) will return to Terrell Academy on Tuesday afternoon, November 23, to take on Piedmont Academy at 2 p.m.