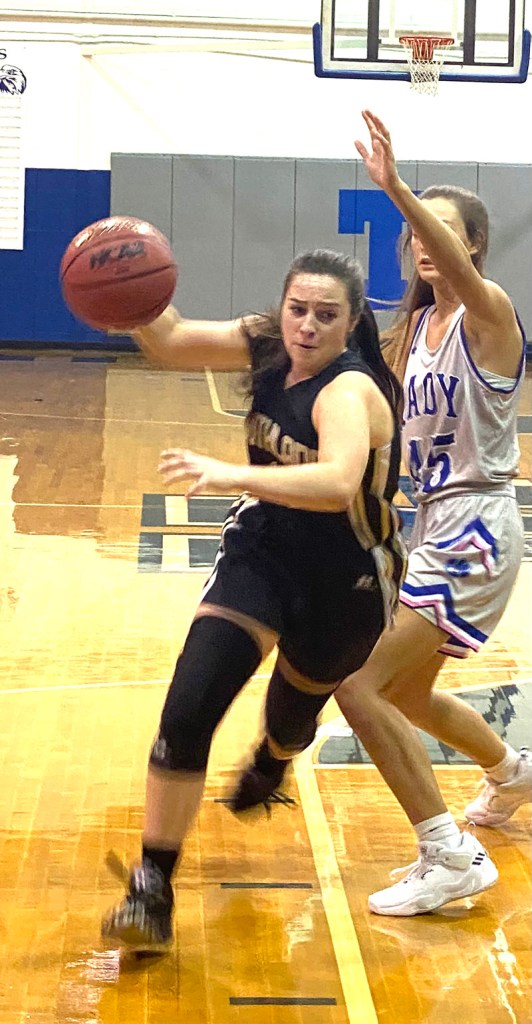 DAWSON, GA – The Southland Academy Lady Raider basketball team (SAR) went toe to toe with a strong Piedmont Academy squad. However, in spite of their effort, the Lady Raiders struggled to stop PA sharp shooter Marissa Holder, who scored a total of 22 points and drilled five three-pointers. Things got more difficult for SAR when high-scoring junior point guard Riley Mitchell suffered an injury in the third quarter and could not return. As a result of these two factors, among others, the Lady Raiders fell to PA 50-44 on Tuesday, November 23 in their second game of the Terrell Tip-Off Tournament at Terrell Academy.

In spite of the loss and the adversity with Mitchell going down, SAR Head Coach Eric Israel was extremely pleased with his club’s effort and performance in this game.

“I’m super proud of our girls for the way we battled today,” Israel said. “There were a couple of times we could have folded the tent, but we kept battling. We hung in there. Piedmont just made some really difficult shots from way behind the three-point line and you just have to tip your hat to them. They played a great game.”

Morgan Weaver led the Lady Raiders in scoring with 18 points and Mitchell scored all of her16 points in the first half before she was injured while fighting for a loose ball in the third quarter. Mary Beth Easterlin scored four points, Julia Caroline Bailey scored three on a three-pointer, Emma Kate Hayes had two points and Ansley Weldon sank one free throw to round out the SAR scoring. 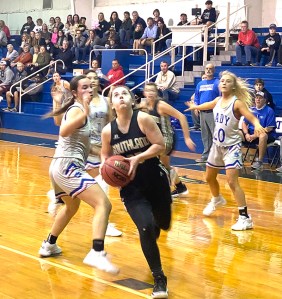 Southland Academy junior guard Riley Mitchell drives to the basket against Piedmont Academy. Mitchell scored 16 points in the first half before suffering an injury in the third quarter that forced her to leave the game.
Photo by Ken Gustafson

After an evenly-played first quarter, the score was tied at 12-12, but the Lady Cougars jumped out to a 17-14 lead in the second quarter on a three-pointer by Holder. This was the beginning of a 10-2 run by the Lady Cougars that didn’t end until Mitchell scored on a layup with less than two minutes before the half to make the score 27-18 PA. During this run by the Lady Cougars, SAR struggled shooting the ball and had some defensive breakdowns. However, the Lady Raiders scored four unanswered points over the final minute of the first half to cut PA’s lead to 27-22 at halftime.

With 5:34 to go in the third quarter, Mitchell suffered an injury while fighting with a PA player for a loose ball and had to be taken to the locker room for treatment. Unfortunately for SAR, Mitchell was not able to return and they would have to play without their best player for the remainder of the game. At this point of the game, SAR trailed 31-27.

Over the next couple of minutes, the Lady Cougars outscored SAR 5-1 to take a 36-28 lead, but Weaver was able to knock down two foul shots to keep the Lady Raiders within striking distance at 36-30.

However, PA went on another 5-0 run and capped it off with a basket by Teagan Satterfield, but SAR responded with a 6-0 run of its own to keep within striking distance and trailed 41-36 with one quarter to play.

Over the first four minutes of the fourth quarter, both teams struggled to score, though they both were playing hard defensively. However, Easterlin was able to score on the inside to bring SAR to within three at 43-40. 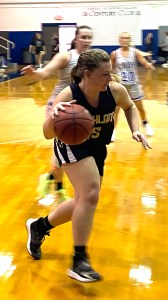 With close to two minutes remaining, the Lady Raiders were able to cut their deficit to 44-42, but PA responded with another three-pointer from Holder. From this point on, the Lady Cougars were able to hold on to their lead and went on to win 50-44.

In addition to Holder’s 22 points that led the Lady Cougars in scoring, Maddie Waddleton was in double figures with 13 points and Teagan Satterfield scored 11. Hannah Tyler had three points and Jacie Jenkins made one foul shot to round out the PA scoring.

After the Thanksgiving Break, SAR will hit the hardwood on Tuesday, November 30 when they travel up to Perry, GA to take on the Westfield Lady Hornets. Tip-off for that game is scheduled for 6:30 p.m.