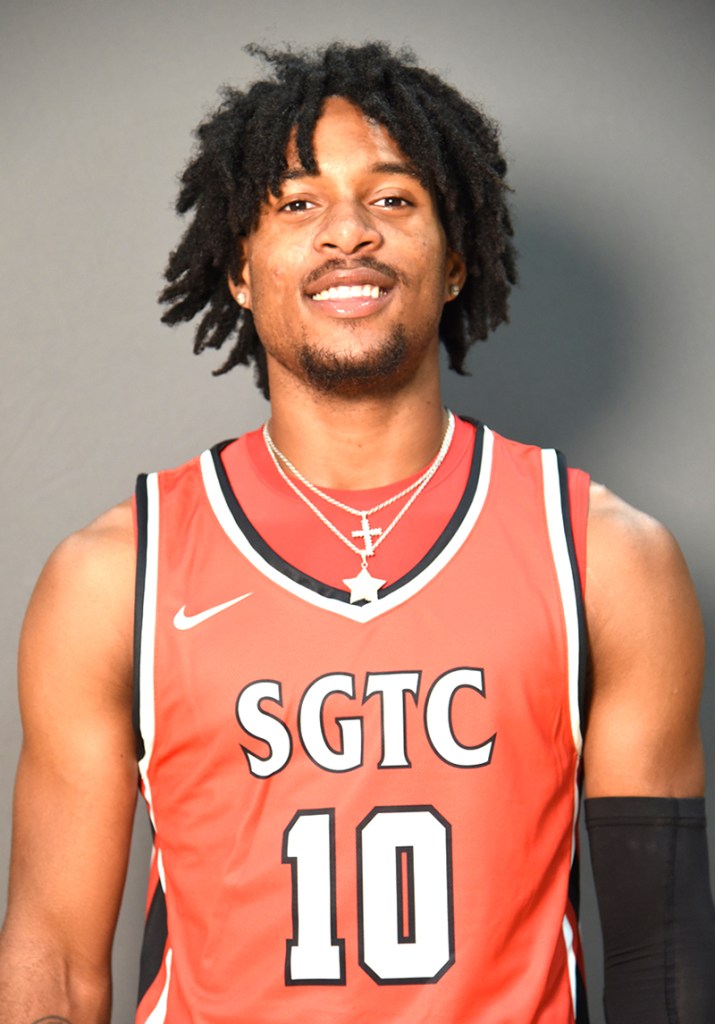 Marvin McGhee, III, (10) was the top scorer for the Jets in two of their three losses on the road in the State College of Florida tournament over the Thanksgiving Holidays. Photo by Su Ann Bird

“We did not play well,” SGTC Head Coach Chris Ballauer said.  “This was some very good competition, but I feel like we should have won the opening game against State College of Florida and that might have given us some confidence to win against Eastern Florida State and Indian River.”

The Jets had climbed to 17th in the National Junior College Athletic Association (NJCAA) national rankings prior to the three losses over the holidays.  The Jets are now 6 – 3 on the season and have more tough games on the road over the next two weeks as they travel back to Florida for the Chipola Classic on December 3rd and 4th to match up with 4th ranked Chipola College and Gulf Coast and then they will play in the Gulf Coast Classic on December 9th and 10th for a rematch with Gulf Coast and Florida Southwestern State College.

In the opening game against State College of Florida, the Jets were down by three points at the end of the first half, 54 – 51.  They were still down by three points with seconds remaining on the clock when sophomore Marvin McGhee, III, hit a three-point shot to tie the game at 89 – 89 at the buzzer and force the game into overtime.  State College of Florida outscored the Jets 14 – 9 in the five-minute overtime to take the 103 – 98 overtime decision.

McGhee, a sophomore guard from Atlanta, led the Jets in scoring two of their three games.  He had a total of 37 points in the narrow loss to State College of Florida.  Four other Jets joined him in double-figures in that match-up.  Sophomore point guard Will Johnston had 18 points, sophomore guard Malik Battle added 13 points and then Jalen Reynolds and Bryce Turner both added 11 points. Reynolds also pulled down 13 rebounds and Matija Milivojevic had 10 rebounds and four points.  Justice Hayes also contributed four points.

The Jets only shot 30% from the field, and 25.8% from the three-point line.  They were 19 of 27 from the foul line.  Marvin McGhee led the team in scoring in that contest again with 19 points.  Malik Battle was the only other Jet in double-figures and he came off the bench to account for 14 points.  Jalen Reynolds tossed in eight points and had 10 rebounds.  Justice Hayes accounted for eight points and then Nathan Wilson added five, Will Johnston 4, Bryce Turner 3, and Matija Milivojevic closed out the scoring with two points.

In the final game of the Thanksgiving holidays, Malik Battle came off the bench to lead the Jets with 22 points.  He was 8 of 12 from the field and 6 of 9 from the three-point line.  He was joined by four other Jets in double-figures in the narrow 92 – 84 loss.  Will Johnston had a total of 19 points, six assists and one steal.  Jalen Reynold had 14 points and nine rebounds while Marvin McGhee scored 11 points and Matija Milivojevic had 10.  Closing out the scoring for the Jets was Justice Hayes and Kallin Fonesca with three each and Bryce Turner with two points.