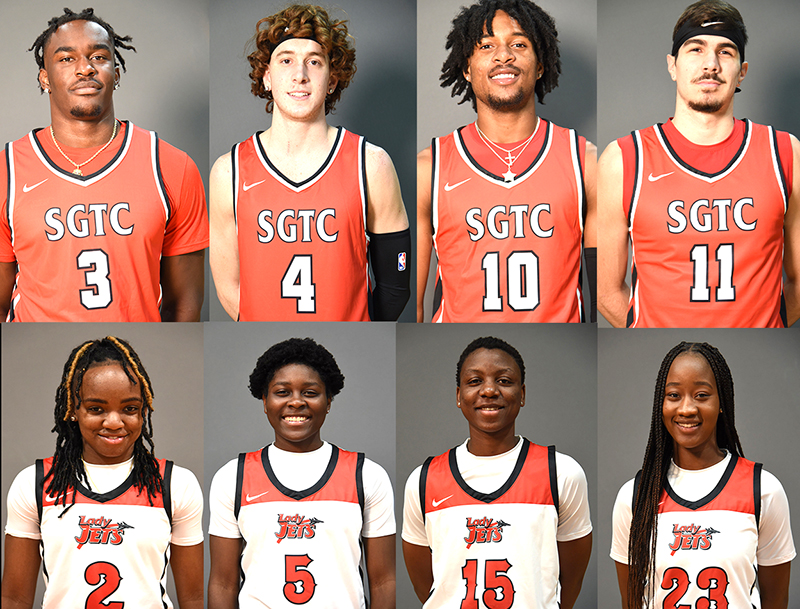 Shown above on the top row are the SGTC Jets and Lady Jets sophomores who earned individual recognition this week in the NJCAA rankings. Shown (l to r) on the top row are Jalen Reynolds (3), Will Johnston (4), Marvin McGhee, III, (10) and Matija Milivojevic (11). Maikya Simmons (2), Tena Ikidi (15), Alexia Dizeko (5), Fanta Gassama (23) are shown on the bottom row (l to r). Photo by Su Ann Bird

AMERICUS – Three losses in the State College of Florida Thanksgiving tournament in Sarasota, FL cost the South Georgia Technical College (SGTC) Jets a spot in the NJCAA Division I men’s rankings this week.  In addition to the Jets’ problems, the Lady Jets are also struggling, as they dropped from 15th to 21st place in the NJCAA women’s poll after losing to Daytona State College in the Pete Arrington Thanksgiving Classic in the Hangar in Americus.

The Lady Jets were ranked as high as fifth nationally after opening the season unbeaten, but two losses last week dropped them to 15th in the November 22nd poll and another loss over the Thanksgiving Holidays forced them into the 21st spot.

The Jets had climbed from no ranking to 21st and then moved up to 17th after opening the season with a 6 – 0 record.  However, the three losses to tough teams in Florida over the weekend dropped them out of the rankings but they did receive some votes.   Both teams are struggling right now are posting identical 6 – 3 records.

Even though both teams slid in the NJCAA overall team rankings, the Jets and the Lady Jets both had players highlighted for their individual efforts.  Jets Sophomores Jalen Reynolds, Will Johnston, Marvin McGhee, III, and Matija Milivojevic were the four Jets spotlighted for their efforts on the court and then three Lady Jets earned individual recognition.  The Lady Jets singled out were: sophomores Maikya Simmons and Tena Ikidi, along with freshmen, Alexia Dizeko, and Fanta Gassama.

Maikya Simmons, the sophomore point guard from Stafford, VA, is ranked 12th in assists per game with an average of 5.6.  Sophomore Tena Ikidi, the center from Nigeria, broke into the individual rankings this week in blocks per game. She is currently tied for 46th with an average of 1.3 per game.

Jets sophomore forward Jalen Reynolds from Darien, Georgia, earned individual rankings in four categories the NJCAA weekly stats.  He is currently ranked 14th in defensive rebounds per game with an average of 7.2.  He is 21st in rebounds per game an average of 10.1, 22nd in total rebounds with 91, and 38th in blocked shots with 1.9 per game.

Sophomores Will Johnston, a point guard from Australia, and Marvin McGhee, III, a guard from Atlanta, Georgia are both garnering attention on the court.  McGhee is currently 5th overall in points per game with an average of 24.4.  Will Johnston is behind in 40th place with an average of 18.9 per outing.  McGhee has scored a total of 220 points this season which is the 8th best in the NJCAA nationally and Johnston is 31th with 170 total points.

Johnston stood out in one more ranking.  He is currently 28th in the nation in assists per game.  He averages 5.6 assists each game.  The other Jet highlighted was sophomore guard/forward Matija Millivojevic from Serbia.  He broke into the individual rankings in three-point percentage shooting.  He is hitting 50% of his shots which put him at 40th nationally.

The Lady Jets will have a chance to improve on their 6 – 3 overall record as they travel to Albany to face Albany Tech on Wednesday, December 1st at 5:30 p.m. in a Georgia Collegiate Athletic Association (GCAA) game.  They will host Chattahoochee Valley Community College at home on Saturday, December 4th at 12 noon in the Hangar.  It was originally scheduled for 1 p.m.

The Jets will travel back to Florida this weekend from the Chipola Classic.  They matchup against Gulf Coast in Marianna, FL at 3 p.m. CST on Friday, December 3rd and then take on Chipola College on Saturday, December 4th at 3 p.m. CST.