The first time Amanda and I visited the shops in Plains was the same day South Carolina removed the Confederate flag from the state capitol grounds. We had been in Charleston weeks earlier when a white man murdered nine African American worshipers. Amanda worked with one of the victims at the College of Charleston library and, over the next year, helped curate an online memorial exhibit. I was in the library that evening, three blocks from the shooting. Walking home with a backpack past a sea of emergency lights, I knew neither what had happened nor that I vaguely matched the earliest description of the killer.

Those recent memories mattered in Plains that morning because the co-owner of a political memorabilia shop asked where we were from. “I’m visiting from South Carolina; he just moved here to work for the park service,” Amanda said. The co-owner replied, “it’s a mess what’s happening,” in a tone that left it unclear whether he meant the murders or the widespread removal of Confederate symbols. After a pause, he continued, “We don’t have race problems here. We may not like each other, but we respect each other.” We paid for our political buttons and left.

At the antique mall, one item for sale stood out. It was a metal reproduction of historical paper signs that once covered rural Georgia. Those signs, often put up by the candidate himself as he canvassed the state in his white Pontiac station wagon, stated: “This Is Maddox Country.”

Maddox Country? I thought I was in Carter-land.

Lester Maddox was a famous businessman, an infamous segregationist, and the punchline in Randy Newman’s song, “Rednecks” (1974). Coming of age during the Great Depression, Maddox worked a series of manufacturing jobs before opening the Pickrick Cafeteria (“you PICK it out…we’ll RICK it up”) near Georgia Tech in Atlanta. Maddox operated the Pickrick from 1947 until he closed the business to avoid serving African Americans under the Civil Rights Act of 1964.

While Maddox had a tense relationship with the press, newspaper ads and, later, reporting on his erratic and violent standoffs propelled his political rise. The “Pickrick says” advertisements drummed up business and gave Maddox a political forum. “Shall we keep our schools segregated, our races pure, peace and harmony in our schools and our state, and protect our children as our forefathers fought for us,” one ad in 1958 asked, “or shall we give it all up, throw our children to the wolves (politicians) and let those who are most dear to us come face to face with the diseases, crime and wickedness that has come to all large integrated cities?” Both loved and despised, the ads were some of the most-read parts of the Atlanta Constitution.

Maddox became a familiar face in Georgia politics during the civil rights era. He lost Atlanta mayoral races in 1957 and 1961 and a runoff for the Democratic nomination for Lieutenant Governor in 1962. Yet the arch-segregationist’s political viability increased alongside civil rights marches in Georgia, including Americus. In 1965, shortly after the murder of a 21-year-old man named Andrew Whatley in the city, Maddox came to town to address his supporters. 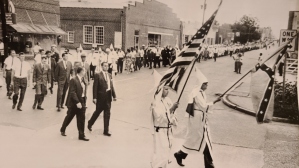 The speech at the fairgrounds was the “classic” Lester Maddox who wallowed in victimization and spewed vitriol on the media, the federal government, integrationists, and communists. He told the crowd that he heard the Tifton radio announcer say that segregationists had “imported Lester Maddox to Americus.” His response echoed the “Maddox Country” message on his signs. “No one imported me down here, I belong here. I belong in Georgia,” he said. “You haven’t heard the same news people say that they’ve imported the communists, have you? And they won’t do it.”

Maddox embraced his label as a segregationist. “I’m proud to be called a segregationist,” he told Americus listeners, and then challenged the media to apply the word “integrationists” to his political opponents. “That’s what they are,” he insisted, “every one of them.” Turning to Whatley’s death, Maddox placed blame on President Lyndon Johnson, Atlanta Constitution editor Ralph McGill, and “the communists.” The next week Maddox spoke in front of the Sumter County courthouse. On that tense weekend, 600 Klansmen marched from the courthouse to the site of Whatley’s death on a loop through the city. Maddox’s speech was a key part of the demonstrations.

Gov. Maddox at the College

Maddox’s success in the 1966 gubernatorial campaign made critics pause and reassess the new governor. Some believed they saw a “new” Lester Maddox after the candidate survived a bizarre election that ended when the Georgia legislature—not a majority of voters—made Maddox governor. The Maddox administration, with important exceptions, was not as bad as his early biographers feared. He supported prison reform, integrated the state patrol, appointed more African Americans to government positions than previous governors, and increased funding for higher education. “He was nuts, but he was a pretty good governor,” a retired state senator who knew Maddox told me. “He left something to be desired in social skills.”

In other ways, though, Maddox remained the paranoid Pickrick from his newspaper ads. During the funeral procession for Martin Luther King Jr., Maddox surrounded the state capitol with police and gave orders to open fire if protestors broke windows. “Shoot them down and stack them up,” the governor said.

Georgia Southwestern College grew from a two-year college to a four-year, degree-granting institution in those turbulent years. Governor Maddox visited Americus to dedicate so many new buildings in May 1967 that no one seemed sure which buildings were on the program. The governor’s official speech referred to four buildings; the Americus Times-Recorder identified six new buildings and two additions. The new buildings that still stand include the Marshall Student Center, the science building, and the gymnasium. 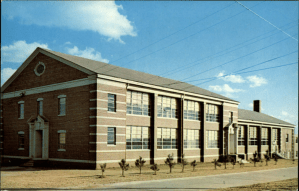 Maddox’s speech in the Jackson Hall auditorium was innocuous by the standard set two years earlier. It was the sort of speech that let people ask if the weight of the office had changed Maddox. “Availability of a college education for every Georgia student who has the desire and the ability to achieve it is our fervent hope,” said the governor who had dropped out of high school. “With a Governor who knows the frustration of wanting an education and being denied one, I am certain that you agree with my desire to remove any barriers between a Georgia boy and girl capable of obtaining a college degree, but without means to seek one.”

The governor took credit for new buildings and the expansion of the University System of Georgia, even though those decisions happened under a previous administration. But there was no talk of federal-state clashes, communists, or segregation—at least according to his official prepared remarks. Two years earlier, GSW complied with federal law and became nominally integrated with the admission of Gloria Wise. Two year later, Theresa Mansfield became the first African American alumnae.

One of the listeners in Jackson Hall that day was a former state senator nine years younger than Maddox. In many ways it would have been more appropriate for this man to dedicate the GSW buildings. He had campaigned on education and, during his time as senator, helped make Georgia Southwestern a four-year college. Running for governor in 1966, this state senator lost to Maddox in the Democratic primary. Lester Maddox thanked many people that day, but he did not thank former state senator Jimmy Carter.

Unlike Maddox, Carter was never a segregationist, but historians have pointed out that he adapted his 1970 gubernatorial campaign to appeal to Maddox’s supporters. Years later, President Carter said that he had no regrets from this campaign. While he would have liked to have said he didn’t want to be associated with people like Lester Maddox, the fact was that he needed their votes. Once in office, though, Carter made a public shift away from Maddox and his admirers. To their dismay, Governor Carter said in his inaugural address that “the time for racial discrimination is over.”

This was both Maddox Country and Carter-land. It is also a place where men and women, black and white, have struggled for generations to improve their lives and those of their children. There was more at stake than space on telephone poles and symbolic ownership claims on signs. Survival, human dignity, and the ability to participate in the shaping of a country’s future hung in the balance. The fairgrounds, the courthouse, the streets, and Georgia Southwestern were all contested spaces.

Remembering is selective. Forgetting is too. President Carter’s rise to the presidency is heavily memorialized. The local connections to Maddox and white supremacy are left in the shadows of our collective living memory. It will take seeing history as more than a commodity to be sold, a brand in need of protection, or a weapon for partisan politics to fully deal with our complicated past.