Wildcats hang on to defeat Crawford County in season opener 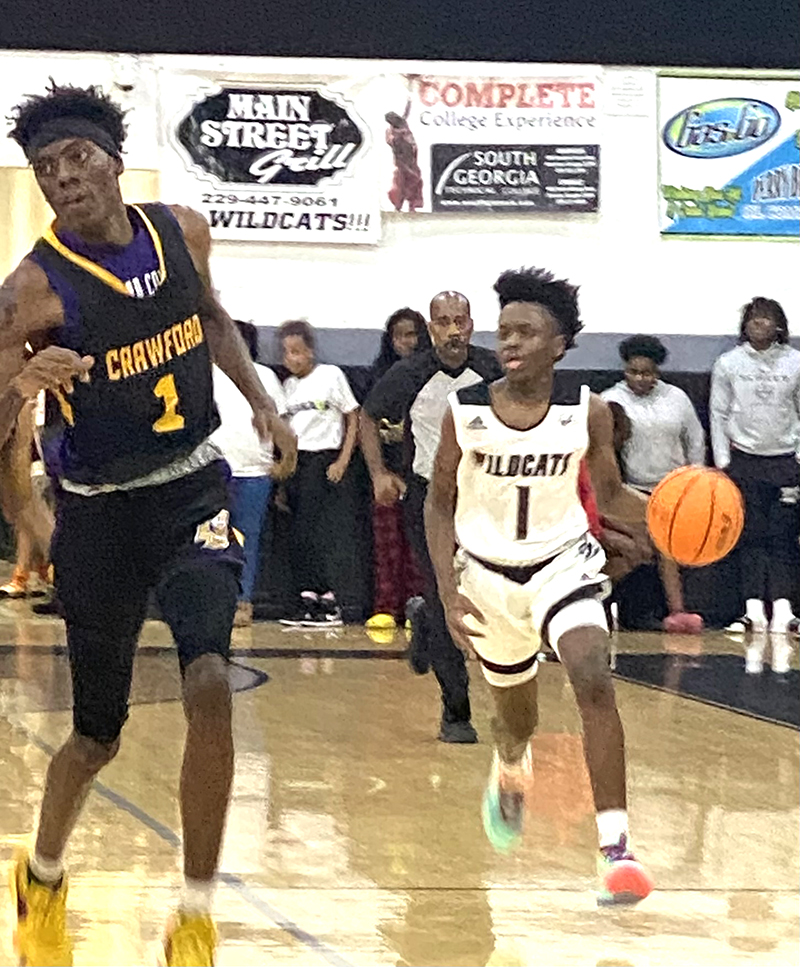 ELLAVILLE – After three quarters of play, it appeared that the Schley County Varsity Boys Basketball Team (SCHS) was on its way to a solid, double-digit win over the Crawford County Eagles (CC). However, in the fourth quarter, the Wildcats struggled with turnovers as a result of CC’s full-court pressure and the SCHS double-digit lead had dwindled down to six points with around three minutes left. Fortunately for SCHS, a three-pointer by Tyrese Cook put a stop to the Eagles’ run and shifted momentum back to the Wildcats’ favor. From that point on, SCHS reasserted its control on the contest and went on to defeat CC 76-59 in its season opener on Tuesday, November 30 at Schley County High School.

“It was our first game under the whistle and we made some careless mistakes and careless turnovers, which allowed them to get back in the ball game,” SCHS Head Coach Ernest Scott said. “That’s just an area we’ve got to get better in. I mean, we can’t have turnovers like that. We played a decent first half. We didn’t have very many turnovers, but then in the second half, in the latter part of the game, we just started making careless mistakes and that’s a part of maturity because these are young kids. We have two seniors and three freshmen, so this is a young group and we’ve still got room to grow,” Scott continued.

SCHS had three players score in double figures. Javoris Scott led the Wildcats in scoring with 22 points and knocked down six three-pointers in the contest. Jordan Hudson scored 12 points and Tyrese Cook poured in 11 in the winning cause. Zayden Walker came close to scoring in double figures with nine points and Clinton Jackson chipped in eight.

As a team, the Wildcats made a total of 10 three-pointers on the night.

The Wildcats fell behind early 7-2 in a low-scoring first quarter, but Jeremy Hamilton and Tyrese Cook drilled back-to-back three pointers to put SCHS up by one by the quarter’s end. Early in the second quarter, the Wildcats used a half-court trap to disrupt CC’s offense and scored seven unanswered points mainly off turnovers. This prompted the Eagles to call a timeout with 6:31 to go before halftime, as they trailed the Wildcats 15-7. 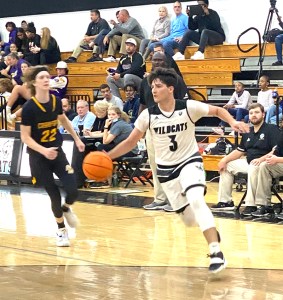 Schley County senior guard Trypp Lumpkin pushes the ball up the court for the Wildcats against Crawford County. Lumpkin scored two points in the win over the Eagles.
Photo by Ken Gustafson

However, that timeout didn’t stop the SCHS offense. The Wildcats reeled off eight more unanswered points to take a 23-7 lead over CC. During this period of the game, the Eagles went cold from the field, while the Wildcats were heating up on the inside and out. Scott drilled two three-pointers during this lengthy stretch in the second quarter and the Wildcats continued to score on the inside by beating the Eagles on the offensive glass. As a result, SCHS had a 31-14 lead at the half.

Hudson scored eight of his game total of 12 points to lead SCHS in first-half scoring.

In the third quarter, the Wildcats picked up where they left off. They went on an 8-2 run, as Scott was able to knock down two more shots from beyond the arc. During this period of the game, SCHS continued to use its half-court trap to disrupt the CC offense and forced some turnovers in the process.

However, the Eagles would not go away quietly. They were able to make a run late in the third quarter and trimmed the Wildcats’ lead to 50-38 with 1:39 to go, prompting Scott to call a timeout to get his team to regroup.

However, CC continued to make its run and had cut its deficit to 10 points at 53-43 by the end of the third quarter. The Eagles did this by forcing turnovers and capitalizing on the offensive end. 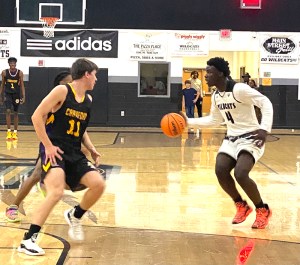 In their first possession of the fourth quarter, the Wildcats tried to work the ball around the perimeter for the best shot, but were flagged for a shot clock violation. This year is the first year ever in Georgia that a 35-second shot clock is being used in high school basketball.

However, on the Wildcats’ next possession, they did not make the same mistake. With five seconds left on the shot clock, Zayden Walker drilled a three-pointer to give SCHS a 61-48 lead.

With a little less than four minutes left in the game, the Eagles trimmed their deficit to 63-51 when Tylik Grantling hit a short jumper. They would then follow that up by forcing two more turnovers and scoring two straight baskets to cut the Wildcats’ lead to eight at 63-55. A game in which the Wildcats had complete control of was now all of a sudden in doubt, as the momentum had shifted entirely in favor of CC. 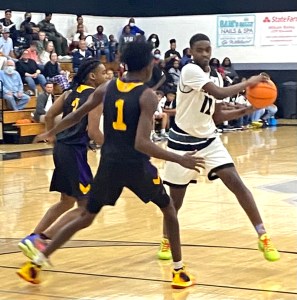 With 2:34 to play, the Eagles cut into the lead even further when Grantling sank two free throws, but fortunately for SCHS, they answered with five straight points, including a three-pointer from Cook, to extend their lead to 68-57 with two minutes left. That three-pointer by Cook was the beginning of a momentum shift back towards the Wildcats, as they scored six more points to take a 74-57 lead and would go on to win by the score of 76-59.

Grantling led the Eagles (1-2) with 34 points and Tylum Searcy scored 12 in the losing cause. 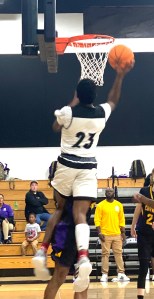 The Wildcats (1-0) will try to continue their winning ways when they travel to Cusseta, GA on Friday, December 3, to take on Chattahoochee County in their first region contest of the season. Tip-off is scheduled for 7:30 p.m.