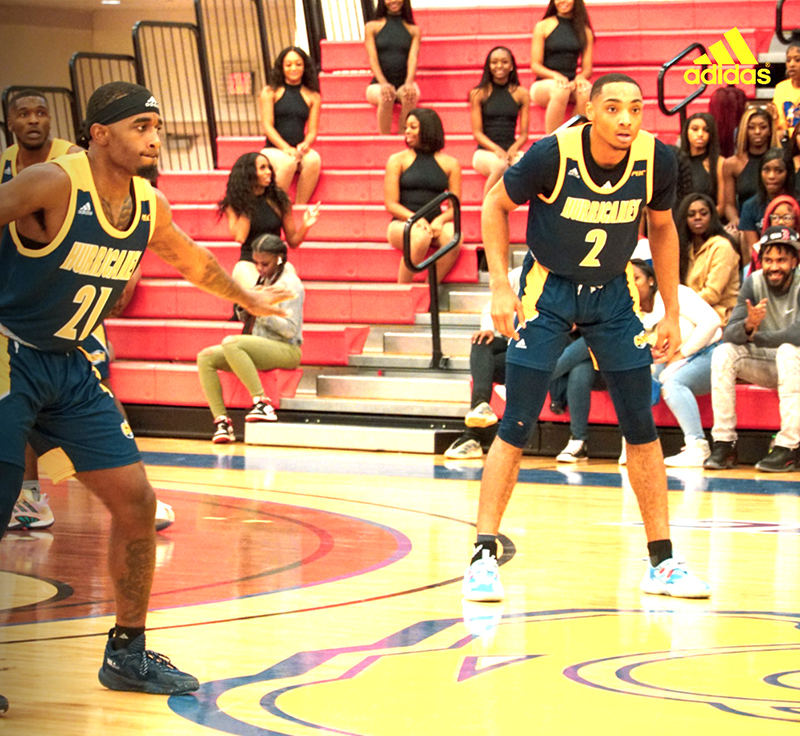 ALBANY, GA – The Georgia Southwestern State University Men’s Basketball Team (GSW) came from behind to defeat the Albany State Golden Rams 66-63 to earn its first win of the season on Wednesday night, December 1, at the Albany State West Campus gymnasium. With the win, the Hurricanes were able to avenge an 80-75 loss to ASU that took place a couple of weeks ago at the Storm Dome.

A similar result seemed to be brewing, as the Hurricanes started slow, shooting 32.9 percent overall and just 11.1 percent from beyond the arc. Turnovers were a problem early for the Hurricanes as well. They committed 12 turnovers to just seven for the Golden Rams. Late in the first half, ASU went on a run and took a 12-point lead at halftime.

GSW came out in the second half at an unbelievable pace and shaved its 12-point halftime deficit down to just one point with an 11-0 run to start the second half. That three-and-a-half-minute run put the Hurricanes right back in the game after looking lost for most of the first half. Four different Hurricanes scored during that 11-0 run: Donte Tatum, Devon Higgs, Jarett Adderton and Kahlon Whitley. The run ended when ASU’s Victor Robinson drilled a three-pointer to give the Golden Rams a 38-34 lead with 16 minutes to go. That was followed by a made free throw from Jordan Simpson to give ASU a five-point advantage.

However, the Hurricanes would not go away, as GSW freshman guard Brady Rankin responded with two back-to-back three-pointers to tie the game at 40-40.

From that point onward, the game was a back-and-forth battle, but with 2:59 to go in the game, Noah Louis gave GSW a 59-58 lead when he scored on a layup. From then on out, the Hurricanes never relinquished the lead, but with two seconds left and GSW leading 66-63, ASU’s Kevin Perry hoisted up a desperation three-point attempt from half court that rimmed out. With that, GSW was able to leave Albany with its first win of the season.

Rankin led the Hurricanes in scoring with 17 points on 5 for 10 shooting, including three made shots from beyond the arc. Donte Tatum scored 12 points and Devon Higgs chipped in 10 for GSW in the winning cause.

Malik Parker led ASU in scoring with 18 points and Victor Robinson scored 14 for the Golden Rams in the losing cause.

The Hurricanes (1-3) will hit the road once again this Saturday, December 4. They will travel to Greenwood, SC to compete against Livingstone College in the Lander University Classic. Tip-off for that game is scheduled for Saturday at 1:30 p.m. Then on Sunday, December 5, GSW will play its second game of the Lander University Classic against Johnson C. Smith University. Tip-off for that game is scheduled for Sunday at 12 p.m.