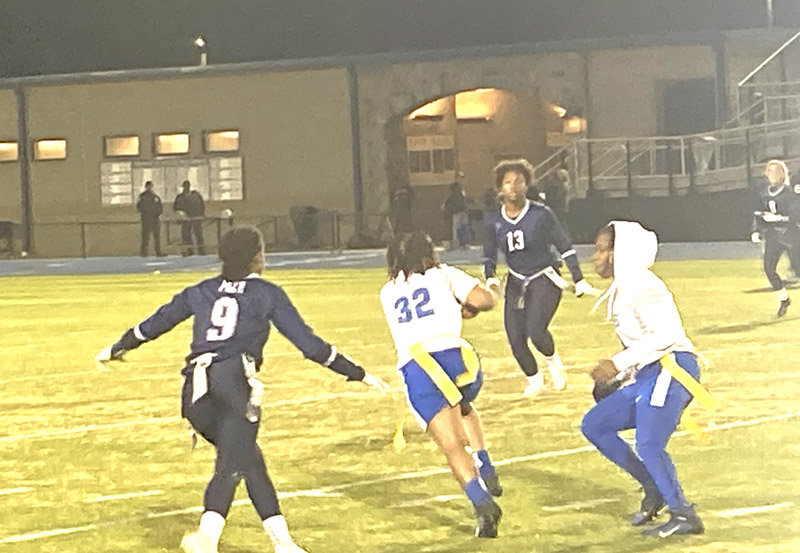 Sumter County’s Cornecia Luster (#32) intercepts a pass against Pace Academy in the Lady Panthers’ 12-6 loss to the Lady Knights. Photo by Coleman Price

ATLANTA – the Sumter County High School Girls Flag Football Team (SCHS) traveled up to Atlanta on Tuesday, November 30, to compete in the GHSA State Playoffs at Pace Academy. They were able to defeat the Lady Phoenix of New Hampstead 19-0 in the first round, but lost to the Lady Knights of Pace Academy 12-6 in the second round, thus ending their inaugural season of playing flag football.

In the Lady Panthers’ first game against NHHS, they took control early and never looked back. Tiffani Goodman opened the scoring with a touchdown and Anniya Tyson followed that up with a 60-yard interception and run back for a touchdown.

Goodman then scored her second touchdown of the game and completed a one-point conversion to complete the scoring for SCHS.

On defense, the Lady Panthers were just as efficient, as both Tyson and Madison Smith each pulled three flags (tackles). Kierra Wilkerson also pulled two flags in the contest against the Lady Phoenix. 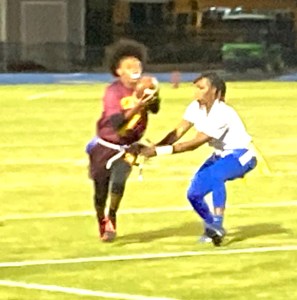 Sumter County’s Tiffani Goodman pulls the flag of a New Hampstead player. Goodman scored a total of three touchdowns in the two games played by the Lady Panthers.
Photo by Coleman Price

The win over NHHS put the Lady Panthers into the “Sweet 16” of the GHSA State Playoffs. Their next opponent would be the Lady Knights of Pace Academy, who were hosting the three-team bracket. Unfortunately for the Lady Panthers, there would not be a repeat of their accomplishment against NHHS. Though SCHS fought extremely hard, they fell to the Lady Knights 12-6 to end their season.