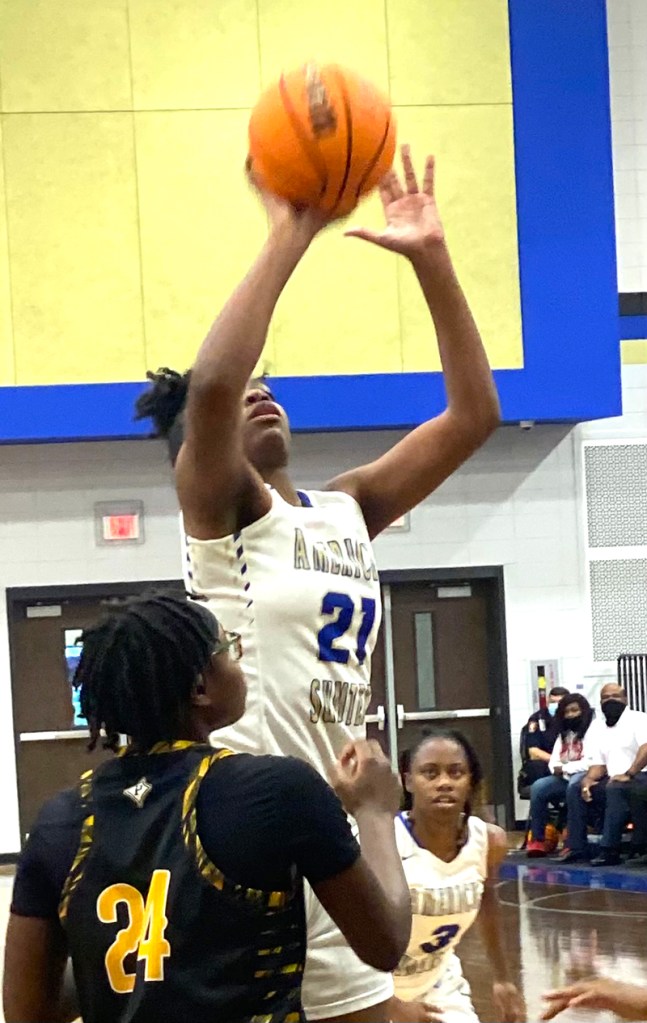 Sumter County senior forward Trinity Jackson (#21) goes up to score against Peach County. Jackson scored 13 points in the contest and was the focal point of the SCHS offense early in the game. Photo by Ken Gustafson

AMERICUS – After their disappointing 43-39 loss to Lee County in Leesburg the night before, the Sumter County Varsity Girls Basketball Team (SCHS) came into their Region 2-AAA game against Peach County determined to play the way they know they are capable of playing and to show their fellow students, fans, the community and the other teams in the region that they will be a team to be reckoned with as far as Region 2-AAA is concerned. By playing solid, half-court defense, being patient on offense, getting the ball inside to Trinity Jackson and forcing turnovers, the Lady Panthers did just that. They were able to drub the PCHS Lady Trojans 59-21 on Saturday, December 4, at the Pitt Gymnasium on the new SCHS campus.

“I don’t know. Maybe it’s clicking and we’re getting a little chemistry,” SCHS Head Coach Sherri Harris said. “We started out a lot better. I think that’s probably our best outing overall, offense and defense. We’re trying to play inside out, meaning we need to get Trinity Jackson going really early in every game. Not a whole lot of people in the state have a person that can guard her. She’s elite because she is a six-foot tall post player that plays with her back to the basket. We try to use that to our advantage and tonight, we had a good chance because she got going early and I thought we played outstanding defense.” 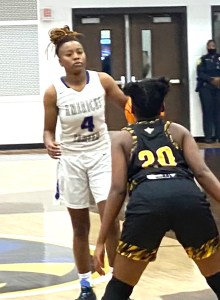 SCHS junior guard Aviyonna Clemons led the Lady Panthers in scoring with 17 points and Jackson poured in 13. Tiffani Goodman was also in double figures with 10 points and D’eria Clark chipped in nine points in the winning cause.

For the next minute or so, the Lady Panthers continued to play solid defense and were able to score off turnovers. By the 4:45 mark of the second quarter, PCHS called a timeout with SCHS in the lead 23-7. 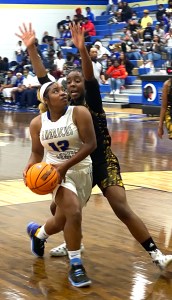 However, that timeout didn’t stop the Lady Panthers on offense. While they didn’t press to turn the Lady Trojans over, they continued to play solid half-court defense and they were able to work the ball around on offense to find the open man on the inside.

By halftime, the Lady Panthers were firmly in command with a 32-11 lead.

During the second half, the Lady Panthers were able to maintain the status quo and continued to limit PCHS by playing solid defense. By the 3:01 mark of the fourth quarter, SCHS had a 50-19 lead and would go on to win 59-21.

The Lady Panthers are now 3-3 overall and 2-0 in the Region 2-AAA standings. They will try to keep their winning ways going when they travel up to Thomaston on Tuesday, December 7, to take on another region opponent, the Lady Knights of Upson-Lee. Tip-off for that game is scheduled for 6 p.m.