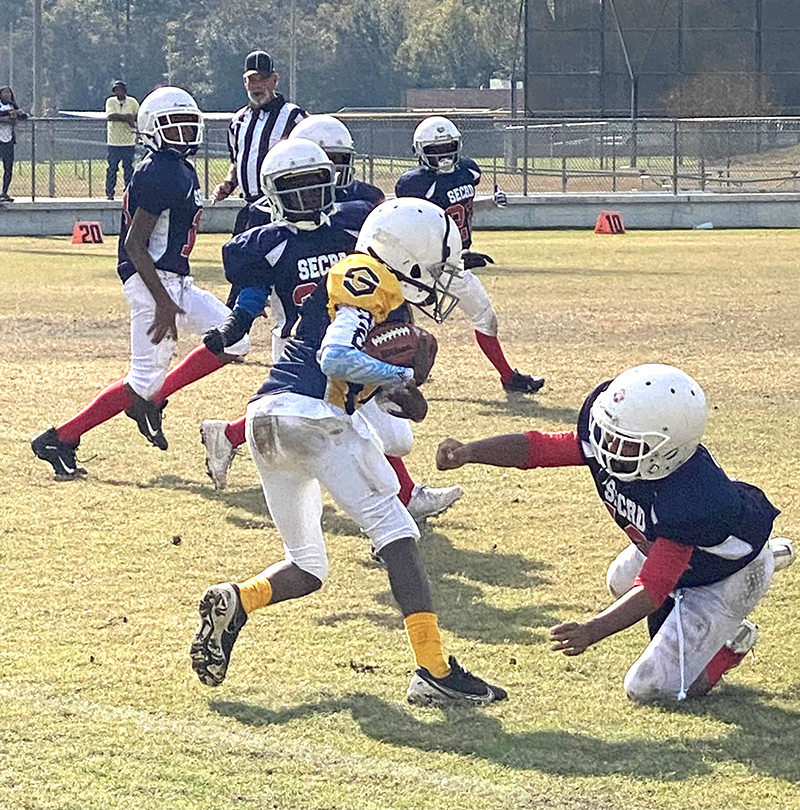 Sumter County 10U All-Star running back Malik Paul runs for yardage against Swainsboro-Emanuel in the 10U Championship Game of the GRPA South Georgia Regionals. Photo by Ken Gustafson

SPRINGFIELD, GA – All three of the Sumter County Parks and Recreation Department (SCPRD) all-star football teams accomplished something this year that had never been done before in the history of the Sumter County Recreation Department. All three All-Star teams: the 8U, 10U and 12U clubs, each won its respective Georgia Recreation and Parks Association (GRPA) District 3 Tournament in 2021 and advanced to the South Georgia Regionals, which were held at Effingham County High School in Springfield, GA on Saturday and Sunday, December 4-5. All three teams ended up advancing to the championship game of each of the three age divisions and all three were one win away from advancing to the GRPA State Championship. However, all three teams fell in their region championship games. The 8U team lost to Glynn County 18-8, the 10U team lost to Swainsboro-Emanuel 20-14 and the 12U team fell to the Glynn County 12U All-Stars 38-14.

Nevertheless, this was still a historic accomplishment for the SCPRD, as this is the first time ever each team in the three age groups won its district tournament and qualified for the regionals in the same year. This was also an amazing accomplishment due to the fact that the SCPRD did not have football a year ago because of the COVID-19 Pandemic. 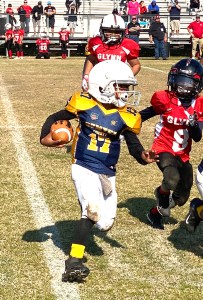 Sumter County 8U All-Star Avienn Gonzalez tries to run for yardage in his team’s championship game against Glynn County.
Photo by Ken Gustafson

Having won its semifinal game over Thomson-McDuffie in the South Georgia Regionals on Saturday, December 4, the 8U Sumter County All-Stars faced Glynn County on Sunday for the region championship. GC opened the scoring when Cory Wheeler scored a rushing touchdown from just a few yards out. The SC All-Stars tried to answer, but struggled offensively, though the team made some great plays on defense. GC added to its lead when Ayden Edwards scored with less than a minute left in the third quarter to make the score 12-0. Then in the fourth quarter, the boys from Brunswick extended their lead to 18-0 when Wheeler scored his second touchdown of the game.

The boys from Americus finally got on the scoreboard when Stephen Kearse rumbled 40 yards for a touchdown. Caden Jordan was able to convert the two-point try, but that would be as close as SC would get, as they went on to lose to the GC 8U All-Stars 18-8.

“We had a wonderful season, but we had a slow start today and it led to the score being like that,” SC 8U Head Coach Brandon Gooden said. “I won’t make any excuses. We are All-Stars, so we are supposed to come out here and compete, but these kids worked extremely hard for about a month and a half through any cold weather and rain, doing everything to try to get to the next level. I can’t say that I’m not proud of these young men and I hope they have a successful career.” 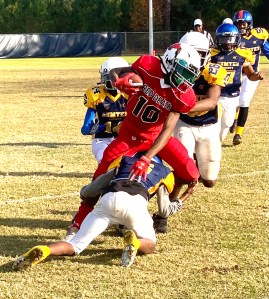 This was an extremely hard-fought contest between two evenly matched teams.

The SC team relied mostly on the running attack of Malik Paul. Paul scored the first touchdown of the game to give the boys from Americus a 6-0 lead.

SWE responded with a touchdown of its own to tie the game at 6-6, but Sumter County responded again when Chaston Green caught a touchdown pass. The extra point was good and SC led 14-6 at the half.

However, SWE responded when Kyle Johnson scored a rushing touchdown and the boys from Swainsboro tied the game at 14-14 by converting the extra point.

Then with a little more than four minutes remaining in the game, Johnson scored the go-ahead touchdown to give SWE a 20-14 lead. 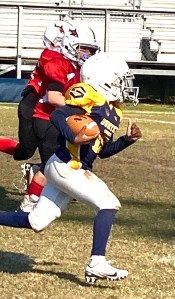 The SC 10U All-Stars had chances to tie and take the lead. One chance in particular was created when running back Jaylen Dice ran the ball all the way down to the SWE 23-yard line. However, the SC team struggled with penalties, which made it more difficult for them to score. Then with a little less than a minute to play, SC had the ball in SWE territory, but a bad snap from center went over the quarterback’s head and the ball was recovered by SWE. That sealed the game for the boys from Swainsboro and they went on to defeat Sumter County 20-14.

“I’m proud of the way that they fought today,” SC 10U Head Coach Jonathan Gooden said of his team. “We were up most of the game, but we fell short. We came down here today and we wanted to be on the other end, but it just didn’t happen.” 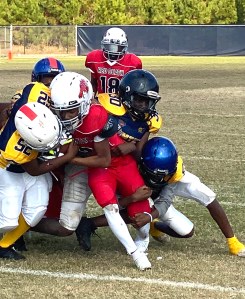 Sumter County 12U All-Stars Jayden Sims (#52), Zayden Monts (#30) and one other Sumter County player try to rap up and tackle a Glynn County ball carrier.
Photo by Ken Gustafson

With the 8U and 10U teams eliminated, that left the SC 12U All-Star team as the last hope for Sumter County to have a berth in next week’s GRPA state championships, but unfortunately, the 12U All-Stars ran into a buzz saw in the form of the 12U Glynn County team. From the start, things did not go well for the boys from Americus, as GC’s Nigel Gardner took the opening kickoff 83 yards for a touchdown. The point after attempt by Braxton Davis, which counts as two points, was good and GC led 8-0.

Later on in the first quarter, GC forced and recovered an SC fumble. Then they took advantage of the turnover when Reece Dixon ran the ball 55 yards for another GC touchdown. Then Waseem Murray, who was instrumental in forcing the SC fumble, added to GC’s lead when he ran the ball 58 yards for a touchdown. Jaylin Walton was able to catch a touchdown pass to put SC on the board and he would later score by running a kickoff back for a touchdown, but it would not be enough. The GC team added another touchdown from Braylon Johnson and would eventually go on to win by the score of 38-14. 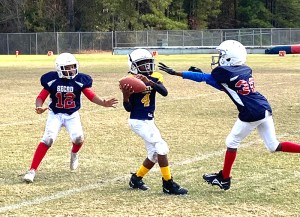 “That (GC) is a really good team. That is a very oriented, very well coached team. They don’t beat themselves,” SC 12U Head Coach Brendon Sims said. “They capitalized off our mistakes, which we did today. We actually beat ourselves today. We just have to get back in the lab and get ready for next year.”

Many of these players will move up in the age divisions next year, which bodes well for the SCPRD football program. Now that football is over for this year, many of these kids will now be playing basketball in the SCPRD, as well as baseball and track. 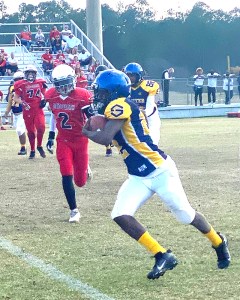 As for the 12 year-olds, they will move up to join various middle school football teams next year, which will provide a solid feeder system for the local high schools.