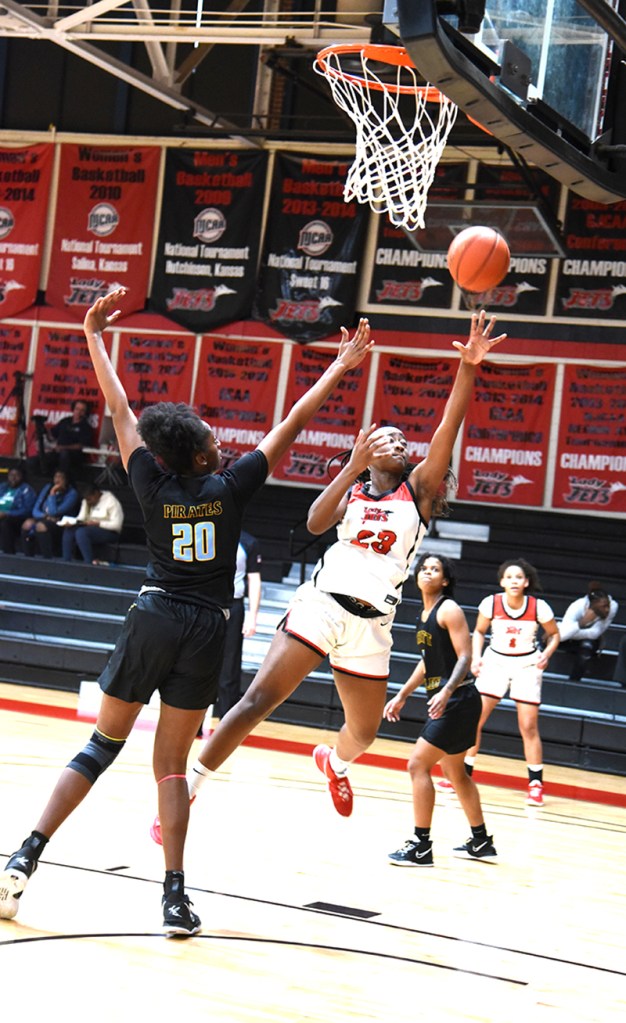 AMERICUS – On Saturday, December 4, the 21st nationally ranked South Georgia Technical College Lady Jets (SGTC) secured a 77 – 56 victory over Chattahoochee Valley Community College at the Hanger to move to 8 – 3 on the season.

“It was good to get back on the court Saturday after a pretty solid half against Albany Tech on Wednesday to see if we are improving,” said SGTC Lady Jets head coach James Frey.  “I think we have done some things differently in practice and in our playing rotations that are starting to pay off.  It still all hinges on turnovers for us.  If we take care of the ball and not give it away, we are a solid team.  Getting them to understand that has been a challenge.”

The Lady Jets started the game off slowly and were only up 16 – 15 at the end of the first 10-minutes of playing time.  The second quarter the Lady Jets dominated the Lady Parents outscoring them 18 – 6 to pull into halftime with a 34 – 21 lead.  SGTC came back in the third quarter and outscored them 22 – 14 but Chattahoochee Valley evened the playing field matching SGTC’s fourth quarter 21 points to end the game, 77 – 56.

“Freshman Fanta Gassama had an incredible week or us.  She had 15 points and 16 rebounds against Albany Tech and followed that up 16 points and 25 rebounds against Chattahoochee,” said Coach Frey.  “When she is focused, she is a rebounding machine.  It is just a matter of her doing it consistently.”

Coach Frey also had words of praise for sophomore Kamya Hollingshed and freshman Alexia Dizeko.  “Kamya has started shooting better from the three for us and that is opening things up inside. Alexia Dizeko has been very consistent all year and continues to be.  She had a double-double Saturday and that was her third of the year.”

Freshman Loes Rozing scored five points and then Luana Leite, Mame Thiaw, and Laurie Calixte closed out the scoring for the Lady Jets with four points each.

“We have a huge game at East Georgia on Wednesday and they are very much improved this year.  We will need two good days of practice and to really continue to improve to have a chance to beat them,” said Coach Frey.  “I am excited to see our continued growth.”

The Lady Jets face East Georgia in Swainsboro at 5:30 p.m. on Wednesday, December 8th.  East Georgia is currently 4 – 4 overall and 1 – 2 in the GCAA.  They have lost to Pensacola State College, Chipola, Albany Tech, and Georgia Highlands.