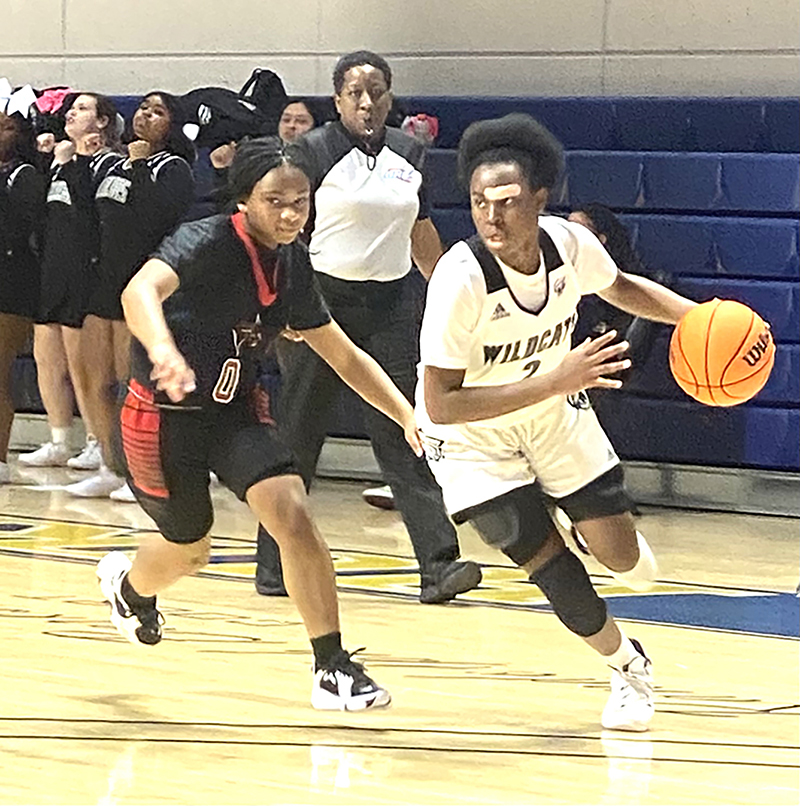 AMERICUS – The rivalry game between the Schley County Lady Wildcats (SCHS) and the Macon County Lady Bulldogs (MCH) lived up to its billing on Saturday, December 11, as both this game and the varsity boys’ game between the two schools was moved to the GSW Storm Dome to accommodate both fan bases. Up until the 3:44 mark of the fourth quarter, the game was very much in doubt. However, SCHS freshman guard Jesstynie Scott scored six straight points and senior forward Berkley Goodin, who was playing with four fouls at the time, made a crucial defensive play by taking a charge with a little more than a minute to go. Those two factors proved to be key moments in the Lady Wildcats’ 38-32 victory over MCH.

“Berkley was playing with four fouls going into the fourth quarter, so we told her, ‘You’ve got to play smart. You’ve got to play smart’ and for her to get their early, step up, plant her feet and take on that charge at a time that we needed some positive momentum, we needed some positive energy. That’s just a senior leader being a senior leader,” SCHS Head Coach Brent Moore said. “Jess is Jess. She motivates and pushes our team and makes everyone else around her better. That was two of your team captains stepping up in the fourth quarter when you really needed it.” 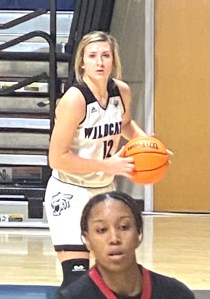 Schley County senior forward Berkley Goodin made a key defensive play in the fourth quarter when she stepped in front of MCH guard Deziya McLendon and took a charge. Goodin scored three points in the win over the Lady Bulldogs.
Photo by Ken Gustafson

Scott led all scorers with 29 points and had seven steals, three assists and two rebounds to lead the Lady Wildcats to victory. Daneria Thornton had four points, Berkley Goodin had three and Sarah Barnhill chipped in two points in the winning cause.

The Lady Wildcats fell behind 4-0 early in the game, but went on a 5-4 run that was capped off by a transition basket from Scott. Both teams traded baskets for the remainder of the first quarter, but SCHS had a 9-7 lead by the quarter’s end.

Over the first five minutes of the second quarter, the Lady Wildcats outscored MCH 8-4, but struggled with turnovers in the waning moments of the first half. In spite of that, the Lady Wildcats were able to get a layup from Goodin at the buzzer and took a 21-15 lead into halftime.

Over the first three minutes of the second half, the Lady Bulldogs made a 6-2 run that was capped off with two made free throws by Moniyah Roberts, but Scott responded with two straight baskets to put the Lady Wildcats back up by six at 27-21. However, the Lady Bulldogs fought back with an 8-2 run to close out the third quarter. This was the result of a combination of MCH forcing turnovers and cold shooting by the Lady Wildcats. 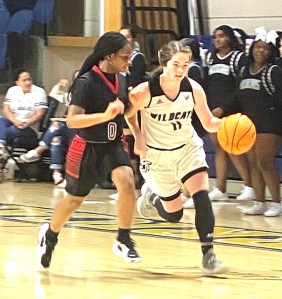 With about six minutes to go in the game, the Lady Bulldogs took a 31-29 lead on a basket by Deziya McLendon, but the Lady Wildcats stepped up their defensive pressure and Scott scored six straight points to give SCHS a 35-31 lead with 3:44 to play.

With 26 seconds left, the Lady Wildcats had the ball when Scott was fouled. She was able to make both free throws to give SCHS a 37-32 lead and would later hit another foul shot with nine seconds left to seal the 38-32 victory for SCHS.

McLendon led the Lady Bulldogs with 14 points and JaSasha Joiner scored eight in the losing cause.

The Lady Wildcats’ win over MCH came after another strong performance on Friday, December 10, in which SCHS defeated the Central (Talbotton) Lady Hawks 45-34. In that game, Scott led the Lady Wildcats in scoring with 17 points and Goodin had 10.

With the win over MCH, the Lady Wildcats improve their overall record to 5-1 and they are now 4-0 in Region 5A-Public competition. They will try to improve on that record when they travel up to Butler on Tuesday, December 14, to take on the Lady Vikings of Taylor County in another region contest. Tip-off for that game is scheduled for 6 p.m.