Second quarter domination leads to victory for Wildcats over Brookstone 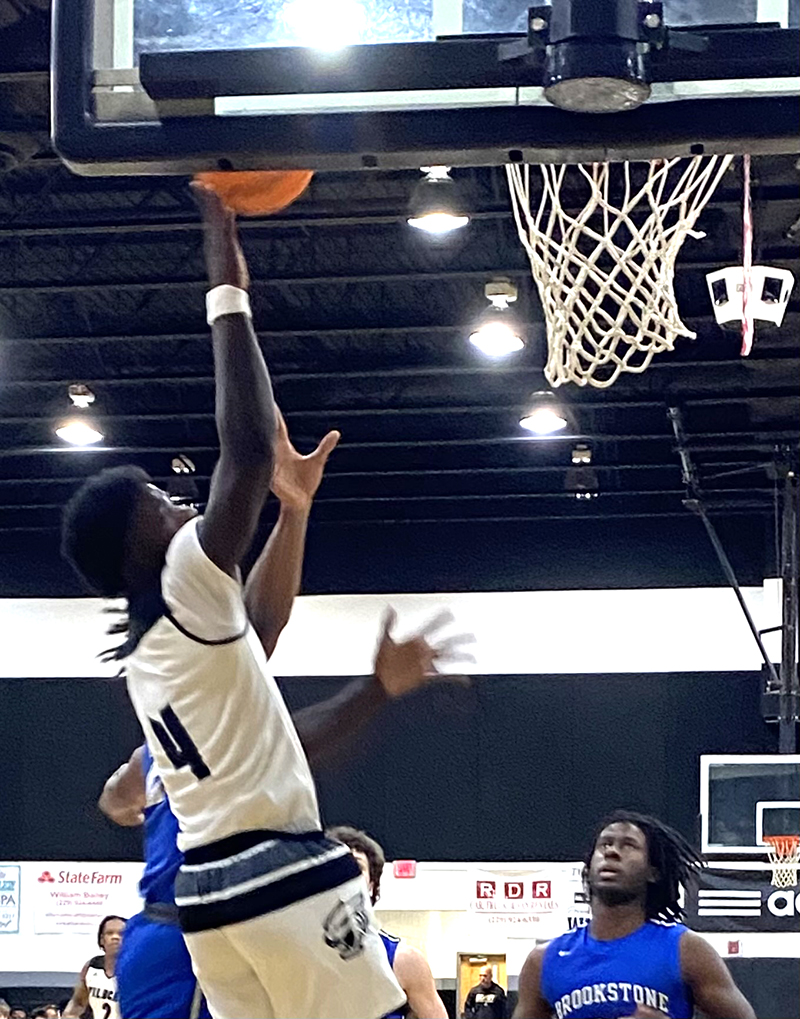 Schley County freshman guard Zayden Walker (4) goes up for a rebound and tries to score. Walker led the Wildcats with 16 points in their win over Brookstone. Photo by Ken Gustafson

ELLAVILLE – After a 62-43 victory over Marion County on Friday, December 17, the Schley County Varsity Boys Basketball Team (SCHS) came into Saturday’s game against the Brookstone Cougars (BKS) with hopes of extending their winning streak to three games. Thanks to a dominating performance in the second quarter that saw the Wildcats outscore the Cougars 21-12, SCHS was able to take control the rest of the way and went on to defeat BKS 55-31 on Saturday, December 18, at Schley County High School.

Saturday’s game against BKS was the Wildcats’ final game of 2021 and they will not be in action until Tuesday, January 4, 2022 when they host Manchester in a Region 5A-Public contest.

At the end of the first quarter, SCHS led 13 -6, but the Wildcats turned up their defensive pressure in the second quarter and were able to score points off turnovers. They were also aided by strong outside shooting, as Tyrese Cook, Trypp Lumpkin and Bryce Blalock all knocked down three-pointers in the quarter. 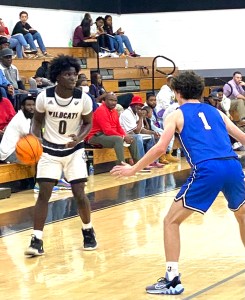 The Wildcats weren’t quite as dominant in the third quarter of this game as they were in the second quarter, but they did just enough to maintain their double-digit lead by outscoring the Cougars 10-7. This was partly due to strong defense played by SCHS and cold shooting by the Cougars, which occurred throughout the game.

SCHS freshman guard Zayden Walker led the Wildcats in scoring with 16 points and sophomore guard JaLewis Solomon was also in double figures with 13 points. Both freshman forward Jordan Hudson and senior forward Bryce Blalock each chipped in six points for the Wildcats in the winning cause. 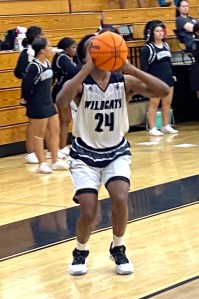 Schley County senior guard Jeremy Hamilton (24) is about to knock down a three-pointer early in the third quarter against Brookstone.
Photo by Ken Gustafson

The Wildcats jumped out to a 9-3 lead in the first quarter and that run was capped off with a long pass from Trypp Lumpkin to Walker, who scored on a layup. For the remainder of the first quarter, things were fairly even between the two teams, but SCHS led 13-6 by the start of the second quarter.

Then with 1:50 to go before halftime, Walker drove baseline, scored and was fouled on the play. He made the foul shot to complete the three-point play, giving SCHS a commanding 32-15 lead. The second quarter domination continued for the Wildcats, as they used their defensive pressure to score points off turnovers. This was all part of a dominating performance by SCHS and it led to a 34-18 lead at halftime.

Walker scored 12 of his game total of 16 points in the first half to lead the Wildcats’ attack. 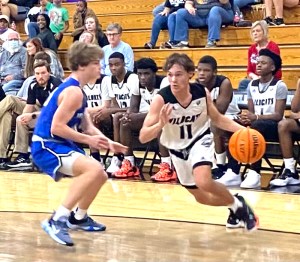 Senior shooting guard Jeremy Hamilton was able to get things started off right for SCHS in the second half when he nailed a three-pointer. Over the next several minutes, the Wildcats continued to maintain their double-digit lead and they took a 42-25 lead on a free throw from Blalock. This was due in part to solid defensive play by the Wildcats, but also because of cold shooting from the Cougars, as they continued to struggle in the second half. 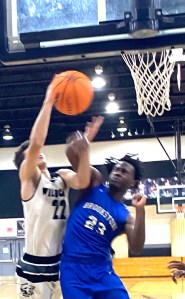 Schley County senior forward Camron Barnes (22) goes up to score and gets hacked by Dylan Thornton of Brookstone.
Photo by Ken Gustafson

In the fourth quarter, the Wildcats continued to limit the Cougars’ scoring opportunities with solid defense and they outscored BKS 11-6 to salt away a 55-31 victory.

Jordan Daniels led the Cougars in scoring with nine points and Haze Voltz had eight in the losing cause. 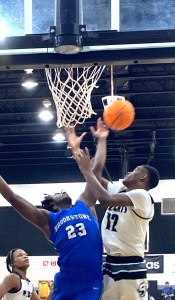 Schley County freshman forward Jordan Hudson (12) goes up to score against Brookstone. Hudson scored six points in the win over the Cougars.
Photo by Ken Gustafson

With the win, the Wildcats extend their winning streak to three games and they are now 6-3 on the season. They are also currently 4-2 in Region 5A-Public competition. They will take the rest of 2021 off and will resume action on Tuesday, January 4, 2022 at home against Manchester. Tip-off for that game is scheduled for 7:30 p.m.