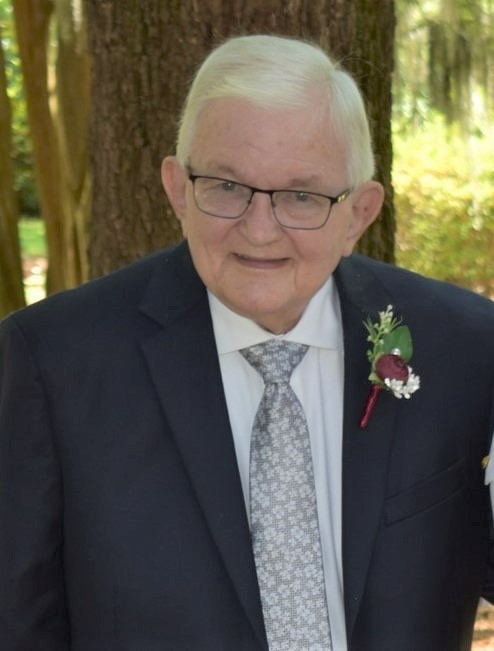 Dr. Joseph R. Beauchamp, 82, of Bainbridge, went to be with Jesus on Friday, December 17, 2021 at Phoebe Putney Memorial Hospital in Albany, Georgia.

Early years (1939-1952): Joseph Beauchamp was the middle child of Lofton and Dorothy Beauchamp. He said that being the middle child might explain a lot about him. Bro. Joe would often recount that when he was about 12 years old he began to feel the call to be a preacher. There are many “cousin” stories about Joe preaching funerals for various farm animals and pets that died on the Beauchamp and Fluorney farms.

Teen years (1952-1959): Joe was thankful that his Dad encouraged him to join the Navy when he was seventeen years old. After he enlisted in the Navy, he lived out the rest of his teen years in service to his country, as a hospital corpsman, in the United States Navy. He had many fond memories of his time on the USS Hornet and visiting ports all over the west coast and the world. It was during this time that Joe had an encounter with the Lord on his bunk/rack on the USS Hornet, that changed his life and the path of his life. To quote Joe, “I can’t explain what happened, but the Lord saw through my doubt and fear and made Himself real to me. He got my attention…”

Young adult years (1959-1969): When Joe completed his service in the Navy, he went immediately to his pastor, Ernest Vines, and with his guidance made the decision to enter full time ministry. Dr. Vines helped him enroll in Norman College. Joe graduated from Norman College in 1962 with an Associate of Arts Degree. In 1965, he graduated from Valdosta State College with a Bachelor of Arts Degree.

On the first day of his New Testament class, at Norman College, he met his future wife, Mary Alice Ezell. In the midst of all this, Joe was called to his first pastorate at the Beulah Baptist Church in Quitman, Georgia. He pastored there from 1960 – 1964 and became lovingly known from then on as “Brother Joe.” In 1963 Mary Alice and Bro. Joe were married at the Pine Forest Baptist Church, Bainbridge, Georgia. In 1965, their older daughter Faith was born, and 1967 their younger daughter Hope was born. Bro. Joe would say, “Our lives were never the same after these two girls came into our lives.” He was the type of Dad that served as the PTA President and Band Booster President for the girls schools. In 1965, Bro. Joe was called to pastor the Lenox Baptist Church, Lenox, Georgia. At the same time, he was a teacher at Adel Elementary School. In 1969, the family moved to Wake Forest, North Carolina where Bro. Joe was enrolled at Southeastern Baptist Theological Seminary. During this time, he was also called to pastor the Jonesboro Baptist Church, Blackstone, Virginia. Bro. Joe graduated from Southeastern Seminary with a Master of Divinity with Languages in 1972. They lived in North Carolina and Virginia from 1969 – 1973.

Later years (1973-present): After graduation from Seminary, Bro. Joe pastored at Bloomingdale Baptist Church during 1973-75. He left there and moved to Bainbridge, Georgia, Mary’s hometown. He was called to Bethany Baptist Church in 1975 and was there until 1979. Joe taught at Miller County Middle School for a year from 1979 – 1980. He then became the pastor of Black Jack Baptist Church where he served for eight years. During his ministry there, he also received his Doctorate of Ministry in 1983 from the Southern Baptist Center for Biblical Studies, Jacksonville, Florida.  He later served on the board of the school for several years. In 1987, Bro. Joe was called to be the Director of Missions of the Tucker Baptist Association, where he joyfully served until retiring in 2010. While in Tucker Association, he enjoyed visiting and preaching at the churches. He also led many Tuesday night Bible study classes, started two prison ministries in Mitchell County, and helped with Camp Tucker. Bro. Joe and Mary had many fond memories of their mission trips to Pittsburgh, Pennsylvania and Maine with Tucker Association. While living in Camilla, Bro. Joe and Mary were blessed with what they considered to be “the four greatest grandchildren on this earth.” Chad was born in 1989, Blake was born in 1991, Zachary was born in 1997, and Madison was born in 1999. As a Granddaddy, Bro. Joe was always at any Grandparent’s Day activity and such for his grandchildren. He loved being a Granddaddy and would even attend field trips with his grandchildren when needed. When Chad played football at Westwood Academy in Camilla, Georgia, Bro. Joe was asked to be the Chaplain of the 2006 – 2007 Westwood Wildcats football team. He continued serving at team practices and on the sidelines at games for many years and was the team Chaplain when the Westwood Wildcats won the State Championship in 2010 and 2011.

In 2011 Bro. Joe was diagnosed with lymphoma and colon cancer. While undergoing treatment for lymphoma, he became so weak that he could not get off of the couch and this was the beginning of the “Couch Potato Ministry” on Caringbridge. After recovering, he continued his Couch Potato Ministry calling it “CouchPotatoRedux.” This ministry continued until September 13, 2021 which was his last post. All of his devotions are still available online at couchpotatoredux.weebly.com

After retirement Bro. Joe worked as an interim pastor at several churches. The last church he pastored was Pebble City Baptist Church in Mitchell County. In 2016, Bro. Joe had a stroke. That same year, he lost his beloved Mary Alice to dementia. He stayed by her bedside until her last breath on this earth. Following Mary’s homegoing, Bro. Joe fully retired and built a “pool house” in Hope and Jeff’s backyard where he lived until he went to his eternal home in heaven.

Our Daddy, Bro. Joe, will be remembered for his love of Jesus and people, his generosity and giving nature, his sense of humor, and his desire to be an encouragement to everyone he met. He never met a stranger. We have faith that upon his arrival in heaven, he heard the words, “Well done my good and faithful servant.”

He was preceded in death by his parents, Dorothy Cooper Beauchamp and Lofton Beauchamp and by his wife of 52 years Mary Alice Ezell Beauchamp.