Hurricanes fall on the road to UNG 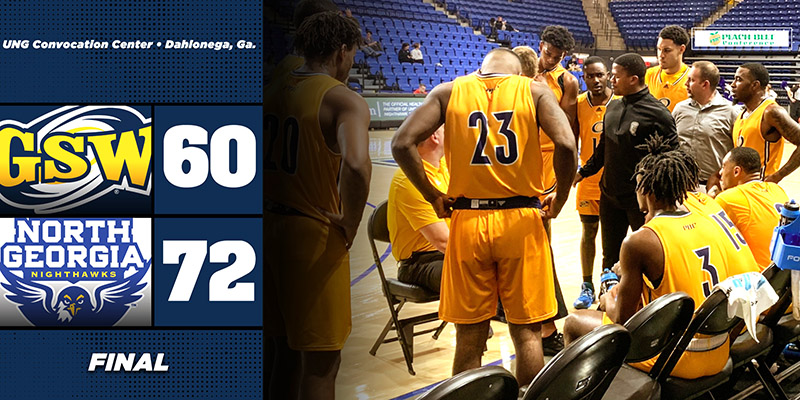 GSW Men’s Basketball Team huddles up during a timeout at the North Georgia game. Photo by GSW Athletics

The first half was a back-and-forth affair between both teams, with GSW matching UNG runs for the first 20 minutes. The runs were few and far between, however, as both teams played solid defense. By halftime, the Nighthawks only had a 25-23 lead.

The second half was a much more high-scoring affair for both teams, but the Nighthawks pulled away after two huge runs early in the second half. GSW brought it back to within single digits with four minutes to go, but could not come any closer as the Nighthawks came away with the 12 point home win.

The Hurricanes had three players score in double figures. Lars Nilsen was the team’s leading scorer with 14 points, but Devon Higgs and Kevin Kone poured in 12 and 11 points respectively. Both Higgs and Kone nearly posted double-doubles in this game. Higgs pulled down a total of nine rebounds and Kone had eight.

The Hurricanes (4-6, 0-2 PBC) will look to regroup when they take on 25th ranked Georgia College on Saturday night, January 8 in the Storm Dome. Tip-off is scheduled for 7:30 p.m.