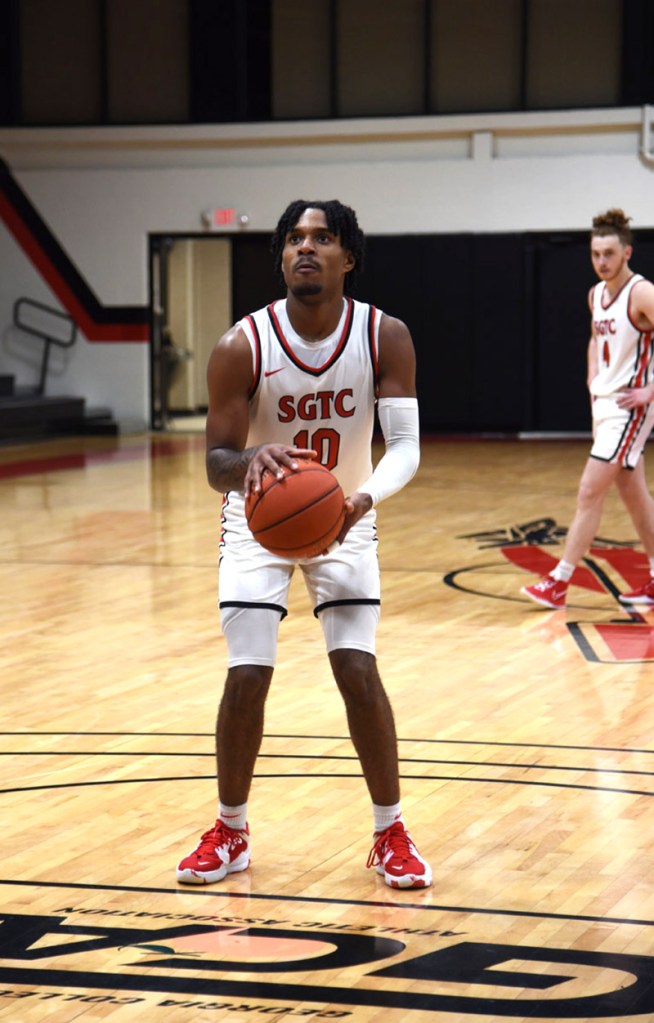 Marvin McGhee III (10) is shown above hitting a foul shot with 1.3 seconds remaining to lift the Jets to an 86 – 85 win over the defending GCAA champion South Georgia State College Hawks. Photo by Su Ann Bird

AMERICUS – Sophomore guard Marvin McGhee III of Atlanta sank one of two free throws with 1.3 seconds remaining on the game clock to lift the South Georgia Technical College Jets to an 86 – 85 win over the GCAA defending champion South Georgia State College Hawks in the Hangar on the Americus campus.

The win put the Jets into a tie for first place in the Georgia Collegiate Athletic Association (GCAA) with Albany Technical College with a 1 – 0 record.  The Jets are now 9 – 6 overall. South Georgia State and Andrew College are the only other GCAA teams with conference games and they are currently in last place with a 0 – 1 record.  South Georgia State is now 11 – 4 overall and 0 – 1.

“We expected this to be a tough game since they are the defending conference champions and they are very well coached,” SGTC Jets head coach Chris Ballauer said. “We made some adjustments at half time and I think that helped us win.”

Ballauer acknowledged that the win was not pretty but an ugly win is better than a pretty loss.  “You don’t win many games turning the ball over 30 times. Despite all those turnovers, I was proud of how the guys handled the ups and downs of the game staying focused on the task at hand,” Ballauer said. Ballauer added that his team will have to get right back at it on Saturday, January 8 when they travel to Southern Crescent for a 3 p.m. game against another tough team.

“I am really looking forward to see how we do against Southern Crescent,” Ballauer said. “Last year, we struggled after big wins in the conference.” Southern Crescent is currently 2 – 6 on the season and the game on January 8 at 3 p.m. will be their first conference match-up.  “If we play up to our capabilities, we should be fine, but we need to protect the ball,” Ballauer said. 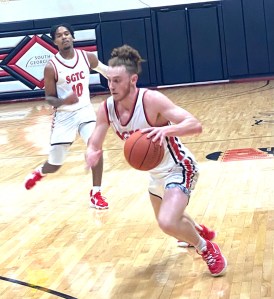 SGTC sophomore guard Will Johnston is seen here trying to drive the baseline against South Georgia State. Johnston was the leading scorer for the Jets with 21 points and he had seven rebounds, five assists and one blocked shot.
Photo by Ken Gustafson

Sophomore guard Will Johnston was the leading scorer for the Jets in the game against South Georgia State.  He had a total of 21 points, seven rebounds, five assists, and one blocked shot.  He was six of six from the foul line and three of four from the three-point line.

Close behind Johnston in points was sophomore guard Marvin McGhee, III, with 20 points including the game winning free throw with 1.3 seconds remaining.  He was three of six from the foul line, three of five from the three-point line and had nine rebounds, two assists, and one steal. 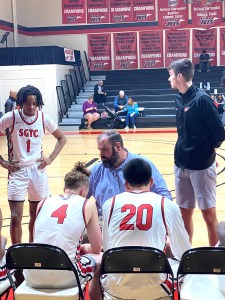 SGTC head coach Chris Ballauer coaches up his team during a timeout in the Jets’ game against South Georgia State.
Photo by Ken Gustafson

Sophomore guard Kallin Fonesca from Breaux Bridge, LA, was the only other Jet in double-digits.  He had 13 points including three three-point shots, two free throws, and an extra basket.  Freshman guard/forward Nathan Wilson came off the bench to score nine points.  He was four of four from the foul line, one of two from the three-point line and one of two under the basket.  He had three rebounds, two blocked shots and one steal.

Sophomore forward Jalen Reynolds was the leading rebounder for the Jets with 13 and he, Justice Hayes, and Malik Battle all tossed in six points each.  Bryce Turner closed out the scoring for the Jets with five points.