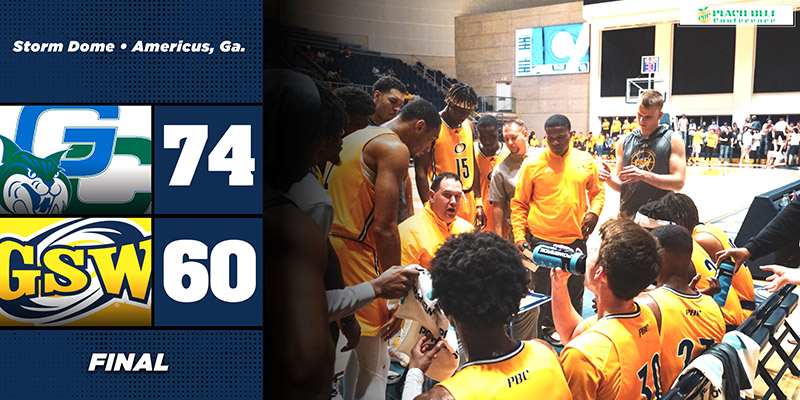 GSW Head Coach Aaron Coombs talks to his team during a timeout in the Hurricanes’ PBC game against Georgia College. GSW fell to the Bobcats 74-60. Photo by GSW Athletics

The Hurricanes hung tight against a solid GC squad. GSW started out hot, holding a 15-6 lead at the under 16 timeout. Kahlon Whitley shot the ball well from beyond the arc in the first half and made 4 of 6 three-pointers for the game as part of his game total of 15 points. However, the Bobcats found their groove and ended the first half with a 30-25 lead.

Unfortunately for GSW, GC broke it open late in the second half and ended GSW’s upset bid.

Donte Tatum led the Hurricanes in scoring with 16 points and dished out four assists. In addition to Tatum and Whitley, Kevin Kone was also in double figures as he posted a double-double by scoring 13 points and hauling down 12 rebounds. Christian Koneman led the Bobcats in scoring with 17 points.

The Hurricanes (4-7, 0-3 PBC) are still looking for their first Peach Belt Conference win and will try to earn it when they head down to St. Augustine, FL on Wednesday, January 12 to take on the Saints of Flagler College. Tip-off is scheduled for 7:30 p.m.