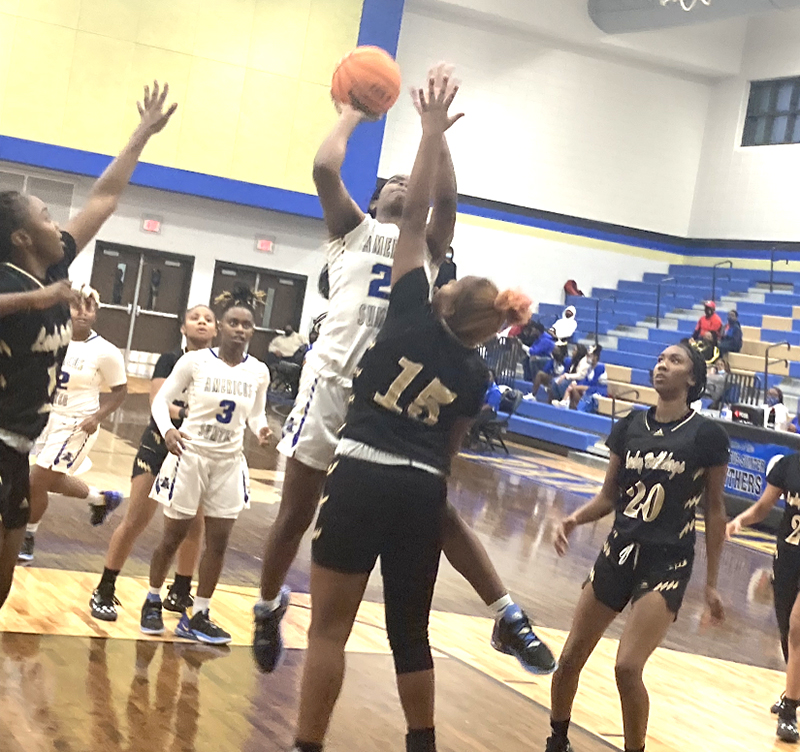 Sumter County senior center Trinity Jackson (#21) had a dominating performance in the paint for the Lady Panthers. Jackson scored 22 points in the win over Mary Persons. Photo by Coleman Price

AMERICUS – Sumter County senior center Trinity Jackson had one of the best performances of her career when she scored 22 points to lead the Lady Panthers to a 41-38 Region 2-AAA victory over Mary Persons (MPHS) on Tuesday, January 11 at Sumter County High School.

Junior small forward Haley Moore was also in double figures for SCHS. Moore scored 10 points on the night, including a key three-pointer in the fourth quarter, which proved to be the difference in the outcome.

While the performances of Jackson and Moore proved to be crucial in the Lady Panthers’ victory, SCHS Head Coach Sherri Harris said that the defensive play of her club late in the game was also key in getting the win.

“We made a few great team stops down the stretch. I thought we did a great job of toughing it out,” Harris said. 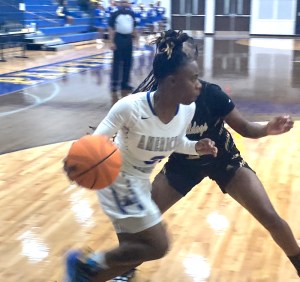 The first quarter was evenly played between both teams, but the Lady Bulldogs got hot in the second quarter as they outscored SCHS 15-11 to take a 26-19 lead at halftime.

However, the Lady Panthers came alive in the third quarter and outscored MPHS 12-8 to cut their deficit to 34-31 with one final quarter to play. In the fourth quarter, the Lady Panthers were able to use their defense to get several stops, which made it possible for them to edge out the Lady Bulldogs by three points in this hard-fought affair.

In addition to the double figures scoring from Jackson and Moore, junior guard Aviyonna Clemons chipped in seven points and freshman point guard Cornecia Luster chipped in two points in the winning cause.

While Harris was pleased with the win and with her club’s ability to play lock-down defense in the fourth quarter, she expressed her opinion that the Lady Panthers need to play this way during the entire game. “We also have to put four good quarters together, not one first quarter and then another halfway through the third,” Harris said. “Our role players have to stay consistent and be ready to play every night.”

With the win, SCHS improves its overall record to 10-6 and the Lady Panthers are now 6-0 in Region 2-AAA competition. MPHS falls to 10-6 overall and 3-3 in region play. The Lady Bulldogs were led in scoring by T.T. Brown’s nine points.

Up next for the Lady Panthers is an important region game against the Lady Chargers of Central (Macon) at home on Friday, January 14. CMHS comes into this game with a 12-3 overall record and is 6-1 in Region 2-AAA competition. Tip-off is scheduled for 6 p.m. SCHS will follow up the CMHS game with another region contest on Saturday, January 15 at Crisp County. Tip-off for that game is also scheduled for 6 p.m.