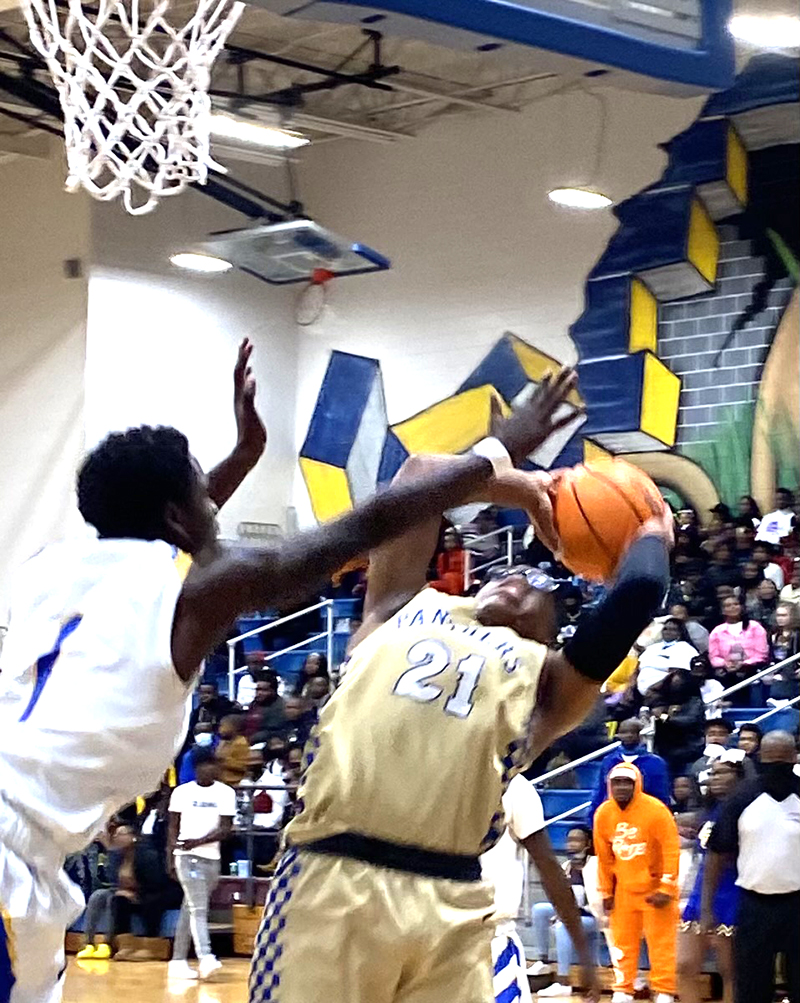 CORDELE – For most of the game, it was an exciting back-and-forth war between the Sumter County Panthers (SCHS) and the Crisp County Cougars (CC) in Act 1 of the “Battle of the Flint” at Crisp County High School on Saturday, January 15. However, a late 6-1 run in the fourth quarter by the Panthers that was spearheaded by junior guard Devon Dowdell led to SCHS taking control the rest of the way and securing a 72-59 victory.

With the win, the Panthers are now 19-1 overall and are in first place in the Region 2-AAA standings at 9-0.

Five players scored in double figures for SCHS. Both Dowdell and D.J. Hurley poured in 18 points to lead the SCHS offense and Cameron Evans scored 12. Kyric Davis scored 11 points and Brandon Pope chipped in 10 in the winning cause.

The Cougars were led in scoring by senior guard Eric Ivory, who led all scorers with 26 points and made six three-pointers. Jamarion Johnson was also a scoring machine for the Cougars as he poured in 22 points and drilled three shots from beyond the arc.

“It’s a rivalry game, so I told my guys to expect it to be a close game, with it being a rivalry game. They (CC) were going to come out and play,” SCHS Head Coach Johnny Genwright said. “We let them get a lot of shots in the first half, a lot of shots from #4 (Ivory) and #2 (Johnson) and they shot the ball well. In the second half, I told my guys that we are going to come out and really be aggressive and not let them get shots off. They did contain #4 (Ivory) and #2 (Johnson), but they got a lot of points from the free throw line, but my guys were able to execute and just close the game out,” Genwright continued. 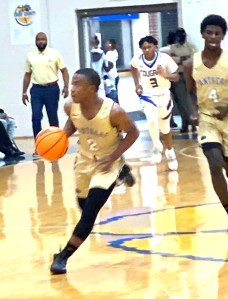 The Panthers jumped out to an 11-3 lead to start the game, but the Cougars responded with an 8-2 run of their own that was capped off by a three-pointer by Ivory. Over the next several minutes of the first half, both teams traded baskets, including three-pointers, but Cameron Evans was able to give SCHS a 20-18 lead with two free throws with a little over six minutes left before the half.

Over that remaining six minutes, however, the game was what one would expect from a heated rivalry. It was a back-and forth affair, with each team scoring on almost every possession.

With less than a minute to play before halftime, the Panthers had a 29-28 lead and were working the clock down for the last shot. Then with about two seconds left, Hurley was able to score on a short jumper to give SCHS a 31-28 lead at halftime.

Over the first five minutes of the third quarter, both teams traded baskets, but the Panthers went up 46-40 on a three-pointer by Dowdell, prompting a timeout by CC. 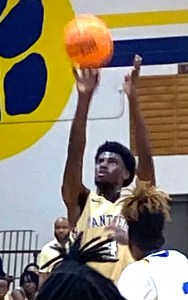 However, out of the timeout, the Cougars could not score and Dowdell drained another three-pointer to put the Panthers up by 11. Then as the time was running down on the third quarter, Hurley drove to the basket and scored as the horn sounded to give the Panthers a 55-45 lead with one more quarter to play.

In the first minute of the fourth quarter, Cameron Evans and Kyric Davis showed their chemistry once again as Evans threw an ally-oop pass into Davis, who threw down the two-handed slam. This exact play was done between the two the night before in the Panthers’ win over Central-Macon.

However, the Cougars went on a 9-2 run over the next two and a half minutes that was capped off by another three-pointer from Ivory, bringing CC to within five at 59-54.

The Panthers responded with a fast break basket by Dowdell and he would later score again on a reverse layup to give SCHS a 63-55 lead with a little over three minutes to play. Then with 2:34 to play, Hurley got fouled while driving to the basket and made both free throws, putting the Panthers up by double digits at 65-55.

CC tried to make a comeback in the last two minutes, but the Panthers were able to get defensive stops and knocked down foul shots to secure their hard-won 72-59 victory.

Up next for SCHS is another tough Region 2-AAA contest against Upson-Lee at home on Friday, January 21 at 7:30 p.m. Act II of basketball’s version of the Battle of Flint” between Sumter County and Crisp County will be at Sumter County High School on Saturday, February 5 at 7:30 p.m.