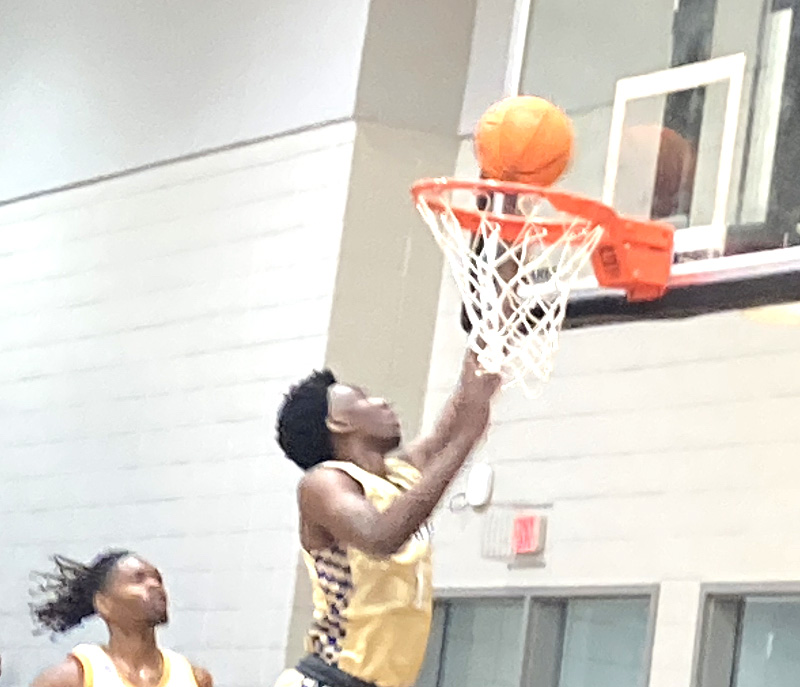 Sumter County senior Kyric Davis goes in for a layup. Davis led the Panthers with 18 points in the loss to Peach County. Photo by Coleman Price

FORT VALLEY – The Sumter County Varsity Boys Basketball Team (SCHS) made the trip up to Fort Valley on Saturday, January 22 expecting to continue their unbeaten streak in Region 2-AAA with a win over Peach County (PCH). However, in an otherwise evenly played contest, the Trojans out scored the Panthers 19-10 in the second quarter. That nine-point margin ended up being the final margin of victory for PCH as the Trojans handed SCHS a 63-54 defeat.

It’s the Panthers’ first region loss of the season (10-1) and they are now 19-2 overall on the season.
SCHS had three players score in double figures. Kyric Davis led the Panthers in scoring with 18 points, Brandon Pope poured in 14 and Cameron Evans chipped in 11 in the losing effort.
After one quarter of play, SCHS only trailed 14-13, but the Trojans went on a run in the second quarter and took a 33-23 lead at halftime. 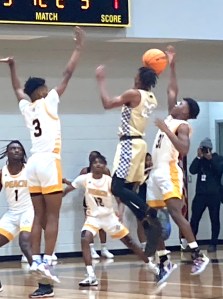 Sumter County junior forward Brandon Pope goes up for a rebound against Peach County. Pope scored 14 points in the loss to the Trojans.
Photo by Coleman Price

The second half was an evenly played affair and the Panthers actually out scored PCH 15-13 in the fourth quarter, but they could not cut into that deficit that was created by the Trojans in the second quarter, when they outscored SCHS 19-10.

The Panthers will try to rebound from this bump in the road and get themselves back on track when they host Tift County in a non-region game on Friday, January 28 at 7:30 p.m.