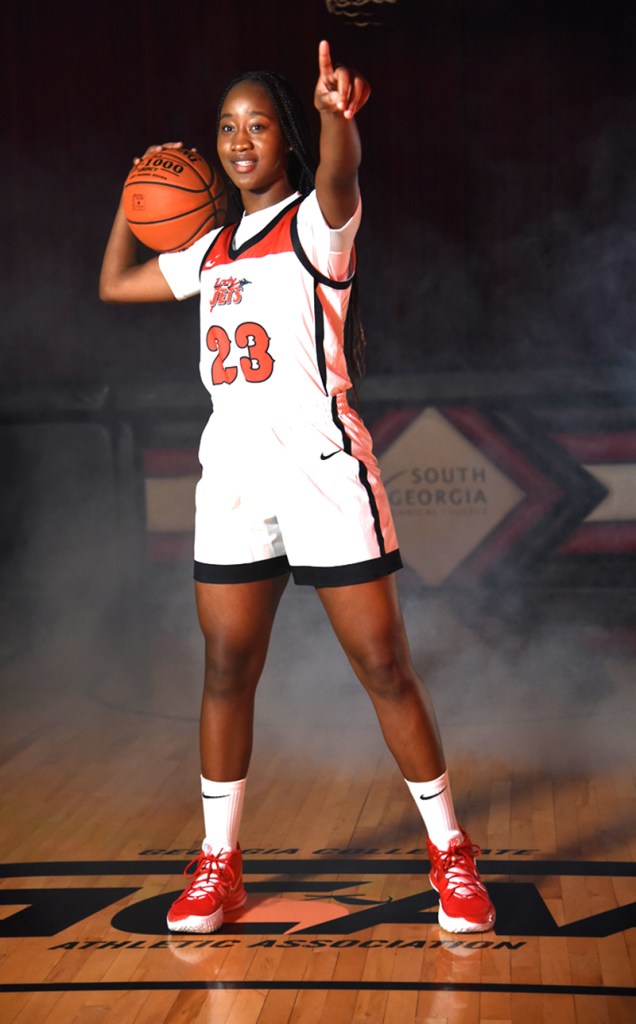 SGTC freshman forward Fanta Gassama (#23) led the Lady Jets in scoring and rebounding with a double-double night against Central Georgia Tech. Gassama had 20 points and 10 rebounds against the Lady Titans. Photo by SGTC Athletics

“We had a really good start to the game and seemed to have a good flow offensively. I thought we were really aggressive and then we started getting fouls called on us and it changed the way we had to play,” SGTC Head Coach James Frey said. “I think it completely took our aggressiveness away and made us play more passive. We had two players to foul out and three more with four fouls. We weren’t able to play our game and it was very frustrating on the players and me as their coach. This is the first time this year we’ve had a game called that way. It took us over two hours to play because of so many whistles,” Frey explained. “Hopefully, we will learn from it and grow. I am thankful we were able to get out of there with a win. I am really looking forward to playing them at home on February 5.”

The Lady Jets jumped out to a 16 – 11 lead at the end of the first quarter and stretched that lead to 29 – 23 at the half. The Lady Jets were able to pull ahead 50 – 41 at the end of the third quarter but the Lady Titans rallied in the fourth to outscore South Georgia Tech 21 – 15 and pull within three points at the final buzzer.

Freshman center Fanta Gassama led the Lady Jets in scoring with 20 points and 10 rebounds for another double-double effort.  She was followed by sophomore shooting guard Kamya Hollingshed who was the only other Lady Jet in double-figures with 13 points.

Freshman Alexia Dizeko and Camryn James both contributed nine points, sophomore guard Maikya Simmons scored seven, Loes Rozing had four and Luana Leite closed out the scoring with three.  The Lady Jets hit 40% of their shots from the field, only 21% of their three-point attempts and 73% of their free throws.

The Lady Jets will travel to Cuthbert to take on Andrew College on Friday at 1 p.m. and then Coach Frey is hoping to schedule an additional game on Sunday, January 30th to replace the cancelled game against South Crescent.  They will also be hosting the league leading Georgia Highlands and former coach Brandon Harrell on Wednesday, February 2nd at 5:30 p.m. in the Hangar.

The Jets will be in action today, Wednesday, January 26th at 7 p.m. in Cuthbert in a conference match-up against Andrew College.  They will return home on Saturday, January 29 at 3 p.m. to take on former Jets basketball coach Travis Garrett and East Georgia College.

Both teams will be in the Hangar on Saturday, February 5 at 1 p.m. and 3 p.m. for Sophomore Day and the 20th anniversary of the Jets basketball program. A special recognition of the first Jets team and former players will be held during the half-time of the Lady Jets game around 1:30 p.m. and then each of the Jets and Lady Jets sophomore players will be recognized in-between the Lady Jets and Jets game around 2:15 p.m. The Lady Jets play Central Georgia Tech at 1 p.m. and the Jets play Southern Crescent Technical College at 3 p.m. The Americus and Sumter County Chamber of Commerce will be hosting a tailgate event at 12 noon for all alumni, students, faculty, staff, and community members in honor of the 20th anniversary celebration and sophomore day.