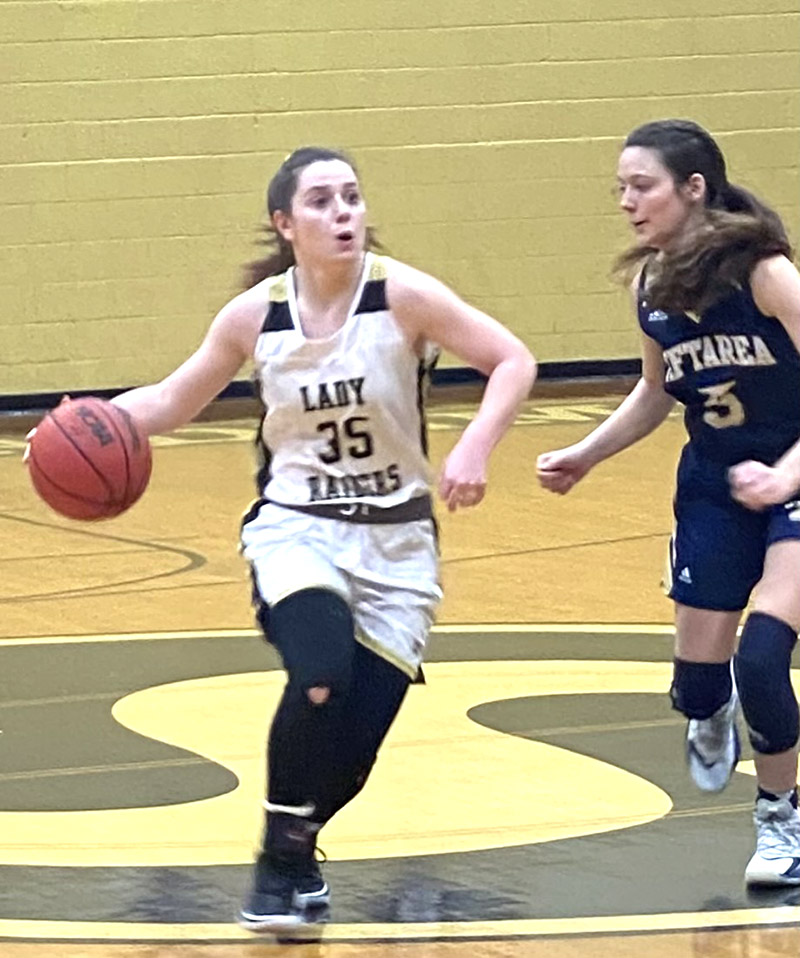 AMERICUS – Up until the last two and a half minutes of the game, it appeared that the Southland Lady Raiders (SAR) were not going to overcome their struggles on offense as they struggled to score for most of the game. However, trailing 32-25 with 2:24 to go, through defensive pressure and clutch shooting, including a three-pointer by J.C. Bailey to tie the game, the Lady Raiders were able to pull off a 34-32 come from-behind victory over a strong Tiftarea Academy squad (TA).

This was a crucial victory for the Lady Raiders in that it vaulted them into a second place finish in the Georgia Independent School Association (GISA) Region 3-AAA standings. With the loss, the Panthers drop to 10-5 overall and have secured third place finish in the region with a 2-3 record.

“We had so many girls step up tonight,” SAR Head Coach Eric Israel said. “We faced adversity for the whole game really and we had some girls really step up on the offensive and defensive end and we just made some huge shots down the stretch and huge plays.” 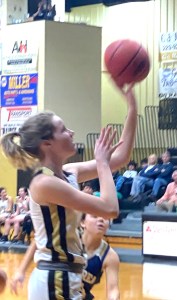 Both Riley Mitchell and Mary Beth Easterlin led the Lady Raiders in scoring with 11 points and J.C. Bailey scored six on two three-pointers in the fourth quarter. Morgan Weaver scored five points and Jadie Burell made one free throw to round out the SAR scoring. 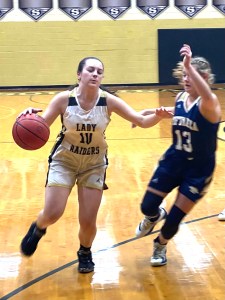 The Panthers jumped out to a 6-2 lead to start the game on the strength of three-pointers by Elli Bryan and Jolee Paulk, but the Lady Raiders responded with a 5-3 run to close out the first quarter. With four seconds left in the quarter, Mitchell was fouled while trying to get off a desperation three-pointer at the buzzer. She made two of the three foul shots and the Lady Raiders only trailed 9-7 by the end of the first quarter.

Little did anyone know at the time how huge that play and those free throws would be in affecting the game’s outcome.

Over the first four minutes of the second quarter, however, the Panthers went on a 6-1 run to take a 15-8 lead. During this period of the game, the Lady Raiders tried to be patient on offense and moved the ball around the perimeter to try and find the best shot. Unfortunately for SAR, they struggled to find that good shot due to the solid half court man-to-man defense of TA. The Lady Raiders also struggled with turnovers in the second quarter. These things eventually led to a 17-8 halftime lead for the Panthers.

During the first three and a half minutes of the third quarter, both teams traded baskets, but the Lady Raiders were not able to cut into the Panthers’ lead. After watching TA’s Grace Odom receive a pass and score on a layup, Israel called a timeout with 4:40 to go in the third to get his team to regroup. 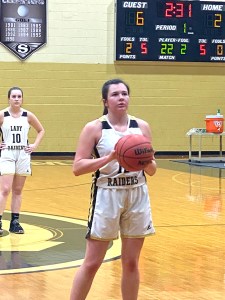 However, out of the timeout, TA increased its lead to 25-15 when Odom was fouled in the act of shooting and made both free throws. Mary Beth Easterlin was able to make one of two foul shots to cut SAR’s deficit to nine at 25-16, but during the final two minutes of the third quarter, both teams struggled to score. Fortunately for the Lady Raiders, Mitchell was able to knock down a three-pointer with about four seconds left to keep SAR within striking distance as the Lady Raiders trailed 25-19 with one more quarter to play.

Over the first couple of minutes of the fourth quarter, the Lady Raiders showed signs that they were ready to make a run. With 6:04 left in the game, J.C. Bailey drilled a three-pointer to bring SAR to within five at 27-22. This prompted TA to call a timeout at that point. Out of the timeout, Easterlin made one of two foul shots after being fouled and SAR was within four, but the Panthers responded with a three-pointer from Jolee Paulk to put themselves up 32-25.

However, Mitchell responded for the Lady Raiders by making two foul shots and Easterlin would later drain a baseline jumper to bring SAR to within three with 2:24 left. SAR then forced a turnover and tried to work for the good shot on its next possession, but used up a lot of time in the process, forcing Israel to call a timeout with 1:21 to go. 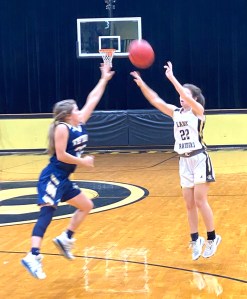 Out of the timeout, J.C. Bailey tied the game on a three-pointer and the Lady Raiders forced another turnover. With 1:03 to go in the game, SAR was wide-awake, having erased a seven-point deficit in a short period of time.

On the Lady Raiders’ next possession, Easterlin was fouled while shooting and made one of two foul shots to give SAR a 33-32 lead, its first lead of the game. The Panthers tried to retake the lead with under a minute left, but turned the ball over on a double dribble.

However, the Lady Raiders returned the favor with a turnover and the Panthers called a timeout with 16.6 seconds left to set up a play to win the game.

However, the Lady Raiders forced a turnover when Morgan Weaver came up with a steal and was fouled with 3.6 seconds left. After making her first free throw, she missed the second one, but the Panthers were not able to get a shot off and SAR celebrated a 34-32 come-from-behind victory.

Odom led TA with eight points and both Paulk and Shelby Whitefield scored six for the Panthers in the losing cause.

The Lady Raiders will try to build on their two game winning streak when they host Brookwood on Friday, January 28 at 6:30 p.m.