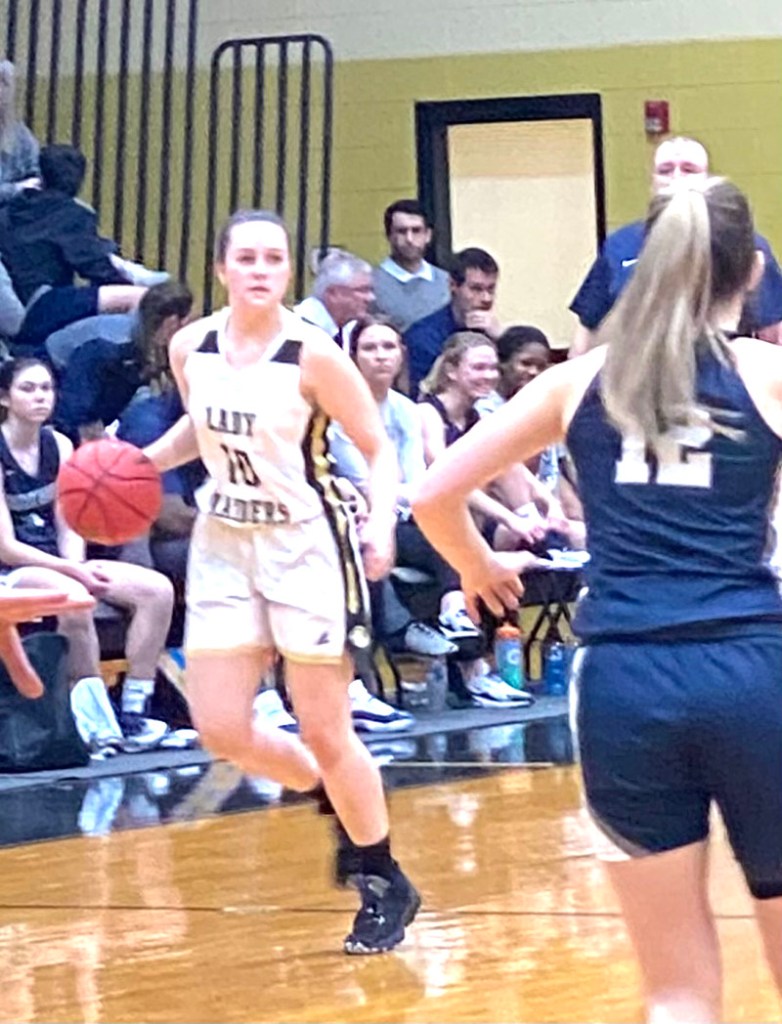 AMERICUS – For several years, the main principle for winning basketball under former Southland Academy (SAR) Girls’ Basketball Coach Ty Kinslow was “It starts with defense”. That principle led the Lady Raiders to a GISA Class AAA state championship a year ago. Under current SAR Head Coach Eric Israel, that principle has not changed one bit. A year ago, it led to a state title, but on Friday night, January 28, the Lady Raiders’ “defense first” principle led SAR to a 44-39 overtime victory over the Lady Warriors of Brookwood (BWS). The Lady Raiders got a crucial basket from Mary Beth Easterlin with 1:45 to go in the overtime session, but according to Israel, SAR’s team defense throughout regulation and during the extra session was the key factor in SAR’s victory.

“Our defense was once again unbelievable,” Israel said. “You know that’s what we hang our hat on every night. Our defense kept us in it in the first half and in that second half, we kept playing our solid pack line D and finally knocked down some shots and it put us over the edge. I couldn’t be more proud of the girls for all the hard work they put in the entire season and especially this week. All the game planning that went into this game, they took it to the floor and executed perfectly. It’s a huge credit to those girls.” 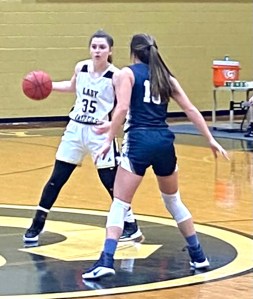 SAR had two plays score in double figures. Morgan Weaver led the Lady Raiders in scoring with 14 points and J.C. Bailey poured in 11, with five of those points coming in the fourth quarter. Jadie Burrell scored eight points and Mary Beth Easterlin chipped in six in the winning cause.

The Lady Warriors jumped out to a 7-3 lead to start the game, but Weaver drilled two back-to-back jump shots to tie the game for the Lady Raiders. However, BWS responded by going on a 5-0 run to close out the first quarter and led 12-7.

Throughout the first quarter and during the rest of the first half, SAR struggled to score. They tried to be patient on offense by swinging the ball around the perimeter to try and find the high-percentage shot, but they weren’t able to penetrate the defense of the Lady Warriors and they struggled to hit outside shots. Another reason SAR was struggling to put points on the board was due to the fact that they were being outrebounded on both ends of the floor.

While the Lady Raiders struggled to score, BWS was able to jump out to a 17-11 lead and would later increase it to 20-11 with a three-pointer from Rayne Deese. By halftime, the Lady Raiders trailed 20-12. 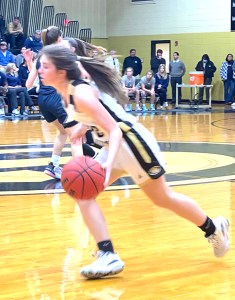 During the first two minutes of the second half, both teams traded baskets, but JC Bailey brought the Lady Raiders within four points at 24-20 with a three-pointer. Shortly thereafter, Morgan Weaver drained a three-pointer and SAR was back in it, trailing 24-23 with a little over five minutes to go in the third quarter.

Then with about four minutes to go in the third, Bailey struck again with another three-pointer to give the Lady Raiders the lead at 26-24. SAR had been down 24-17 at one point and responded with nine unanswered points on three shots from beyond the arc. Over the last couple of minutes of the third quarter, both teams traded baskets, but though BWS had a 29-28 lead with one more quarter to play, the Lady Raiders had clearly recovered from their first half struggles.

Over the first two and a half minutes of the fourth quarter, both teams traded baskets, but the Lady Warriors were able to jump out to a 36-30 lead. However, SAR struck back when Weaver scored and was fouled. Weaver sank the free throw to complete the three-point play and the Lady Raiders were back within three at 36-33 with 4:27 to play.

After a timeout, the Lady Raiders tied the game on a basket from Riley Mitchell and a made free throw by Bailey. This was going to be a game that would go down to the wire and would be decided by the team that could make the crucial play and avoid the crucial mistake.

BWS took a 38-36 lead when Eliza Eiford was fouled on a three-point attempt and made two of the three foul shots, but with 1:02 to play, the Lady Raiders had the ball and were trying to work for the good shot before Israel called a timeout so his team could regroup on offense.

Out of the timeout, the Lady Raiders continued to work for the good shot and their patience paid off when Bailey drove down the lane and scored to tie the game at 38-38 with 16.1 seconds left. It was now the Lady Warriors’ turn to find a winner in regulation.

After a timeout called by BWS, the Lady Warriors moved the ball across mid court before they called another timeout to set up a game-winning shot. Out of that timeout, BWS forward Ella Grace Squires took a shot with about eight seconds left that was missed, allowing the Lady Raiders one last desperation attempt to win the game in regulation. Mitchell heaved the ball from half court at the buzzer, but it hit the backboard and bounced off the rim. This low-scoring, hard-fought contest would have to be decided in overtime.

During the first minute of overtime, both teams struggled to score as both were playing solid defense. However, with 1:45 to play, Mary Beth Easterlin scored to give SAR a 40-38 lead. The Lady Raiders were then able to get a stop on defense and got the ball back with 1:19 to play in overtime before Israel called a timeout.

However, out of the timeout, Mitchell received the ball in the backcourt, which resulted in a turnover. The Lady Warriors were able to cut the SAR lead to one on a free throw and Mitchell had a chance to extend the SAR lead, but she missed the front end of a one-and-one. Fortunately for SAR, the Lady Warriors weren’t able to capitalize and thanks to made foul shots by Mitchell and Weaver in the closing seconds, the Lady Raiders were able to salt away a hard-earned 44-39 overtime victory.

Rayne Deese led BWS in scoring with 14 points and Ella Grace Squires chipped in nine for the Lady Warriors in the losing cause.

Up next for the Lady Raiders is a home contest against Terrell Academy on Monday, January 31 at 6:30 p.m.