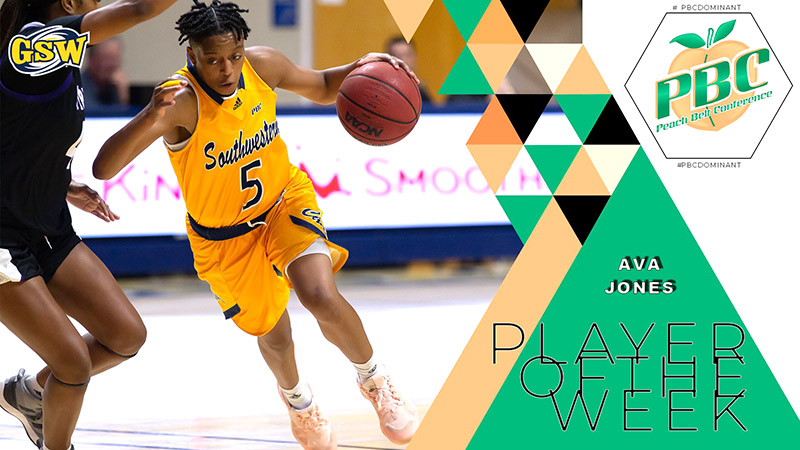 GSW junior guard Ava Jones (5) has been named the Peach Belt Conference Player of the Week for her performances on the court for the Lady Hurricanes during the week of 1/23 to 1/29. Photo by GSW Athletics

AMERICUS – Georgia Southwestern State University (GSW) junior guard Ava Jones was selected as the Peach Belt Conference’s women’s basketball Player of the Week. Jones is just the second GSW women’s player to be named for the honor since 2012 and the fourth recipient overall for the Lady Hurricanes.

Jones led GSW to three wins last week and averaged 20 points per game. The Carencro, L.A. native capped the week off with a 24-point game against Young Harris College on Saturday, January 29.

Jones shot 53 percent from the field with 4.33 rebounds and 4.0 assists per game. She scored 22 with six boards against Columbus State in a win and 24 with eight assists against Young Harris. The 24 points are tied for the fourth-highest single-game total in the PBC this year and the eight assists tied for third-most. On the defensive end, Jones had 4.3 steals in the three games over the week. Jones is currently ranked fifth in the PBC in scoring, second in field goal percentage, fourth in free throw percentage and third in steals.

On the season, Jones has two of the top five highest single-game point totals with 33 against conference leader North Georgia on Jan. 5th, the most this season, and 24 this week against Young Harris, which is fifth in the Peach Belt Conference.