Raiders suffer first loss of the season against Terrell Academy 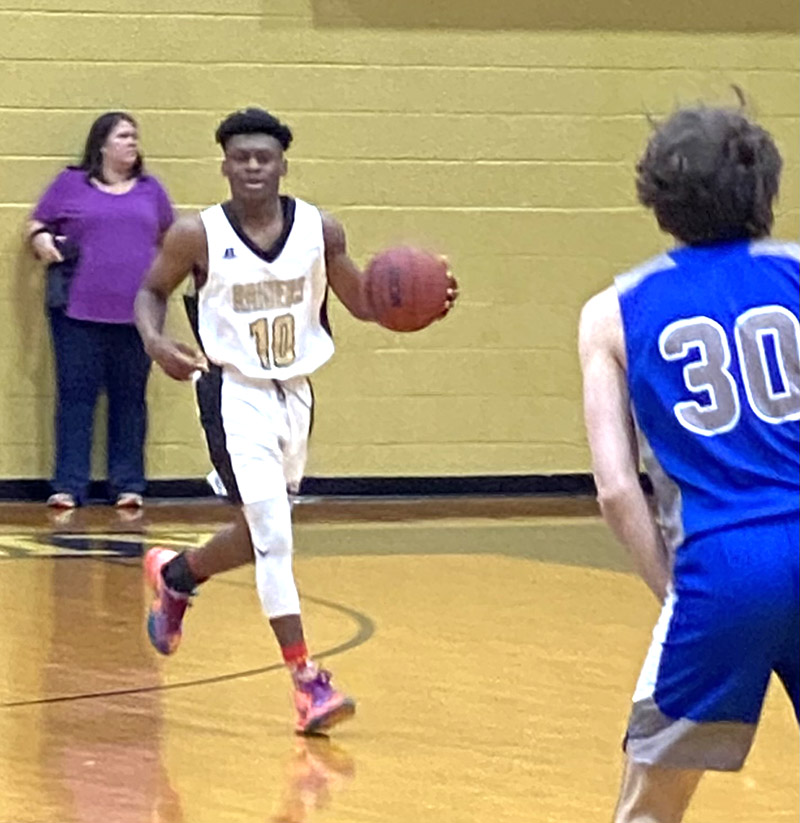 AMERICUS – The atmosphere inside Melvin Kinslow Gymnasium on Monday night, January 31, was like that of a state championship game. The undefeated Southland Academy Raiders (SAR) were putting their undefeated streak on the line against their rivals from Dawson, the Eagles of Terrell Academy (TA), in front of a loud, raucous crowd. The game was a fiercely contested, low-scoring affair throughout, but with one quarter to play, SAR had a 24-15 lead. However, things changed in the fourth quarter as the Eagles outscored the Raiders 14-5 and tied the game at 29-29 on a running one hander from Sherod Pittman. Then in the overtime session, TA made enough plays down the stretch to end SAR’s unbeaten streak with a 37-33 victory over the Raiders.

With the loss, the Raiders are 18-1 on the season with two more regular season games remaining before the Georgia Independent School Association (GISA) Region 3-AAA Tournament at the GSW Storm Dome February 8-11.

Buddy Brady led the Raiders in scoring with 10 points and Carmelo Volley had nine. Both Cedric Smith and Carlos Tyson scored six points and John Henry Crisp chipped in two points in the losing cause.

Southland Academy senior forward Buddy Brady (15) goes up for a rebound against Terrell Academy. Brady led the Raiders with 10 points in the loss to the Eagles.
Photo by Ken Gustafson

In the first quarter, it was a tightly contested defensive affair between the two rivals. Both teams forced each other into committing turnovers and both teams struggled to score, but later in the quarter, the Raiders went on a 5-0 run that was capped off by a three-pointer from Brady to give SAR a 7-4 lead by the end of the quarter.

The Raiders were able to extend their lead to 10-4 early in the second quarter when Carmelo Volley scored, was fouled and made the free throw to complete the three-point play.

However, the Eagles answered with a 4-0 run that was capped off by a baseline jumper by Queri Mitchell and would later take an 11-10 lead on a basket from Mathew Todd.

During this period of the game, the Raiders tried to be patient on offense, but were going through a scoring drought. That drought finally ended when Volley grabbed an offensive rebound and banked in a shot with 17 seconds left to give SAR a 12-11 lead at halftime. 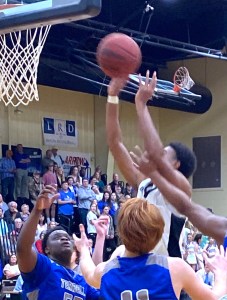 Throughout the first half, both teams played tenaciously on the defensive end, but it made for a low-scoring affair as both teams struggled to score on the inside and from the outside. The Eagles, in particular, had numerous chances in the first half to extend their lead, but they missed several easy bunnies on the inside, which enabled the Raiders to have the lead at halftime.

Over the first five minutes of the third quarter, the Raiders found their stride offensively. They went on a 10-3 run that was capped off by a basket from Volley. This prompted TA Head Coach Robert Bryant to call a timeout with 2:43 to go in the third. However, that timeout didn’t stop SAR, as Cedric Smith would bury a jumper to give the Raiders a 24-14 lead.

During this period of the game, the SAR half court defense continued to be solid, making it difficult for the Eagles to score on dribble penetration. TA was also struggling to hit outside shots, which made it even more difficult for the boys from Dawson. As a result, the Raiders finished the third quarter with a 24-15 lead and seemed to have the game under control.

Early in the fourth quarter, the Raiders were patient on offense, as they had been all throughout the game. They quickly but patiently moved the ball around the perimeter until John Henry Crisp found an opening and drove his way to the basket for a layup. However, TA wasn’t going away as Nick Chambless drilled a three-pointer from the top of the key, prompting SAR Head Coach Rundy Foster to call a timeout.

That three pointer seemed to wake up the Eagles’ offense, as they would later cut the Raiders’ lead to 29-23. Then with 2:34 to play, Chambless got fouled and made two foul shots, cutting TA’s deficit to just four. Momentum seemed to be shifting in favor of the Eagles and it prompted Foster to call another timeout with 1:34 to play. 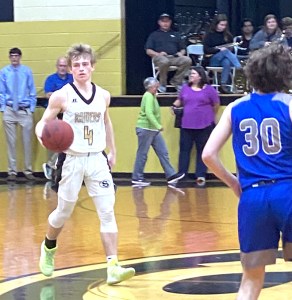 Out of that timeout, the Raiders had the ball and were about to run their half court offense, but Foster, seeing something he didn’t like, called another timeout with 1:22 to play. Having been in control for most of the game, SAR was not about to let it slip away.

With 1:12 to play, the Raiders had the ball and Crisp was fouled in the act of shooting. However, he missed both foul shots and Sherod Pittman responded with a basket for the Eagles, cutting the SAR lead to 29-27.

On the Raiders’ next possession, they tried to milk the clock as much as they could before Smith was fouled with 15.1 seconds left. However, Smith missed the front end of a one-and-one and the Eagles would have a chance to tie or take the lead. Right before the horn sounded to end regulation, Pittman hit a running one hander to tie the game at 29-29, sending it into overtime. Poor free throw shooting in the fourth quarter proved costly for the Raiders, as they went 0 for 5 in the final period of regulation.

Early in the extra session, the Eagles took the lead, but Smith got a steal for SAR and tied the game when he drove coast to coast for a layup. However, TA took a 32-31 lead when Queri Mitchell was fouled and made one of the two foul shots with a little over two minutes left in overtime. SAR’s perfect, undefeated season was hanging in the balance.

After a timeout by the Raiders, Smith was able to score on the inside to give SAR a 33-32 lead, but TA regained the lead when Luke Addison tipped in a missed shot with a little over a minute left. SAR then turned the ball over on its next possession and the Eagles had a chance to extend their lead with less than a minute to play, but Bryant decided to call a timeout with 58.2 seconds left to come up with a high percentage scoring play.

Out of the timeout, the Raiders allowed several seconds to elapse before fouling Chambless with 16.6 seconds left. Chambless made both foul shots, but the Raiders would have one last chance to tie the game and keep their undefeated streak alive.

However, Crisp’s three-point attempt with five seconds left fell short and the Eagles got the rebound. Luke Addison was fouled with 1.3 seconds left and made one of the foul shots to secure TA’s 37-33 win, thus ending the Raiders’ undefeated streak.

Chambless led the Eagles in scoring with 12 points, including two three-pointers in the fourth quarter. Luke Addison scored eight points and Matthew Todd scored six points in the winning cause.

The Raiders will not have long to think about what might have been, as they will host Westwood on Tuesday, February 1 at 8 p.m. It will be Senior Night at Southland Academy and seniors Carmelo Volley, Hudson Collins and Buddy Brady will be honored for their accomplishments during the past four years.