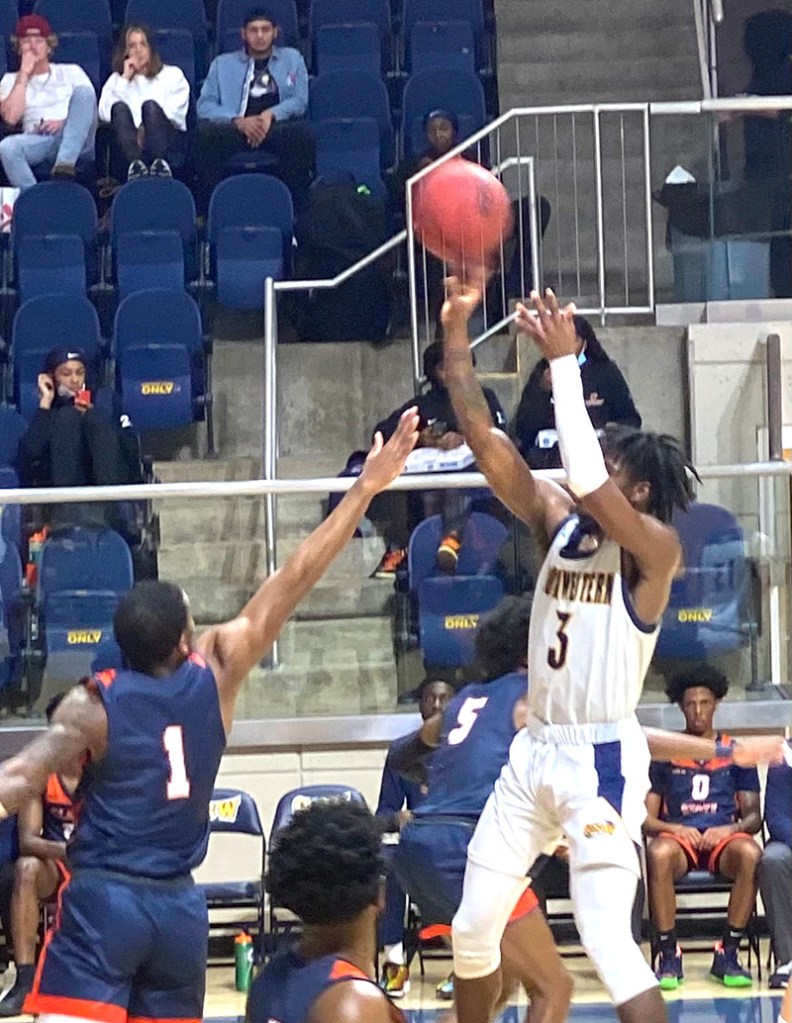 GSW freshman guard Jarrett Adderton (3) drained a three-pointer with 34 seconds to go in regulation to ensure a 66-62 victory for the Hurricanes over Clayton State. Adderton scored a total of 15 points in the contest. Photo by Ken Gustafson

AMERICUS — The Georgia Southwestern State Men’s Basketball Team (GSW) defeated Clayton State 66-62 Wednesday evening, February 2 at the Storm Dome for its fifth Peach Belt Conference win on the season. The deciding play of the game took place with 34 seconds left in regulation, when GSW freshman guard Jarrett Adderton hit a three-pointer that gave the Hurricanes the lead for good.

“Anytime we win, it’s a great win. I don’t care how it is,” GSW Head Coach Aaron Coombs said. “Unfortunately the way we play, we’re going to be in a lot of those nail biters, but give credit to my guys. They sustained several runs from Clayton State. They showed a lot of toughness. I love that we played with only 10 turnovers. We outrebounded them. Those are things that we talked about as our achillese heel throughout the year. That’s now four out of the last five games we’ve outrebounded our opponent.”

It was Pajama Night at the Storm Dome and many GSW students came out to the game wearing pajamas.

The Hurricanes spread the ball out well in the first half with two players, Devon Higgs and Adderton, having eight points apiece, along with both Kevin Kone and Kahlon Whitley right behind them with seven points each in the first half. Turnovers were an issue for the Lakers as GSW forced nine of them in the first half, while only having four turnovers themselves. Both teams struggled from three, shooting under 23% from beyond the arc. The Hurricanes led by six at the half hoping to finish the first game of their four-game home stand with a win. 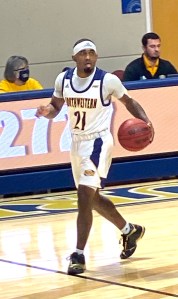 The second half was a battle of the big man as both Kone and the Lakers’ Jalen Shaw traded buckets back and forth for the final 20 minutes. Both big men led their teams in points with 11, with Kone adding eight rebounds in the process.

The Lakers went on many scoring runs during the second half and GSW was able to hold on for each one, either matching with a run themselves or answering their scoring every possession. For the second time in three games, Adderton hit a clutch three-point jump shot and gave the Hurricanes a three-point lead with just 34 seconds left. A final forced turnover put the final dagger into the Lakers’ comeback chances and the Hurricanes got their fourth win in their last five games.

Kone posted a double-double in this game to lead the Hurricanes. The junior forward from Paris, France scored 18 points and grabbed 16 rebounds. Adderton poured in 15 points and Higgs chipped in 11 for GSW in the winning cause.

GSW (8-11, 4-7 PBC) will host North Georgia on Saturday night on homecoming for their second matchup with the Nighthawks this season. Tip-off is scheduled for 3:30 p.m.