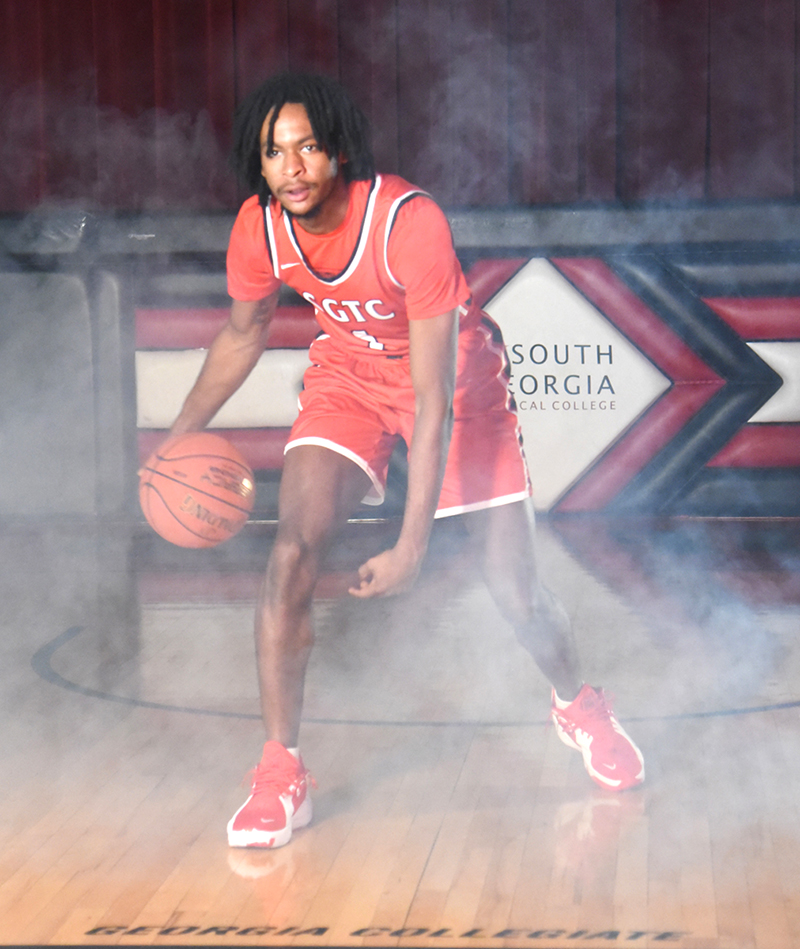 Malik Battle (1) led the Jets in scoring with 18 points in a narrow loss to South Georgia State College. Photo by SGTC Athletics

The Jets jumped out to an early lead against the Hawks and were up 36 – 25 at the end of the first half.  They held on to the lead until the final seven minutes of the second half.  The Hawks were trailing 58 – 57 until Nick Giles hit a three pointer to lift the Hawks to a 60 – 58 lead with 7:13 on the clock.  From that point on, the lead bounced back and forth until the game was tied at 71 – 71 with 35 seconds remaining.

A Jets turnover allowed the Hawks to score and go up 73 – 71 with four seconds remaining.  The Jets tried to inbound the ball and get a quick shot off but they were unsuccessful and the South Georgia State Hawks took the narrow win to move to 7 – 2 in the conference behind Georgia Highlands, who is in first place with a 7 – 1 record.  Albany Tech and South Georgia Tech are currently tied for third place with identical 5 – 4 GCAA records.  The Jets are currently 13 – 10 on the season.

The Jets had four players in double-digits.  Sophomore Malik Battle was the top scorer with 18 points, five rebounds and one assist.  Sophomore guard Will Johnston was close behind with 16 points.  Sophomore center Jalen Reynolds had another double-double performance with 14 points and 10 rebounds.  He also had two assists and one steal.

The return home on Saturday, February 5th for the Alumni/Sophomore Day celebration in the James S. Peters gymnasium and their observance of the 20th anniversary of the Jets basketball team.  They will play Southern Crescent Tech at 3 p.m.  The Lady Jets will open at 1 p.m. against Central Georgia Tech.  A tailgate will be hosted by the Americus-Sumter County Chamber of Commerce with free hotdogs and hamburgers beginning at 12:15 p.m.