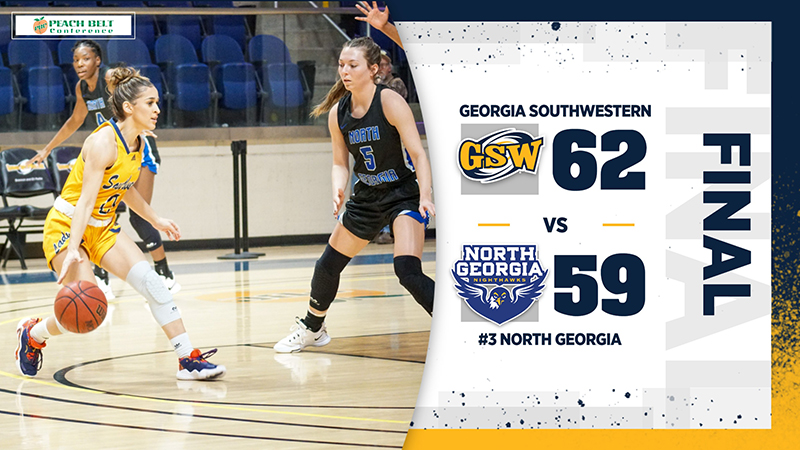 AMERICUS – The Georgia Southwestern State women’s basketball team toppled third-ranked North Georgia 62-59 on Saturday afternoon at the Storm Dome. With the win, GSW improves to 18-3 over all and 10-2 in the Peach Belt Conference.

The Nighthawks and Hurricanes were tied at 22 after the first quarter, with Ava Jones taking over early with ten points in just the first quarter. In the second quarter, the two teams began to find ways to limit the opposing teams’ offense the Lady Canes outscored North Georgia 12-10 in the second to enter the halftime break up two points.

North Georgia came out quickly in the third quarter, scoring 10 of the first 12 points in the second half to take the advantage. They jumped out to a 10 point lead in the third and looked to be cruising to their 12th straight win and continue to be undefeated in Peach Belt Conference play.

UNG stretched the lead out to 10 on three occasions, the last time with eight minutes to play with the score at 57-47. With their backs against the wall, the Lady Canes did what they’ve done multiple times this season and fought their way back into the game. The Hurricanes finished the game on a 15-2 run holding the UNG to just seven points in the fourth quarter to defeat the third-ranked team in the country and get their first ranked win this season.

The Lady Canes are now 18-3 and are one game out of first place in the Peach Belt. That is the best start in program history and tied for the most wins in the NCAA era. The Lady Canes have a quick turnaround when they face Augusta University on Monday night in the Storm Dome.