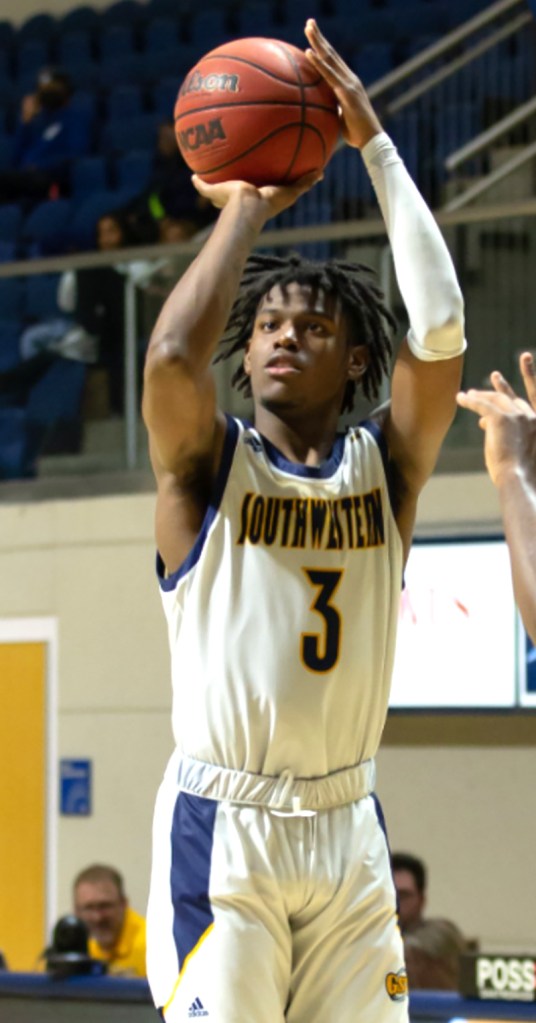 GSW freshman guard Jarrett Adderton (3) scored 27 points and grabbed 10 rebounds for a double-double in the Hurricanes’ 69-54 victory over North Georgia. For his performance, Adderton was named the Gyro City Player of the Game. Photo by GSW Athletics

AMERICUS – The Georgia Southwestern State men’s basketball team (GSW) defeated North Georgia 69-54 Saturday afternoon at the Storm Dome. This was the second matchup between the two schools this season. The Hurricanes started the game with an 11-0 run and held the Nighthawks under double digits until the six-minute mark of the first half. North Georgia ended the first half with a full-court buzzer-beater to get to 18 points in the first half, a season-low for the Nighthawks.

The second half began better for North Georgia offensively scoring cutting the 13- point halftime lead to seven early on in the second quarter. The Hurricanes came alive and matched the North Georgia run never looking back from there. Jarrett Adderton was on fire in the second scoring 19 of the team’s 28 second-half points. Adderton also scored ten straight points for the Hurricanes in the second half. He finished with 27 points overall and 10 rebounds, earning him Gyro City Player of the Game honors.