Agnes “Aggie” Crump passed away peacefully on February 6, 2022 in Americus, GA. She was
99.
A memorial service will be held on Saturday February 12 at 10 am at Calvary Episcopal Church
in Americus, Georgia. Subsequently, Graveside services will be held at Rose Hill Cemetery in
Macon Georgia at 1 pm.
Born Agnes Curtis Grace in Macon in 1923, she was the middle daughter of Walter Jasper
Grace and Ruth Squire Grace. She attended Hollins College from 1940-1944, graduating with a
BA in Biology. After the war, she married William Day Krenson of Macon with whom she had
three children. After living in New Orleans LA, the family to Atlanta in 1956 where she lived until
1982. She obtained a Masters of Education from Georgia State University and taught in the
Atlanta Public Schools for more than 10 years. She was a great reader and tireless educator,
with stories as to how she would “inspire” students to read. She was a member of the Junior
League in Atlanta, the Iris Garden Club in Atlanta and the National Society of Colonial Dames of
America. Her children will attest to her perpetual lateness and her interest in doing something
nice for everyone and anyone; in social context she loved to host her friends and family. She
was a member of St. Anne’s Episcopal Church in Atlanta. She has 7 direct grandchildren and
one great grandchild through them.
After being widowed in 1978, she subsequently married Joseph Riley Crump of Houston Texas
in 1982 and she then moved to Houston. She became like a second mother of the Crump
Children, her second family, including David L. Crump, Stephen W. Crump, John J. Crump,
James G. Crump and Ruth (Missy) G. Crump. They include in this second family 11
grandchildren and 8 great grandchildren. While in Houston, she was a member of the Junior
League and became a patron of the Arts as well, endowing the first trumpet Chair of the
Houston Symphony Orchestra and becoming a supporter of the Shepherd School of Music at

Rice University. She continued her teaching as a volunteer in public Schools (VIPS). Her
church in Houston was St. John the Divine Episcopalian Church.
A lifetime of travel became a real focus while in Houston. As a young person, she spent
summers at Rockbrook Camp and Camp Kanuga in Hendersonville, the Episcopalian retreat;
she later returned often. In the 1980s she began a series of visits to Europe where she rented
villas for a month and invited numerous friends and family to visit. In between she sprinkled in
shorter trips such as to China, Egypt, the Galapagos, London and Sicily. She was always a
great believer that such travel would open one’s mind to a greater understanding of the world.
Widowed again in 1993, she remained in Houston until 1999 with the Crump family. Thereupon
she moved to Americus Georgia and got involved with her grandchildren there, the Krensons
and the Cornwells. She continued her volunteer efforts in the Public Schools, in Americus.
While helping to care for these, her “third family”, she continued her travels. For her 95 th
birthday, she was feted on a Caribbean Cruise, while on her 96 th , her children took her to
Wakulla Springs, Florida. While COVID “rained on her parade” a bit, for her 99 th birthday she
hosted a ZOOM call with 35 admirers from all over the USA and the world. She was amazed!
She was widely known by a series of nicknames, including Aggie, Ghia, Gaggie and AuntAg.
She is survived by her children William D. Krenson Jr. (Meda Dubose Krenson) of Americus,
Frederick C Krenson (Jane Ann Krenson) of Atlanta, and Leonora Krenson Cornwell (Ralph L
Cornwell Jr.) of Americus; and Grandchildren Will Krenson, Eddie Krenson, Joseph Cornwell,
Walter Cornwell, Jennifer Gwaltney, Morgan Krenson and Campbell Krenson; we will all miss
her mightily. While some knew her as “A real sweet southern spitfire”, She was one of those
rarest of people, when she walked into the room, your heart kindof lighted up inside.
To read more about her or sign our guestbook and express your condolences to the family,
please visit www.hancockfuneralhomeinc.com. No flowers please, but if you wish to make a
donation to the Sumter County Humane Society www.sumterhumanesociety.org since she was
an avid animal lover Or to the League of the Good Samaritan at www.magnoliamanor.com it
would be appreciated. 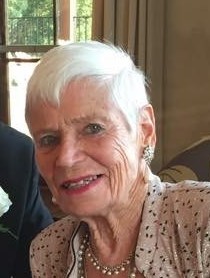