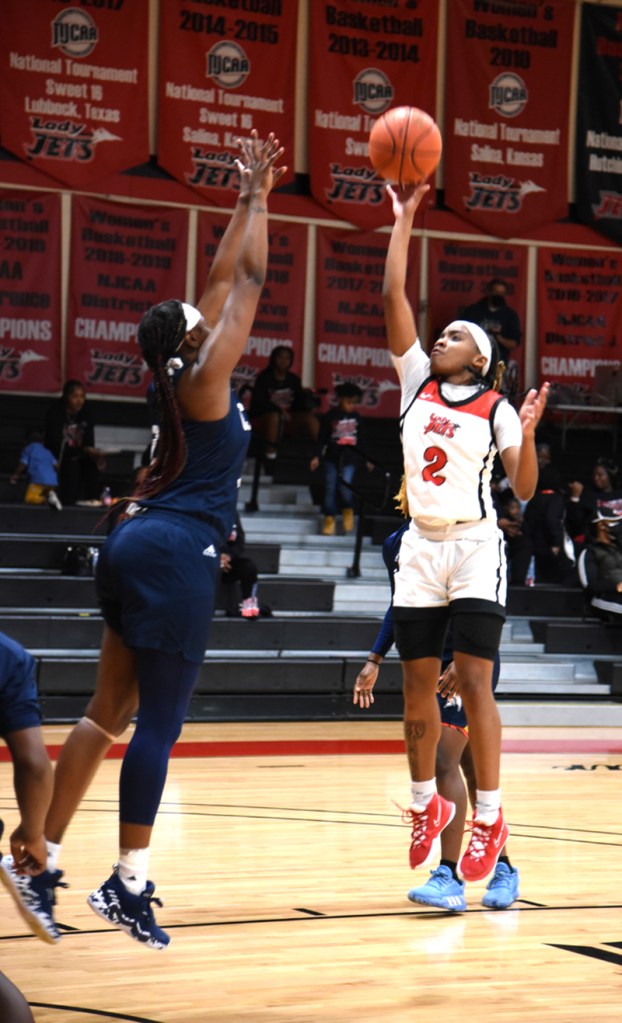 Sophomore guard Maikya Simmons (2) led the Lady Jets in scoring with 13 points in the win over Central Georgia Tech on Alumni-Sophomore Day in the Hangar. Photo by SGTC Athletics

“This was a great day for South Georgia Technical College,” said SGTC President Dr. John Watford.  We had eight former players from the SGTC 2001 – 2002 initial Jets team return. We had alumni from five of the past seven decades come back to campus as well as many former Jets, Lady Jets, faculty and staff.  And we won two basketball games!”

The highlight of the night was watching the South Georgia Tech Jets overcome a poor first half showing and secure the 86 – 65 win over Southern Crescent Technical College.  The Jets trailed 37 – 25 at the end of the first half but had been down by as many as 18 points before rallying in the second half to score 58 points and take the victory.  The win moved the Jets into 3rd place in the Georgia Collegiate Athletic Association (GCAA) with a 6 – 4 and 14 – 10 record.  Georgia Highlands is currently in first place at 8 – 1 and South Georgia State College is in second place with a 7 – 3 record. 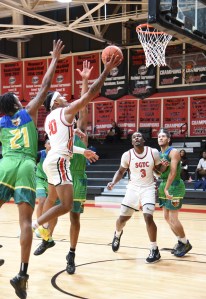 Marvin McGhee III (10) scored 24 points for the Jets in the come from behind win over Southern Crescent.
Photo by SGTC Athletics

Not a single Jets was in double-digit scoring after the first 20-minutes of play and sophomores Malik Battle and Marvin McGhee, III, were the leading scorers with only 6 points each at the half.  However, by the final buzzer sophomore guard Marvin McGhee, III, had acquired a total of 24 points, four rebounds, three steals and one blocked shot.  Sophomore Malik Battle was close behind with 21 points, two rebounds, and two steals.

Sophomores Will Johnston and Matika Milivojevic were the other two Jets in double figures.  Johnston came up with 15 points, two rebounds and five assists.  Milivojevic, who had been out with a hand injury, came out and accounted for 14 points.   He also had a rebound and three steals.

Rounding out the scoring for the Jets were Jalen Reynolds with seven points and Bryce Turner with five.

Prior to that exciting finish, the nationally ranked Lady Jets made quick work of Central Georgia Tech in an 83 – 62 victory.  The Lady Jets are currently 10 – 3 and 22 – 5 overall.  They are in second place behind Georgia Highlands in the Georgia Collegiate Athletic Association (GCAA) standings.  Albany Tech, East Georgia, Central Georgia, and Andrew College round out the standings in that order.

Five Lady Jets scored in double-digits in that match-up.  Sophomore guard Maikya Simmons was the leading scorer with 13 points.  Freshmen Alexia Dizeko and Fanta Gasama were close behind with 12 points each.  Sophomore Kamiya Hollingshed and Luana Leite both added 11 points to close out the double-digit scoring.  Loes Rozing and Laurie Calixte had seven points each, Camryn James added six, and then Mame Thiaw scored four points.

That was the last home game for the Lady Jets but the Jets will be back in action in the Hangar on Wednesday, February 9th at 7 p.m. when they host Gordon College.  Both the Jets and Lady Jets travel to Albany Tech on Saturday, Feb. 12th for a double-header with the Albany Tech Titans and Lady Titans at 1 p.m. and 3 p.m.  The Jets play at home again on Wednesday, Feb. 15th against Central Georgia Tech at 7 p.m.