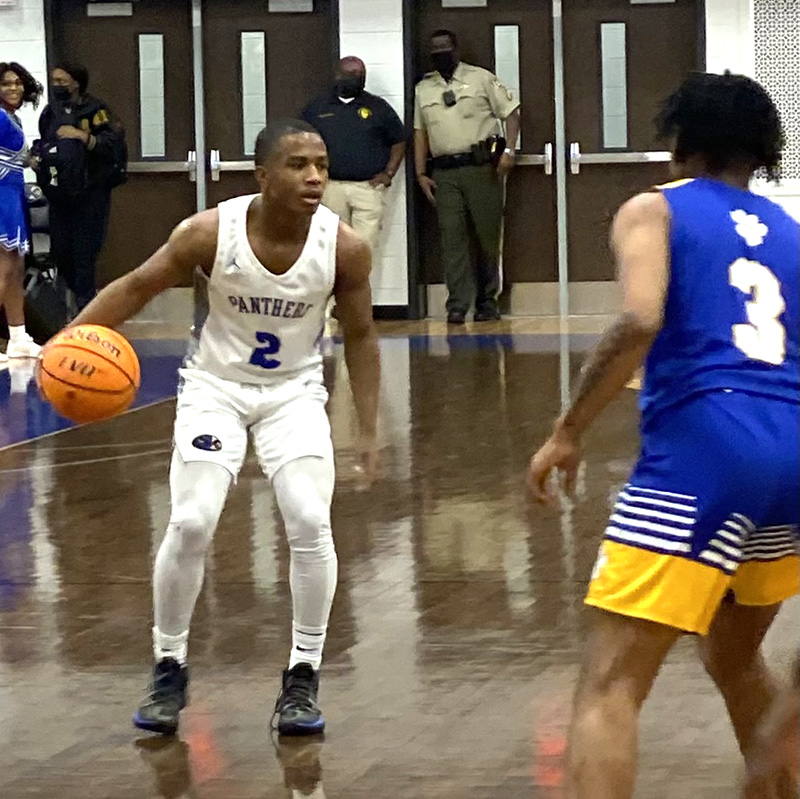 Sumter County junior point guard D.J. Hurley (2) led the Panthers in scoring with 15 points in their 52-38 victory over Crisp County in the semifinals of the GHSA Region 2-AAA Tournament. Photo by Ken Gustafson

AMERICUS – According to Sumter County Varsity Boys Head Basketball Coach Johnny Genwright, it was an ugly win, but he and his squad will take it. Though they weren’t clicking on offense and committed numerous turnovers, the Panthers were able to use their defense to minimize Crisp County’s scoring opportunities and went on to defeat the Cougars 52-38 in the semifinals of the Georgia High School Association (GHSA) Region 2-AAA Tournament on Thursday, February 10 at Sumter County High School.

With the victory, SCHS (24-2) advances to the Region 2-AAA Tournament Boys’ Championship Game against Peach County Friday evening at 8:30 p.m.

SCHS had three players score in double figures. D.J. Hurley led the Panthers in scoring with 15 points, Cameron Evans poured in 14 and Brandon Pope had 12 in the winning cause. 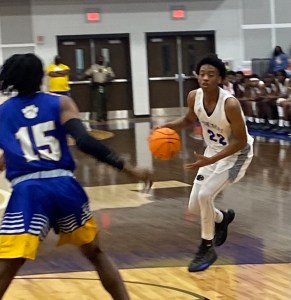 Sumter County junior guard/forward Brandon Pope (22) scored 12 points in the Panthers’ 52-38 win over Crisp County in the semifinals of the region tournament.
Photo by Ken Gustafson

As for CCH, Eric Ivory led the Cougars in scoring with 11 points and both A.J. Brown and Jamarion Chambliss chipped in seven. The Cougars (12-14) will face Upson-Lee in the third/fourth place game Friday afternoon at Sumter County High School.

The Panthers jumped out to a 6-0 lead in the first quarter and that run was capped off with a basket from Hurley with 4:21 to go before CCH called a timeout.

Out of the timeout, the Cougars exploded with 10 unanswered points, including a three-pointer from Chambliss. However, the Panthers were able to retake the lead at 11-10 near the end of the quarter. Early on, it appeared that this game between these long time rivals was going to be a fierce back-and forth affair the rest of the way.

Both teams traded baskets in the early minutes of the second quarter, but Kyric Davis gave the Panthers a 15-14 lead on two foul shots. Over the next couple of minutes, both teams played at a fast, up and down pace and traded a couple of baskets, but with 4:26 to go before halftime, Ty’Quan Robinson scored on a fast break layup to give SCHS a 21-17 lead. Brandon Pope would later get fouled while shooting and hit the first of his two free throws, but on his second free throw that was missed, Canaan Jackson was there for the rebound and the put back to give the Panthers a 24-17 lead.

With 1:31 to go before halftime, Ivory drilled a three-pointer to cut the Panthers’ lead to 24-20, but SCHS responded with five straight points to take a nine point lead and would eventually go into halftime leading 29-22.

A.J. Brown drilled a three-pointer just seconds into the third quarter to bring the Cougars within four, but Hurley responded with a three-pointer of his own and Pope would later score to give the Panthers a 34-25 lead. Both teams continued to play at an up and down, fast pace and traded baskets, but with a little less than four minutes left in the third quarter, Cameron Evans drove base line and scored on a running one-hander to give SCHS a 39-31 lead. Shortly thereafter, Robinson followed that up by scoring via dribble penetration. Having been fouled on the play, he converted the foul shot for the three-point play and gave the Panthers a 42-31 double-digit lead.

Ivory would later drain a three-pointer to bring the Cougars to with eight, but over the final two minutes of the third quarter, the Panthers were able to keep CCH from making a big run and took a 46-36 lead in the waning seconds of the quarter on a jump shot from Evans.

Over the first two minutes of the fourth quarter, both teams continued their up and down style of play, but neither team could score a point. Both teams also seemed out of control and were committing turnovers. It wasn’t until the 3:43 mark that the first points of the fourth quarter were scored when CCH guard Mariek Thomas scored on a layup to cut the Panthers’ lead to 46-38. This prompted Genwright to call a timeout to get his team to regroup.

Out of the timeout, things changed for SCHS as the Panthers scored eight unanswered points to effectively seal the game. Evans scored the first point of the quarter for SCHS on a free throw after getting fouled and Hurley would later knock down two more foul shots to increase the SCHS lead to 11. Shortly thereafter, the Panthers forced a turnover and Evans scored on a fast break layup. Having been fouled on the play, he made the free throw to give the Panthers a 52-38 lead. That ended up being the final score of the game, as neither team could score after that.