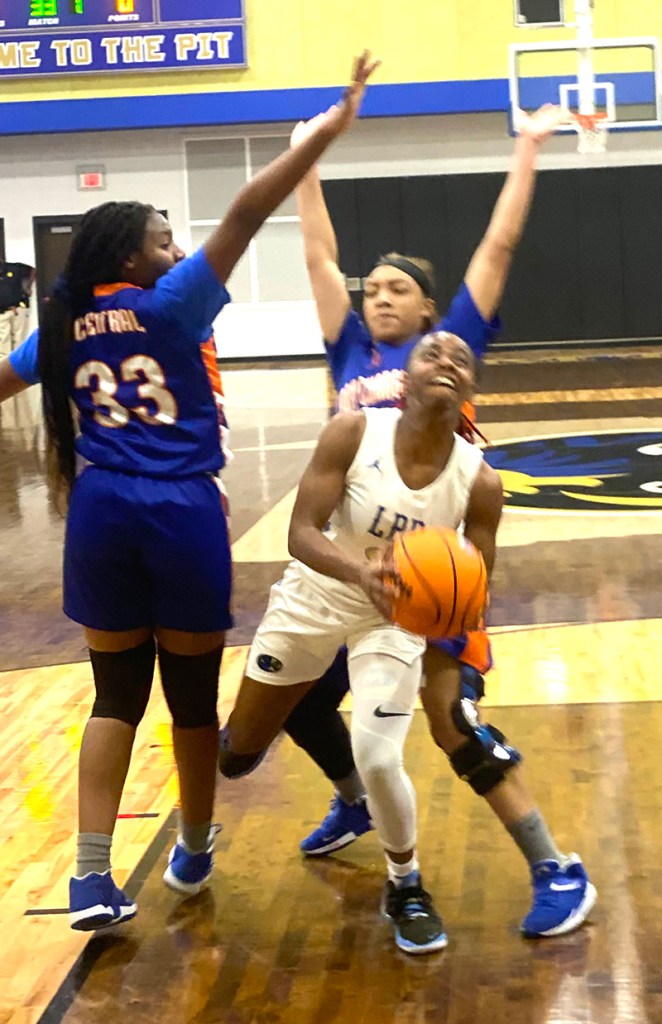 Sumter County senior point guard Tiffani Goodman (3) drives through the lane against Central-Macon in the Region 2-AAA Tournament championship game. Goodman led the Lady Panthers in scoring with 25 points, including 15 in the fouth quarter to lead SCHS to a region title. Photo by Ken Gustafson

AMERICUS – As one might expect, the championship game of the girls’ Georgia High School Association (GHSA) Region 2-AAA Tournament between the region’s top two teams, the #1 seeded Sumter County Lady Panthers (SCHS) and the #2 seeded Central-Macon Lady Chargers (CMH), lived up to the hype. Both teams showed their skill and tenacity at both ends of the court throughout the entire contest. However, their could only be one winner, and on Friday night, February 11 at the Pit Gymnasium on the new SCHS campus, it would be the Lady Panthers who would claim the region prize, thanks to senior point guard Tiffani Goodman. Goodman came through in the latter stages of the game with several big baskets and foul shots down the stretch to lead the Lady Panthers to a 47-35 victory over CMH and a region championship.

According to SCHS Head Coach Sherri Harris, this is her second region championship since she’s been at the helm of the SCHS girls’ basketball program. The first was in 2015, when the school was named Americus-Sumter and the team was led by ASHS standout guard A’Tyanna Gaulden.

With the win, the Lady Panthers improve to 21-6 on the season and will be the #1 seed out of Region 2-AAA in the upcoming Georgia High School Association (GHSA) Class AAA State Tournament.

“She (Goodman) knocked down a bunch of baskets right their at the end,” Harris said. Harris went on to say that senior center Trinity Jackson struggled in the first half, but was able to come alive in the third quarter before, in her opinion, Jackson got some bad breaks on some of the calls from the referees. “We had to make that adjustment, but our freshman came in and contributed,” Harris said. “Sheldon (Madison) stepped in and gave us a huge, huge swing to help the team. She got a couple of key rebounds. I think she only had two points in that duration, but we did an isolation with Tiffani at that time, so that helped out,” Harris continued. 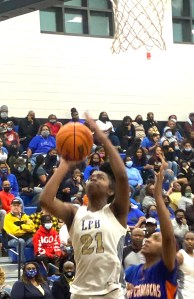 Goodman led the Lady Panthers with 25 points, but 15 of those points came in the fourth quarter, when it mattered the most. Included in those 15 points were nine free throws made by Goodman. Jackson scored six points on the night and both Kaylin Holley and Madison Shelton scored four for the Lady Panthers in the winning cause. Both Cornecia Luster and Haley Moore each hit a three-pointer and Aviyonna Clemons scored two points to round out the SCHS scoring.

As for CMH, the Lady Chargers fall to 21-5 and will be the #2 seed out of Region 2-AAA in the state tournament. They were led in scoring by Taliah Grier’s 15 points.

After an evenly played first quarter between both teams, the Lady Panthers trailed CMH 10-7, but the Lady Chargers jumped out to a 13-9 lead early in the second quarter on a three-pointer by Kayla Pryor. However, that seemed to wake up the Lady Panthers on both ends of the court. They were able to force turnovers and went on an 8-4 run that was powered by the outside shooting of Cornecia Luster and Haley Moore, who each drained a three-pointer. By halftime, the scored was tied at 17-17. This game was shaping up to be what a region championship game should be: a hard-fought, back-and-forth affair between the region’s top two teams.

Both teams started out slow early in the second half, but the Lady Panthers started heating up offensively midway through the third quarter. On three separate occasions, Goodman was able to lob the ball into Jackson for a basket. On the third occasion, Jackson gave SCHS a 25-20 lead.

With a little over two minutes left in the third quarter, SCHS led 25-22 and the Lady Panthers decided to slow their offense down to run some clock. Then with 1:15 left, Goodman drove to the basket and was fouled, but missed both free throws. CMH took advantage by scoring four unanswered points to take a 26-25 lead going into the fourth quarter.

With 7:29 left to go in the game, Madison Shelton gave the Lady Panthers the lead with a basket on the inside. Then off a missed shot by CMH, Goodman got the rebound and went coast to coast for a layup, electrifying the SCHS fans in the Pitt.

After a timeout called by CMH, the Lady Chargers tried to inbound the ball underneath their basket, but Goodman came up with a steal, scored another transition layup and was fouled on the play. The senior point guard sank the foul shot to complete the three-point play to give the Lady Panthers a 32-26 lead. Shortly thereafter, Kaylin Holley, who came through in a huge way for SCHS the night before with four three-pointers, drilled another shot from beyond the arc to give SCHS a 35-27 lead. The Chargers would get a basket shortly thereafter, but the momentum was overwhelmingly on the side of the Lady Panthers.

With 3:24 to go in the game, Pryor was fouled and made one of two foul shots for CMH. SCHS had a chance to respond when Goodman was fouled while driving to the basket, but she couldn’t knock down the free throws. On their next possession with a little over two minutes left, the Lady Panthers tried to run more clock and Goodman was fouled again. This time, she made one of her foul shots to give SCHS a 36-30 led. Grier scored for CMH to cut its deficit to four, but Goodman knocked down a jumper to push the SCHS lead back up to six with 1:11 to go. The Lady Panthers were a little over a minute away from their first region championship since 2015 and a #1 seed in the upcoming GHSA Class AAA State Tournament.

The Lady Chargers tried to press SCHS full court, but Goodman was able to get the ball across the timeline before being knocked to the floor by a CMH player. The officials called a flagrant foul on the player, as well as a personal foul. Goodman then calmly sank all four foul shots to give the Lady Panthers a 42-32 lead. With 57 seconds left, the Lady Panthers tried to run more clock before Goodman was fouled again. She made one of the foul shots to give SCHS a 43-32 lead. At this point, the Lady Chargers were not able to make a last ditch effort to get back in the game and the Lady Panthers would go on to win the region championship by the score of 47-35.

As the #1 seed from Region 2-AAA, the Lady Panthers will host their first round game in the state tournament. Stay tuned to the Americus Times-Recorder for further updates as far as date, time and opponent.