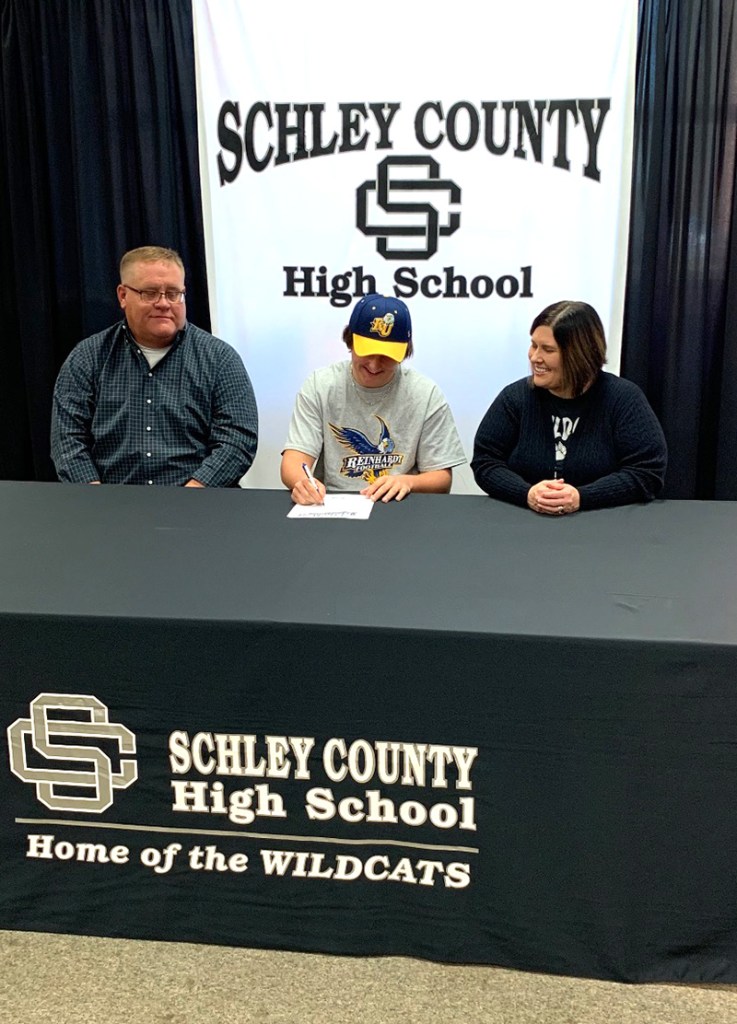 ELLAVILLE – Schley County senior middle linebacker Sidney Blackwell realized his life-long dream on the morning of Wednesday, February 16 when he signed a letter of intent to continue his education and play college football at Rheinhardt University (RU), an NAIA school in Waleska, GA, about an hour north of Atlanta.

Blackwell garnered interest from Point University, Kennesaw State and Sewanee University, but in the end, he felt that RU was the best fit for him.

“I really like the facilities and the family they’ve got there,” Blackwell said. “It feels like a very at-home place, small-town vibes and it feels like somewhere I can play well at and have a fun time.”

According to maxpreps.com, Blackwell had a total of 115 tackles, including 46 solo tackles for an average of 9.6 tackles per game. He also had four sacks on the season.

For the past several years, Schley County Head Football Coach Darren Alford has witnessed Blackwell’s growth as a player and as a person both on and off the field.

“Sidney is a team captain for us so he ‘s been one of those guys that has been a leader the whole time,” Alford said. “He got here in the eighth grade, I believe. That’s when he started here. When he came up as a ninth grader, I knew he was going to be good because he showed a great deal of toughness for a young kid and over the last four years, he has really bought in to what we’re trying to do in the weight room. He’s worked hard and he’s got a good Mom and Dad that has pushed him along the way and helped him out there too. He’s one of those kind of kids that you can’t replace. You’ve just got to try and find somebody else that is going to step up and do the job. Sidney’s just a good player all around and he’s a better human being than he is a player. You get to coach those kind of kids every once in a while and I’m very fortunate that I had the opportunity to coach Sidney and to be on the side line with him and watch him grow. I’m excited about the things that he’s going to be doing in the future also.”

While he currently is unsure about his plans after graduating from RU, Blackwell plans on majoring in business.