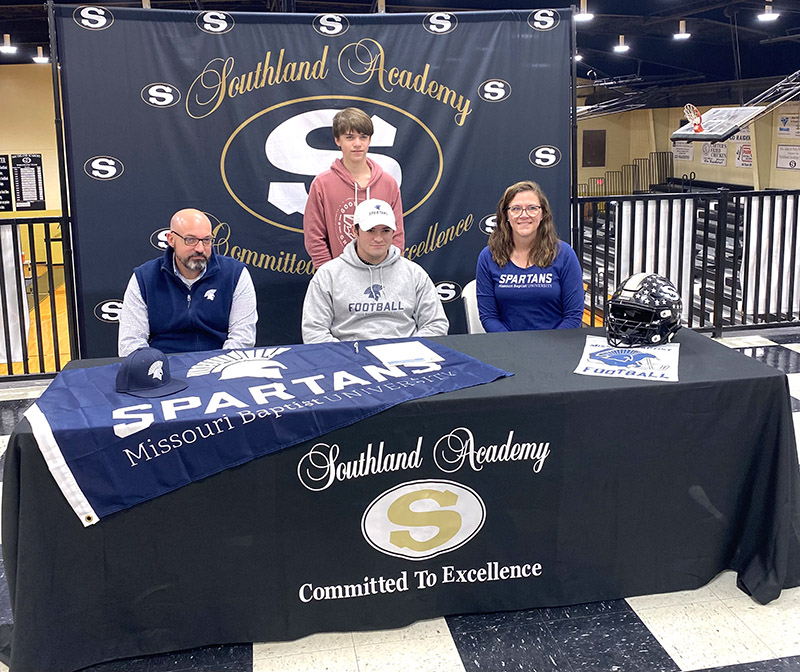 Southland Academy senior offensive lineman Kolden Kinney (middle) signed a letter of intent to play college football at Missouri Baptist University. To the left of him is his father, Rev. Buck Kinney. To his right is his mother, Beth Kinney and behind him is his younger brother, William Kinney. Photo by Ken Gustafson

AMERICUS – For another local high school football player, his hard work over the past several years has paid off. On Wednesday morning, February 16, in front of a large crowd of family and fellow students in the lobby of the Melvin Kinslow Gymnasium on the Southland campus, Southland Academy senior offensive lineman Kolden Kinney signed a letter of intent to continue his education and to play college football at Missouri Baptist University, an NAIA school in St. Louis.

Kinney caught the interest of other schools as far away as Kansas and Minnesota and those schools invited him to come for a visit, but in the end, having experienced first hand the culture of MBU on his visit to the school, Kinney and his family decided that there was no need for further visits and that MBU was the best place for him.

As far as how the MBU coaches plan to use Kinney, he said that he has been told that he won’t be playing on the line due to his size at 5’11, but will be used more at other positions.

“Being here at a smaller school, I was playing lineman, but at the next level, my size wouldn’t necessarily be a lineman, so I’ll be playing more of a fullback/H back position,” Kinney said.

Southland Head Football Coach Rod Murray believes that the hard work that Kinney put in while competing for the Raiders will enable him to make an impact on the MBU Football Program.

“Kolden is a hard worker. He shows up to work every day with a great work ethic,” Murray said. “He’s shown it throughout his career for a number of years in a row and we’re so proud of him. We wish him the best and he’ll create something great in that locker room like he did for us for the last four years. We’ve had a great time with Kolden.”

Kinney plans on majoring in Exercise Science while at MBU and would like to be a football strength and conditioning coach after graduation.