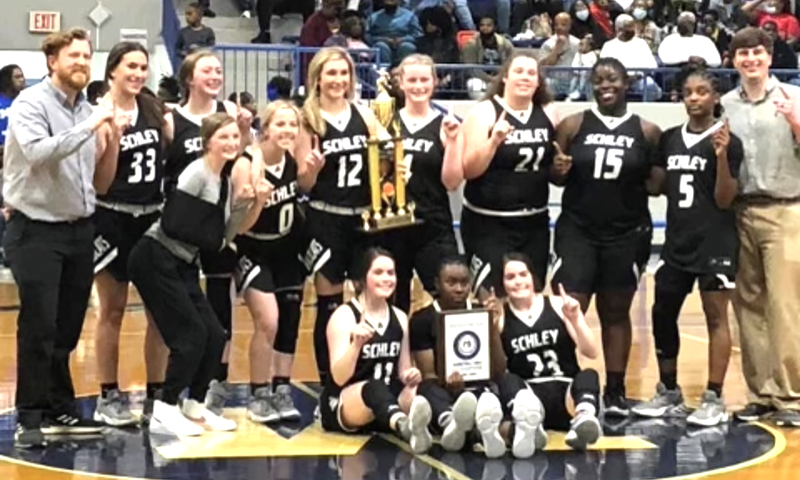 MANCHESTER, GA – The Schley County Lady Wildcat basketball team captured its first region title in school history with a 59-40 victory over Taylor County in the championship game of the Region 5A-Public Tournament on Friday, February 18 at Manchester High School in Manchester, GA.
As a result, the Lady Wildcats (17-4) will be the #1 seed and will host their first round game of GHSA Class A-Public State Tournament on Tuesday, February 22.
“I’m really proud of our girls and their entire body of work this entire season,” SCHS Head Coach Brent Moore said. “They bought into this team program in the spring when I was hired, worked as hard as anyone throughout the season and they saw it all pay off tonight.”
For the five Wildcat seniors, Landry Whaley, Sarah Barnhill, Berkley Goodin, Patience Solomon and Liberty Justice, it was a night they will never forget, as they went out as region champions.
“I’m really happy for our five seniors who get to go out as region champions,” Moore said. “They’ve laid the foundation and proved that we can compete for championships here at Schley County.”
Moore also praised his freshman point guard, Jesstynie Scott, and his senior guard Berkley Goodin for their performances in this game and throughout the season. Scott led the way for SCHS with 22 points.
“Jesstynie Scott showed again that she is the best player in the region,” Moore said. “She and Berkeley Goodin we’re chosen to the all-tournament team, so I am really proud of both those girls.”
In addition to Scott’s 22 points, SCHS senior guard Sarah Barnhill also made a strong contribution by scoring eight points on the night.
The Lady Wildcats will find out who their opponent will be on Tuesday night, when they will host their first round game of the GHSA Class A-Public State Tournament. Opponent and time of tip off are still to be determined. Stay tuned to the Americus Times-Recorder for further updates.