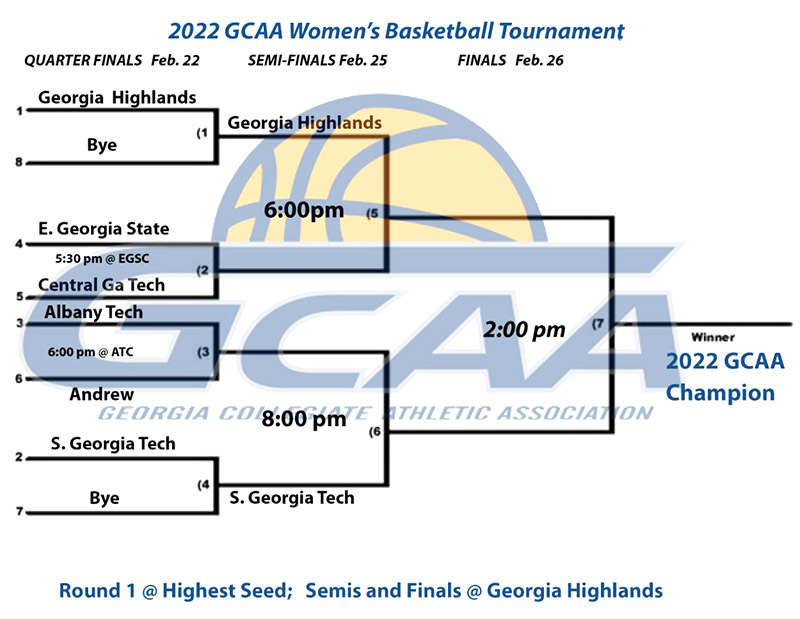 This is the tournament bracket for the upcoming Georgia Collegiate Athletic Conference (GCAA) Women’s Basketball Tournament. Photo by SGTC Athletics

“It was good to end the season with a win,” said South Georgia Technical College Athletic Director and Lady Jets head coach James Frey.  “I told the team in the locker room after the game, an ugly win is better than a pretty loss.  I credit East Georgia.  They played incredibly physical and hard.  We have to be much stronger on the board and handle the physicality.  Saturday, we didn’t handle it well.  We will spend a lot of time on that film and hopefully we will understand what needs to be done.”

Coach Frey had words of praise for freshman center Fanta Gassama. “I thought Fanta Gassama carried us.  East Georgia did a great job of guarding us at the three-point line, particularly Kamya Hollingshed.  They really hounded her all game and the one open look she had was with under two minutes to go and it was big.  It put us up by one but Fanta established herself inside and in the fourth quarter we went to her repeatedly and they had a tough time guarding her.” 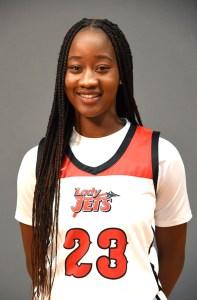 Freshman Fanta Gassama was the top scorer for the Lady Jets in the win over East Georgia. She had a total of 22 points and 16 rebounds.  She was eight of 13 from the field and six of eight from the foul line.  She also had an assist, a steal and two blocked shots.

Another freshman, Luana Leite was the only other Lady Jet in double-digits and she had 13 points.  She was five of 11 from the field and three of five from the free throw line.  Freshman Alexia Dizeko added nine points and sophomore Maikya Simmons contributed eight points and had five assists. Sophomore Kamya Hollingshed and freshman Camryn James both wound up with four points and then Loes Rozing and Laurie Calixte closed out the scoring with two points each.

The nationally-ranked Georgia Highlands Lady Chargers captured the GCAA regular season title with a 15 – 0 record this season and earned the right to host the NJCAA end of the season Region XVII tournament in Rome on February 25th and 26th.

South Georgia Tech’s Lady Jets finished in second place with a 12 – 3 and 25 – 5 performance.  All three of the 9th nationally ranked Lady Jets losses came at the hands of the NJCAA’s third-place Georgia Highlands Lady Chargers.    Both the Lady Jets and the Lady Chargers will receive a bye in the first round of the NJCAA Region XVII end of the season tournament.

“We are excited to finish the regular season, 25 – 5, but we also know now that everyone starts over and is equal,” said Coach Frey.  “We are all 0 – 0 going into the tournament and it’s a two-game season for us now.”

“Drawing the winner of Albany Tech and Andrew is good for us just because we played East Georgia the other day and I wouldn’t want to play them back to back games,” said Coach Frey.  “Regardless of who we play, I am proud of our team’s progress.  Playing nine freshmen and two sophomores, if you had told me we were going to be 25 – 5 before the season, I would have taken it.  I have seen considerable improvement since the October jamborees and hopefully we are ready to take the next step and win another championship.”